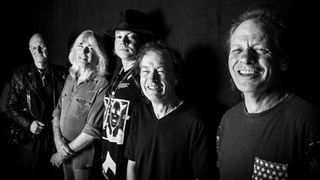 Axl Rose says he approached AC/DC to offer his services when he heard the news about Brian Johnson.

The Guns N’ Roses frontman also says in his first interview since landing the job that he just hopes to “do it justice for the fans” when he fills in for Johnson on the remainder of AC/DC’s Rock Or Bust tour dates, starting in Lisbon this weekend.

Rose tells the BBC: “I called the day I read about it in the news, that there was a situation going on with Brian’s hearing.

“I knew there was going to be a problem with having dates on sale and dates sold and stuff like that. So if I could help, and if I was able to do it, and they were interested, I’d love to help. And that’s how it started.

Johnson was ordered to stop touring or risk going deaf. And rather than cancel the rest of the tour, Angus Young and co started a search for a guest singer.

Rose adds: “A lot of the Back In Black stuff is really challenging. I’m not here in any way out of any disrespect to Brian. I can’t take anything away from his singing at all.

“He’s a great singer and it’s really challenging to sing it. I’m just trying to do it justice for the fans.

“I’m happy and excited in one sense, but I think it would be inappropriate to be celebrating, in a certain way, at someone else’s expense.

“That’s not what I’m here to do. It’s an unfortunate situation.”

Young moved to squash any rumours that the split with Johnson was acrimonious, insisting he spoke with the vocalist at length before he decided to step down.

Young says: “In his heart he wanted to finish the tour, but because of that hearing factor he had to make the decision.

“It’s a hard thing to do, and he’d had the problem since we kicked off touring. It was his call. It was a shock to us too.

“The last thing you want to do is walk away from something, but you don’t want someone in a tragic situation – being deaf, or any other affliction.”

Meanwhile, the creator of the in-ear monitors used by many professional singers claims to have developed a new piece of technology that could help Johnson return to action.

Stephen Ambrose of Asius Technologies says: “This is an open message to Brian Johnson of AC/DC. Please don’t stop performing, help is on the way.”

Ambrose says his ADEL (Ambrose Diaphonic Ear Lens) device is a safer, more modern take on his original in-ear monitors and that he now knows the earlier models could cause permanent hearing damage.