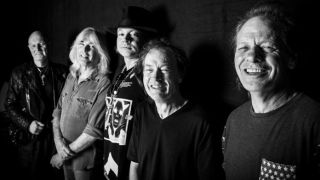 AC/DC guitarist Angus Young says the band did not fire Brian Johnson after his hearing issue hit the crisis point in March, despite rumours to the contrary.

Last month, the group announced Axl Rose would step in to replace the singer on the Rock Or Bust tour, while Johnson issued his own statement confirming the severity of his health issue.

Young and bassist Cliff Williams clarify what went down with Johnson’s departure in a newly-released video.

Young explains: “You get a lot of rumors out there; a lot of people think Brian was fired. That’s not the case. It was mainly his hearing. He already had a very bad ear, and the good ear that he had left was dropping rapidly. I mean, it was an ongoing issue all the way pretty much through the tour from the beginning.”

Williams continues: “He had an instance where there was a marked drop in that one good ear and it came back, but not completely. The doc told him this can happen again and it may not come back. So, you know, you kind of go ‘What do you do with that?’”

The guitarist adds: “It was out of our hands. It was his call, what he felt.”

Rose will be on board for AC/DC’s 12-date European run and the to-be-rescheduled US dates sometime later this year, and is willing to continue with the group beyond 2016 if there’s a place for him.

Rose tells the BBC: “There’s makeup dates in the States, and if I don’t get thrown out before then, I’m looking forward to doing them.

“I think after that, it’s about what they wanna do. I’m in if they want me in, and we’ll sort it out, but right now that’s getting ahead of ourselves with everything else that’s on the table.”