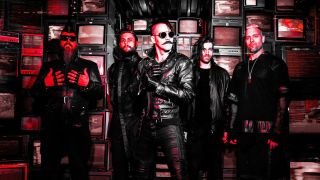 3Teeth have released their new video for Altær exclusively with Metal Hammer.

The song has been taken from the band’s latest album Metawar, which was launched last year through Century Media.

The promo mixes footage from the Mojave desert’s post-apocalyptic Wasteland Weekend festival with shots of the band playing live.

Frontman Alexis Mincolla tells Metal Hammer: “The vibe was immersive to say the least, and when temperatures dropped to about 40 degrees and the wind speeds kicked up to about 50 mph, it made for a very wild night.”

Speaking about the song last year in an exclusive Metal Hammer track-by-track guide to Metawar, Mincolla said: “Standing upon the fulcrum of our own extinction at the altar of change, we attempt to alter our DNA in a sort of failed promethean jail break from our own alien planet. Nothing will change until its too late."

3Teeth are currently gearing up for their UK and European tour, which will get under way in Nottingham on February 1. They’ll then head back across the Atlantic in March for a co-headline tour with Carnifex.