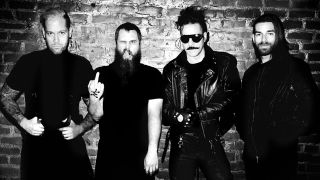 Los Angeles’s 3TEETH may sound like a dodgy horror b-movie, but there’s nothing budget about their biting sound. Citing heavyweights such as Ministry, KMFDM and Skinny Puppy as influences, the band have one foot firmly rooted in the 90s industrial scene, but there’s an experimental deftness to their new album. A twisted melange of vicious grooves and post-apocalyptic soundscapes offset by EBM flourishes, shutdown.exe. is not only 13 scintillating songs, but a conceptual statement regarding the world we live in.

“The lyrical themes are centred around the idea of shutting down consensus reality tunnels,” explains vocalist Alexis Mincolla. “We live in this era where everything is already protested against and it’s done so ineffectually… the only thing we really can protest against ourselves is ourselves. It’s about hacking your own consciousness and uninstalling your own operating system to move forward.”

Terminator-esque computer allegories aside, recent single Atrophy is a scathing homage to humanity’s “infobesity” epidemic and our obsessive need to be permanently attached to our mobile phones and computers, and features the lyrics ‘Consumed by the way you try to fill voids deep inside/ All I see is vanity and I don’t want to be/ I can’t fill your self-identity.’

It’s a vision that’s equally compelling and confusing, but there’s no denying 3TEETH’s sonic pull – and they’ve got fans in high places. At the start of 2016, they embarked on a mammoth US tour supporting alt-rock titans Tool, taking to 20,000 capacity venues to conquer audiences unfamiliar with such anarchic anthems and pummelling beats. Having been handpicked by Tool themselves, this was no small mountain to climb.

“I’ll never forget [Tool guitarist] Adam Jones saying, ‘Whatever happens just keep doing your thing, ’cause our crowd can be tough’ and I was like, ‘Oh fuck!’” a laughing Alexis recounts. “But people applauded and the performances just got better – by the end of the tour it was all pranks and it was just awesome.”

With an ever-increasing fanbase, not to mention a newly instilled confidence coming off that Tool tour, their previous success looks set to continue with the release of shutdown.exe. this month alongside a hefty touring schedule – which will include UK dates. But Alexis is looking towards the future with all the humbleness of a guy who just lives for making music.

“Me being able to afford the kind of life that allows me to be making art on a constant basis is just incredible,” he says excitedly. “But to do it on a larger scale with more resources in an arena is even more incredible. As an art designer and director, I’ve been making all these plans for when we can do this. That goal is definitely the dream.”

shutdown.exe. is out now via OMF