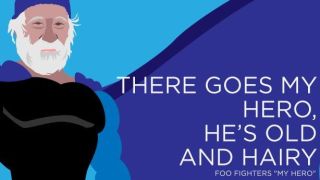 These past few weeks have been strange and spiritually empty. We’ve not really heard much about Dave Grohl or the Foo Fighters, apart from that jam with Prophets Of Rage. Are they on holiday? We wish they’d said. Maybe they’re making a new album at Studio 606 in Los Angeles. To cheer ourselves up, we hunted down the finest Foo Fighters memes on the internet and caught them in our special net.*

*We just saved them to the desktop, but that doesn’t sound half as heroic.

The Foo Fighters’ 2007 single The Pretender birthed so many memes. Apparently these aren’t the correct lyrics. Now we feel stupid. We did wonder why he compared himself to a soaking mammal.

This we did know. So the joke’s on whoever made this one. Not sure why this drawing of Nicolas Cage is so aggressive about it, though.

The Best Of You was a popular one for piss-takers everywhere. It makes you wonder if Ashleigh’s family deliberately got a Dave Grohl cake just so they could create this sweet meme. If so, good work.

Again, these aren’t the correct lyrics to the band’s 1998 single My Hero. But he’s bound to know some cool hirsute pensioners. So who’s the stupid one now, eh? Oh.

Here’s ‘Stoner Stanley’ or ‘Really High Guy’ getting things wrong. It doesn’t matter if he looks as high as balls, he’s trying his best. At least he got the band’s names right.

Here’s Willy Wonka, swooping in and being all righteous and stuff. If he paid less attention to other people’s mistakes and more to his chocolate factory, there might be less on-site fatalities involving suction tubes and the like.

As soon as one fan learned about the crack in Dave Grohl’s leg following a tumble in Sweden, they were on the internet with this These Days meme before the plaster cast had even set.

Imagine being a priest and having Dave bellow at you through the wall. This particular man of the cloth looks sad. He preferred his work in Scream.

Onto another religiously-themed meme. They do say Dave is one of the nicest people in rock, but we’ve never seen him heal the sick or do that thing with the wine. Would be handy on tour when the rider starts to run dry. There’s some fish too? Boom. You’ve got yourself a backstage picnic.