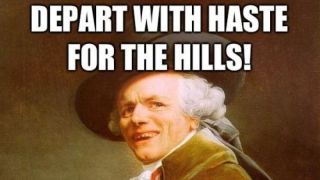 With millions of fans around the world, highly quotable lyrics and a lurching undead mascot named Edward, it’s obvious that Iron Maiden would inspire a ton of memes. Some of them offer a painful comment on the human condition and one even features Xzibit when he was making cars look stupid on Pimp My Ride.

So, with this virtual buffet of funny staring us in the face, it would be rude not to grab a plate and start piling that stuff on…

That’s just classic Bad Luck Brian to a T. Mind you, it was probably that sleeveless tartan jumper which got Eddie’s hackles up. Imagine if Eddie found himself on a Scottish golf course. There’d be a massacre.

If that happened in real life, we’d be fucking livid. If your friends try to pull this sort of stunt on you, drive them up to the top of a very snowy mountain and leave them there until they apologise.

No, they’re not. You silly sausage. The ‘O’ is similar and that’s it. Now get back to gawping at your mates having a kiss and a cuddle.

Look at his face. It’s literally one of the worst things that could happen. And we’re saying that as people who’ve stepped on a plug and ordered a small pizza by mistake.

According to the fine people at KnowYourMeme.com, this Xzibit meme started in early 2007 following his success on Pimp My Ride. The rules are as follows: “Yo Dawg, I heard you like (noun X), so I put an (noun X) in your (noun Y) so you can (verb Z) while you (verb Z).” So now you know, dawg.

We thought that once. We even asked the historian John Higgs to research Maiden’s lyrics and here’s what he thought. We doubt the education bodies would be able to afford an animatronic Eddie, what with all the cutbacks and academies and stuff.

The star of this meme is known as ‘Stoner Stanley’ or ‘Really High Guy’. The ruddy-cheeked chap appeared on Reddit around five years ago and captions imply that he’s not compos mentis due to probably being very tired and a bit peckish. Still, he’s having a go at singing along and that’s what matters. Just make sure you’re not standing next to him next time you go to a Maiden gig.

Poor Beast. On March 21, 1982, he bought one of those plastic phones with a dial on the front. The next day, he was plagued with calls from rock fans asking if the ‘sacrifice was still going on tonight’. Oh, and that scream. Those shitted him right up.

Here’s the kind-faced American actor Jonathan Goldsmith, who appeared as The Most Interesting Man in the World in an ad campaign for Dos Equis beer. Following on from Joseph Ducreux’s banter, he’s offering a different take on the band’s 1982 single. And he appears to have morphed into The Trooper-era Eddie, which was released during the following year. Mind you, it could be those beers on the table. Always drink responsibly.

A good point, well made. But, to be fair to Angela Merkel, the German chancellor isn’t hauling around tons of equipment on a continent-hopping world tour. But that plane is so little. Aw.