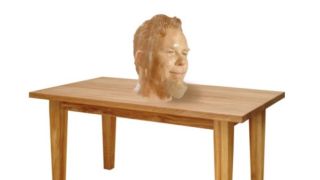 Memes are the smart-arses of the internet. A band or celebrity can’t take a misstep without it being turned into a sarcastic image which will normally spread like wildfire.

Here at TeamRock HQ, we’ve been doing a lot of work on Metallica since the band released a new single late on Thursday evening. Since then, we’ve noticed the classic Metallica memes slowly creeping back into our social media feeds. Here are 12 of the very best – and yes, the Fuel one is there. How could it not be?

Here’s Unpopular Opinion Puffin going out on a limb about Metallica’s contentious 1996 album.

Trust Bad Luck Brian to pick this classic Metallica instrumental. Do you have a friend like him? If not, we’re sorry to say it’s probably you.

Some Photoshop wizard has transformed the mannequin bust from the Lulu album artwork into the ‘Tallica sticksman. If this photo popped up on Tinder, we’d turn our phone off and throw it in the sea.

While we’re all big fans of Kirk Hammett’s use of wah wah – you can even get the Dunlop Kirk Hammett Signature Cry Baby Wah Pedal – some people on the internet aren’t so keen and royally took the piss with this comic strip below. We’re certain Kirk doesn’t hold business meetings in a badly-fitting suit.

This meme of Maria von Trapp serenading the kids about the horrors of war has done the rounds. It’ll probably give some people nightmares, though.

This is the daddy of them all. If you type ‘GIMME FUE’ into Google’s image search, it’ll take you a wall of Hetfield images yelling the opening lyrics to the 1997 song Fuel. Not sure what dabajabaza is, mind. Is it a dip?

This one is completely implausible. Who orders salad at a drive-thru? Chips are salad, if you really think about it.

A simple question answered with a succinct reply.

Here’s American actor Jonathan Goldsmith, who appeared as The Most Interesting Man in the World in an ad campaign for Dos Equis beer. He’s a man who could charm the leaves from the trees and, while he’s threatening to be a noisy nuisance, you don’t really mind because of his kind face.

Disaster Girl has been a meme since 2007, since Dave Roth – no, not the Diamond variety – took a photo of his daughter Zoe observing a blazing building. In this meme, a Metallica disagreement has been quickly curtailed with a little bit of fue, fai and a dash of dabajabaza.

On Metallica and Lou Reed’s 2011 song The View, Hetfield baffled fans everywhere with his assertion that he was a table. Whatever it means, it inspired a load of furniture-based memes including this Ikea instruction booklet.

And this literal interpretation. Looks sturdy, although we’d feel a bit awkward putting magazines on top of Hetfield’s head.

Metallica’s new album, Hardwired… To Self-Destruct will be released on November 18.