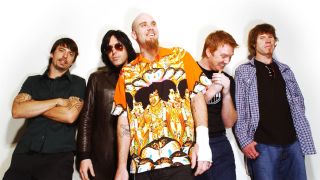 Queens Of The Stone Age in 2002 (Image credit: Hayley Madden\/Redferns)

With the proverbial ‘I’m outta here!’, Dave Grohl left the sessions for the difficult and near-disastrous One By One record – the band’s fourth – and took a break.

With a working man like Dave, though, ‘break’ means ‘go and toil elsewhere’ and hooked up with Queens Of The Stone Age as anchor on their defining Songs For The Deaf album and subsequent under-the-radar club portion of their meteoric tour.

The Queens, featuring Kyuss alumni Josh Homme and Nick Oliveri, had already established themselves as a commercially successful drug and drink rock party on loose-bolted mag wheels, but with Grohl’s name and tornado-like grooves, QOTSA would become unstoppable.

“It was one of those things where everybody knew there was something wrong and everybody was frustrated but we weren’t talking about it, if you know what I mean,” said Foo Fighters guitarist Chris Shiflett about the hi-tech hassles surrounding One By One. “It was just like you know something’s off but you don’t want to really say to the next guy (laughs) and I’m really glad that Dave did. Of course, then there was that feeling of like, ‘Wait, are we breaking up? Is that what this means, like taking a break is a nice way of saying breaking up? But it didn’t take too long to work out that wasn’t the case.”

Working meticulously on the record for nearly a year, it took a scrapping of the original recordings, a shift in studios from Dave’s home digs in Virginia to Los Angeles, and perhaps most pointedly, Dave taking out his frustrations with some very live, very loud, very incendiary QOTSA rock to get the album finished.

In an interview with The Fade’s Samantha and Michele, Dave expressed his admiration of Homme and Oliveri’s band, his relationship with the guys instigated when Grohl and Nirvana bassist Krist Novoselic caught Kyuss live in 1992, the association furthered when Dave asked the band to back up the Foo Fighters on their 2000 Nothing Left To Lose tour.

“I love this band,” explains Grohl. “I’ve known them for years and they invited me to play on this record. Seriously, they’re one of my favourite bands and I haven’t played drums in a long time. It’s great music to play drums to. They’re amazing live and they needed a drummer, so I thought I’d do it. It’s a nice change of pace. Not being in the spotlight is kinda nice. It’s really about just playing the drums. I feel much more comfortable and confident doing this than trying to sing every night.”

“I called Dave and said, ‘Can you come right now?’” Josh Homme told MTV on the rush to hook up, after previous drummer Gene Trautman’s attention started drifting. “It was noon, and he said, ‘I’ll be there at 6.30pm. By 8pm, we had already tracked a few songs.”

“I had joked before that I was pissed off they didn’t ask me to play on Rated R,” Grohl said, referring to the band’s second record. “Their music is really fun to play drums to because I’m used to playing more back in the back 4⁄4 sort of stuff. So this was a lot more interesting.

“Fortunately, I see them differently,” he adds, when asked to articulate the band’s place in rock. “Way above everybody else (laughs). We’re far more interesting and talented than most bands. I can say that because I’m not really in the band (laughs). If I were an actual member, there’d be trouble.”

“These guys have been making music for years and I was a big fan of Kyuss,” he continues. In the early 90s, even then, the music they made was far more satisfying than most everything you hear in the mainstream; they’ve always been somewhat below the radar. They’ve always been making great music but now people are starting to listen and notice. It just takes time for something like that to build and have people actually listen and know that there’s something really satisfying about music that’s interesting or challenging or just different. It’s refreshing to play another instrument for a while. It’s kind of the same feeling.”

Shiflett’s take on the situation mirrors Dave’s assessment. “I think playing with QOTSA definitely influenced his enthusiasm and motivation. I think musically he would have been influenced by them anyway because he’s listened to them since he was a Kyuss fan – he’s always been into that band. I think it’s influenced his desire to just sort of think, ‘Fuck it, let’s just make a record we enjoy and there’s no boundaries and there’s nothing we can’t do for any reason. Let’s make a record we want to play live’. He had a lot of fun doing that, he got to play drums again night after night and, like I said, we were at a point with our record where we all had cabin fever and were totally frustrated. So everybody had to get their motivation back to make it fun and that’s how he got his back.”

Songs For The Deaf is widely considered to be the band’s crowning achievement. It’s worth mentioning that the band’s supergroup status was further bolstered by the addition of the Screaming Trees’ Mark Lanegan. Out on the live trail, the band added Troy Van Leeuwen from A Perfect Circle and Failure – this line-up will likely go down in history as the band’s most daunting line-up.

“The Queens don’t care,” said Dave on the subject of the band’s approach to both the press and the business as a whole. I’m not sure anybody really cares so much about the business. I know that I don’t. I’m just making music and I love to listen to it as well. Another thing about this band is everything musically is taken quite seriously. It’s also a lot of fun and that’s important. It’s important to make sure you’re happy doing what you do, and you’re doing it for the sake of just having fun and sharing experiences like this with other people.”

But ironically, the Queens record with Dave would be a bit of a chore, just like the Foo Fighters album Grohl was temporarily fleeing. Even more oddly, the album finished up the same way – a long period of analysis by paralysis, followed by a burst of raw rock’n’roll energy to wind it up.

“This was the toughest record I’ve ever made,” explained Homme at the time, “because we worked with a guy that we shouldn’t have been working with so we had to get rid of him. It took three months and no record should take that long. But making records for me is the best part of the whole process. That’s when the sounds in your head are realised, you know? So I don’t like anybody in the middle going, ‘Hey! Hey!’ And I’m like, no, get the fuck out of my way. That doesn’t mean for one second that it’s my way or the highway. But we have a thing we’ve been building for years. If you stand in the way of that, it’s like, fuck you. I think Songs For The Deaf is a darker record because Nick and I had a lot of personal stuff going on that wasn’t great. But I hope the stuff sounds hopeful; we’ve always got a little light at the end of the tunnel, even if it’s a flashlight and someone turns it off and goes ‘Ha ha!’”

With the potent collection of rock icons Homme had gathered, it made sense that the album was written for the live stage.

“Absolutely. Before, I’d gotten into trouble, only once or twice, where you’d write something that was too difficult to do live. So this is really written, then played in the studio live, in order to make sure it’s something we cab whip out and do. And what’s cool is that some of it seems like, ‘Woah! How are you going to do that live?’ And then we just come out and do it, and it’s like, ‘Oh, I get it then, I see. That’s how you do it, huh?’

“Mark’s in the band. Three singers. We’re trying to do what’s undone, so far,” adds Homme of the powerhouse he’s assembled. “There’s only a few things that haven’t been done in rock’n’roll. I want to do all of them first. I think multiple singers, and I think getting a drummer who’s been in an iconoclastic band, then switches gears to guitar, then plays drums for nine or 10 months and joins something else, simply because he knows he should – I think that’s pretty classy and undone. And I think a band that’s built… me, Mark, Nick, Dave and Troy, that’s undone too. Because this is the most solid band I’ve ever been in, ever. I mean, Kyuss was well-equipped and ready to go, but this band is so tight right now, it reminds me of that. It reminds me of Kyuss, when Kyuss was on fire. If we played a festival, we didn’t care who played before or after us. Right now, I feel like, ‘Come on, who wants some? Anybody.”

Grohl’s time with Queens Of The Stone Age will always be seen as catalytic. His name, his fame and his enthusiasm for both the band and drumming pushed the Queens to a level they never would have thought possible – for example, a perplexed and quixotic Josh witnessing the band’s album Lullabies To Paralyse reaching number one in the US charts…

This feature originally appeared in Metal Hammer Presents: Foo Fighters – Inside The Ultimate Rock’N’Roll Band in 2005.