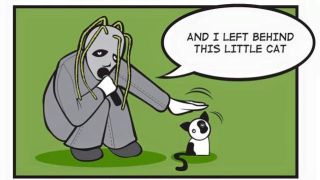 Classic Rock recently ran a piece asking, who are the biggest band in rock right now? There used to be an easy way of working it out. Who sold the most records? Who had the biggest tours? Who travelled to gigs in a jet rather than a battered van? Now, it’s all about sales, streams and followers. One other way of telling a band’s popularity is the amount of memes floating around the internet. Slipknot are one such band to inspire a wave of sarcastic images. Here then, are the best 11 on the internet at this exact moment in time.

We’re not totally sure of this photograph’s authenticity because there are five members missing. Once you realise one of them is wearing an apron, it sets all sorts of alarm bells ringing. We think it’s a fake.

Ever since Slipknot recorded this damning verdict on the human race on 2001’s Iowa album, scientists have been hard at work trying to prove their hypothesis. Look at this boffin below. He’s only gone and cracked it. Well done, sir.

As you’ll notice, the band’s 2004 single Duality proved to be ripe for all kinds of memes, mostly to do with the song’s crooned opening line. This illustration could have added the lyric, ‘it’s the only thing that slowly stops the bake’. Or you could end on ‘cake’. Or ‘rake’, just to mix things up.

Some enterprising young soul has imagined what it would be like to wear Corey Taylor’s mask, and, with a bit of Photoshop wizardry, has mined what could be classed as pure internet gold. Yet on closer inspection, it looks like the Slipknot crowd have been embroidered to some degree. Nice try, buster.

Another bite at the Duality cherry, this time featuring actor Jonathan Goldsmith, who appeared as The Most Interesting Man in the World in an ad campaign for Dos Equis beer. You can’t fart on the internet without this guy showing his meme face.

A young child’s snotty nose is way more disgusting than anything the Clown does on stage. Even that business with keeping a rotting crow in a jar. But still, top marks for the pun. That kid’s sleeves must have been a mess that afternoon.

We’re not sure how the original Cybermen were supposed to be scary. This one just looks like a drunk C3-PO pretending to be a moped. But, between the two, Corey’s look is far creepier. We’re right? Oh, you.

Makes sense. Why would he mention a cat in Duality? It’s about putting his hands into baked goods.

Another Duality one. 18th century French artist Joseph Ducreux’s cheeky self-portrait Portrait de l’artiste sous les traits d’un moqueur has been rinsed for all sorts of lyrical memes. Basically, people take modern lyrics and make them olde worlde. Maybe they spelled ‘relief’ differently in the past. That’ll be it.

LOL Guy is said to have made their online debut in the summer of 2010 on the 4chan boards. Maybe it was the inspiration behind Sid Wilson’s mask, pictured below. Maybe it wasn’t. Who knows how they design those things.

We’re not so sure. We think they’re pretty well matched, to be honest. Hang on…