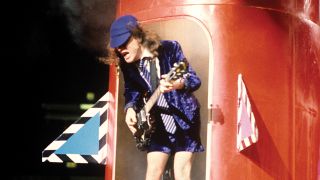 It wasn’t easy for a 70s era rock crew to remain vital and relevant in the plastic-fantastic Neverland of the mid-80s. It was even tougher for the sawn-off working men in AC/DC who were settling into crinkly faced middle age in sweat-soaked blue jeans and black T-shirts when the rest of the world had gone full glam.

There was a chance, infinitesimal as it might’ve been, that AC/DC wouldn’t have even survived the hairspray wars; that they would ultimately be dismissed and discarded, as newer, prettier rock’n’roll gods like Sebastian Bach or Brett Michaels were ordained. They were certainly outnumbered and outgunned.

So it was serendipitous indeed when, some time in 1986, America’s most prominent and oddly regular-Joe-ish horror author, Stephen King, came knockin’ on AC/DC’s door. He was directing his first (and only, it turns out) movie, a haunted truck (!) tale called Maximum Overdrive, and he needed a soundtrack that, basically, sounded like the title. And AC/DC was his favourite band. And they were hoping to ride the rest of the glam era out under the radar anyway. So things worked out.

Maximum Overdrive was no masterpiece, but it revitalised AC/DC’s career. Who Made Who is a soundtrack to a dumb horror movie, but it’s also a compilation of classic AC/DC jams, prefect for turning on a whole new breed of teenage heroes and zeroes to their simple riffy pleasures. It is difficult to rate it as anything other than a truncated greatest hits album, since it contains crucial numbers from Back In Black (Hells Bells, Shook…), For Those About to Rock (title track), Dirty Deeds (Ride On – okay, weird choice, but still), and, erm, Fly On The Wall. It does contain a smattering of non-vault numbers, however, including the screeching, storming title track and a few instrumental passages. Who Made Who – the song – worked on many levels. On the surface it’s a just a classic AC/DC riff’n’roller, effortlessly tough and swaggering. But the lyrics reflect not only the man-versus-machine plot of the movie, but also the band’s stature in rock’n’roll at that particular juncture in time.

The song was a fairly big and surprising hit for the fellas. And once it clicked in folks’ heads that the soundtrack was also an AC/DC hits compilation it flew off the shelves and ultimately went platinum – five times over. And it did so despite the hilariously inorganic drum sounds that somehow got wrangled out of long-running hired gun Simon Wright for the title song. Seriously, it sounds like something whipped up by the Sisters Of Mercy’s drum machine. And the instrumental tracks, written by the brothers Young while bobbing around in the pristine waters of the Bahamas, are nothing special. But who cares? It’s just a bunch of solid AC/DC jams backing up some movie about a killer truck with the Green Goblin glued to its grill. Nobody died because of Who Made Who, man. Except for the dude in Maximum Overdrive who got his brains blown out by a killer soda machine. Spoiler alert.

Two years after the – let’s face it – easy triumph of Who Made Who, it was time for our favourite Aussies to put up or shut-up and get a new album of originals out. For Those About to Rock was almost a decade away at this point, and no one considered Flick Of The Switch or Fly On The Wall to be anywhere near that level of quality. Malcolm was struggling with his alcohol issues at this point. Glam was about to fall off a cliff but nobody knew that in ’88, and AC/DC had really had it with all the posing and preening.

And that’s how we got to Blow Up Your Video, with booze and unrest and the all-consuming electric eye of MTV. Harry Vanda and George Young, the men who essentially orchestrated the AC/DC sound, were back on board to produce, and the band were primed to claw their way back to the top of the hard rock heap.

Long story short, that’s exactly what happened. Short story long, the comeback was based largely on just two or three songs. Short story shorter, if you jumped from 1981 to 1990’s The Razors Edge, you wouldn’t miss much. Although you would miss Heatseeker, and that would be a shame. Along with second-single That’s The Way I Wanna Rock N’ Roll, Heatseeker was the album’s runaway hit, a deceptively subtle ode to the band’s 50s-era Chuck Berry duck-walking roots that does not clobber you over the head like the majority of AC/DC mega-jams do, but rather hits a thrumming, low-key groove and sticks with it. Similarly, That’s The Way I Wanna Rock’n’Roll takes a hard left from clanging, metal-dominated 80s and essentially imagines a hard-rock Elvis. It was a canny move indeed to remind the long-haired hoi-polloi about where the band came from, especially during a time when AC/DC looked and sounded nothing like their Sunset-stripping contemporaries. Their long journey back to cultural relevance had already turned a corner
– The Cult had recently turned into a hip-kid AC/DC, with many more Angus-ites plugging away in garages far and wide – but Blow Up Your Video’s twin singles hastened the process significantly. The message was clear: trends come and go, but AC/DC were forever. To paraphrase the great and noble psychedelic sage Roky Erickson, AC/DC had always been here before.

And while all that’s great, Blow Up Your Video is still not a great AC/DC album. Apart from those two songs it’s largely a slog through fairly pedestrian deep cuts. And that’s really the major difference between great AC/DC albums (High Voltage, Highway To Hell, Back In Black), and not-so great ones (Flick Of The Switch, Fly On The Wall, this one): the good ones are all killer, no filler, every song a finely crafted morsel of hard-core rock’n’roll so tight and lethal it can’t even be reasoned with, stacked two-sides high. Back in their salad days, AC/DC were working-class heroes who knew how much sweat went into every buck, and that’s why the early albums were so dense with good stuff. You earned it, and they took pride in a job well done. Nobody ever bought Powerage and felt cheated. You might feel a little slighted banging through go-nowhere boogie-dirges like Ruff Stuff, Go Zone or Nick of Time, however.

As a whetting of the appetite for the return-to-form The Razors Edge, Blow Up Your Video is a decent reminder that on a good night AC/DC are the best band in the world ever always, Amen. But if they had to live or die on the strength of individual albums, there’d be a fair amount of wheezing in the AC/DC camp by the end of ’88. Stay for the singles and then get the fuck outta here, man.