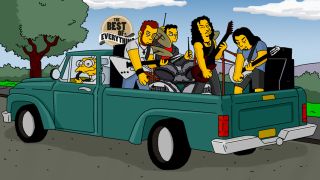 Music plays a big part in The Simpsons – from Danny Elfman’s theme tune to Bleeding Gums Murphy to The Be-Sharps – so it’s no wonder that some of the biggest and best bands on the planet want to be immortalised in yellow. Here are the 13 best Springfield appearances from the bands you love…

After Gabbo (GABBO! GABBO!) almost ruins Krusty’s career, Springfield’s favourite clown stages his comeback special with the help of Hugh Hefner, Bette Midler, his “worthless half-brother” Luke Perry and the Red Hot Chili Peppers. The band even PG’d their lyrics after Krusty suggested swapping “What I got, you gotta get, and put it in you” to “What I’d like is I’d like to hug and kiss you.” Better than playing Moe’s to just Barney which was on the cards already.

As a teen, Marge was a huge fan of The Beatles and sent her painting of Ringo to the man himself. Years later, while answering all his fanmail, future train voiceover artist stumbles across his painting and loves it! His response to Marge spurs her into joining the local art class and eventually painting Mr Burns in the nude – making fun of his genetalia in the process. Fun fact: Three of the four Beatles have appeared in The Simpsons – Paul on Apu’s vegetarian roof garden and George drives past The Be-Sharps’ gig on Moe’s roof declaring “It’s been done.”

Bart decides he wants to be a rockstar and purchases his first guitar after seeing Spinal Tap and their “half-inflated dark lord”. Although due to water on the stage the band finished the set early and declared to “Springton” there would be no encores. And as every Simpson fan worth their salt knows, Harry Shearer not only voices the likes of Mr Burns, Ned Flanders and Dr Hibbert but he also plays Derek Smalls in This Is Spinal Tap. The talented bastard.

When Homer discovers his belly is strong enough to stop a cannon ball at close range, he immediately joins the travelling freak show with Lollapalooza (before being sent to the vet after health concerns). While on tour he befriends Sonic Youth, Peter Frampton, Cypress Hill and The Smashing Pumpkins (Homer Simpson, smiling politely). Respect should also be paid to the classical remix of Insane In The Membrane after Cypress Hill hire an orchestra “possibly while high”.

For Mr Burns’ birthday celebrations, the Ramones are hired to wish him a happy birthday in typical punk style. As it’s the Ramones, their cameo is short and sweet after starting with an “Up yours, Springfield!”. Of course, Burns isn’t a fan and orders Smithers to have The Rolling Stones killed.

While at the local chilli cook-off, Homer eats several “Merciless Peppers of Quetzlzacatenango” after coating his mouth with candle wax to stop the painfully hot spices. This, of course, causes Homer to start halluncinating and ends up meeting the Space Coyote – voiced by Johnny Cash – who urges him to find his soulmate. Which turns out not to be EARL (the machine in the lighthouse) but his wife Marge.

Johnny Cash as the Space Coyote and right, Metallica hitch a ride from Hans Moleman

METALLICA (Season 18, The Mook, The Chef, The Wife And Her Homer)

Having broken down at the side of the road, Metallica’s biggest fan Otto arrives to save the day and in turn finds out his declaration of love saved Kirk Hammett from leaving the band back in 1997 when they played the Springfield arena. Oh, and we find out Hans Moleman slept with Lars’ nan – presumably before he took a football to the groin for a living.

When Homer and Marge go through (even more) relationship problems, Homer moves in with two guys, Grady and Julio. Wanting their parents to get back together, Bart and Lisa enlist Weird Al Yankovic to sing a song titled Homer And Marge – a parody of John Mellencamp’s Jack & Diane. He also sings his own end credits theme.

THE WHO (Season 12, A Tale Of Two Springfields)

We say The Who, but Pete Townshend didn’t lend his voice to the show, in fact it was his brother Paul Townshend – and production staff decided to include Keith Moon on drums (because why wouldn’t you?). The band use the monumetnal power of Won’t Get Fooled Again to bring down the wall erected that splits the town in half following a disagreement about area codes leading to New and Olde Springfield.

Springfield has many past-times, but perhaps the most popular is Whacking Day when residents come together to smash the skulls of wild snakes in the name of sport. Hooray! Barry White however isn’t a fan of serpent cruelty (and loves the “sexy slither of a lady snake”) so lures all the wriggly bellied creatures to the Simpsons’ house with the bass from Can’t Get Enough Of Your Love, Babe. Isn’t he nice?

In an interesting twist, when Homer meets Leon Kompowsky in a mental health hospital (a man who believes he’s Michael Jackson), his voice comes from the King Of Pop himself! Although he was credited with the name John Jay Smith. The idea for the episode actually came from Jacko and wrote the song Happy Birthday Lisa for the show as he was such a fan.