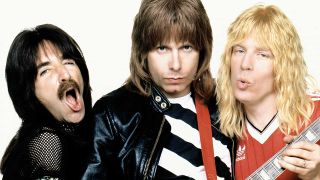 "I went to see Spinal Tap and I didn’t think it was funny," Ozzy Osbourne once said. "I thought it was a fucking documentary, I did!"

He wasn't the only one. Since their first appearance on ABC's The T.V. Show in 1979, Spinal Tap blurred the line between reality and unreality like no satire before or since, and their 1984 movie This Is Spinal Tap isn't just one of the finest examples of the art of mockumentary, it's one of the greatest films ever made.

It's a success because it resonated with anyone who's ever toured – Lars Ulrich, George Lynch, Robert Plant, Brad Whitford, Dave Grohl and more have all confirmed the film's accuracy – and with fans, who just recognise brilliance when they see it.

These are This Is Spinal Tap's 10 greatest scenes.

Sir Denis Eton-Hogg: “We here at Polymer wish Spinal Tap great success on their North American tour. And so say all of us! Tap into America!”

Lesser directors would simply have stuffed armadillos down the front of their protagonists’ catsuits, before sitting back and waiting for the belly laughs. Rob Reiner did that too, of course, but it’s his more subtle observations of the music industry’s machinations that give Spinal Tap its longevity.

As the band prepare to tour US in support of their album Smell The Glove, Reiner’s mockumentary places us on the wall of a record company party, where movers and shakers clink glasses and stab backs.

As ever, the performances are utterly convincing (Fran Drescher is superb as Artist Relations Officer Bobbi Flekman), but ultimately it’s Reiner’s dead-on observations of the record industry food chain that gives the scene its squirm factor, as the band, acutely aware of which side their bread is buttered, forego their customary sarcasm to pump the hand of Polymer President, Sir Denis Eton-Hogg.

Nigel Tufnel (ominously): “Ian, can I have a word with you for a minute?”

Ian Faith: “Yes, of course.” Tufnel: “There are a couple of problems with the backstage arrangements.”

Tufnel: “Well, there are some problems here. I don’t know where to start.”

Tufnel: (trying to fit piece of cooked meat onto small slice of bread): “No. Look – this miniature bread. I’ve been working with this now for about half an hour…”

The backstage rider piss-take has never been done better. Ironically, when Spinal Tap later toured ‘for real’, Christopher Guest (aka Nigel Tufnel) was similarly underwhelmed with their rider. “We suffered many of the same ignominies,” he recalls. “At one gig there was half a sandwich and a pitcher of water.”

The band get lost backstage

It’s showtime at Cleveland’s Xanadu Star Theatre, and Spinal Tap begin the long walk through the backstage area to get to the stage. When they arrive back at the carpenter who had moments earlier given them directions, and realise they had gone in a circle, enthusiasm turns to bewilderment.

The inspiration for the scene comes from a 1965 rockumentary about Bob Dylan (which shows him struggling to find his way out of a venue in Manchester), and Tom Petty.

“We saw a tape of Tom Petty playing in Germany,” Guest has said, “where he’s walking backstage… and he ends up on an indoor tennis court, and there’s just this moment of stunned, you know, ‘where am I?’”

Interviewer Marty DiBergi: “And most amps go up to 10?”

DiBergi: “Does that mean it’s louder? Is it any louder?”

Tufnel is talking to DiBergi (Reiner) about his axe collection. “Marshall made a special plate for me that went up to 11,” he explains. “Subsequently, the new amp that they made for me goes up to infinity on the dial. They made a real amp that goes up to 20. That’s the one that people can buy now for real. But mine goes up to infinity.”

Ian Faith (gestures to his ever-present cricket bat): “I carry this partly out of a sort of… affectation. It’s a kind of totemistic thing. But to be frank with you, it’s come in quite useful in a couple of situations. Certainly, in the topsy-turvy world of heavy rock, having a good, solid piece of wood in your hand is quite useful.”

By the time the movie was released, the band’s heavy-handed manager Ian Faith (Tony Hendra) was an all-too-real character in the real rock world. At first, we assume that the point of Faith is that he inverts these expectations, as a nerd who allows the band to walk all over him.

As the film progresses, however, there’s a palpable undercurrent of malevolence. The psychosis is best demonstrated by the scene where he explains how his bat has “come in quite useful”, before the film cuts to footage of him using it to smash a TV, destroy a table and threaten a promoter.

Nigel Tufnel (examining the sleeve of their new album): “There’s something about this that’s so black, it’s like, how much more black could this be? And the answer is, none. None more black.”

David St. Hubbins: “This is something you wear round your arm. You don’t put this on your fucking turntable!”

As the film opens, the cover of Smell The Glove is set to show a woman on all fours, wearing a dog collar and having a black glove pushed into her face (the inspiration: Whitesnake’s Lovehunter). However, when the album arrives, the record label have watered down the concept to the point where it’s “none more black”.

Using a typical Rob Reiner device of taking actual events and exaggerating them, Smell The Glove’s entirely black cover was almost certainly a nod to AC/DC’s Back In Black, released three years prior to the film.

Nigel Tufnel (in doom-laden voice): “In ancient times, hundreds of years before the dawn of history, lived an ancient race of people – the druids. Nobody knows who they were, or, what they were doin’. But their legacy remains, hewn into the living rock of Stonehenge.”

From AC/DC’s Rosie to Motorhead’s bomber, the overblown stage prop has long been a metal mainstay. The Stonehenge scene in Spinal Tap turns this concept on its head, when a careless set of measurements for the band’s new stage set written down by Nigel Tufnel results in the band playing alongside a stone ‘monument’ that stands just 18 inches high (a failing accentuated by the dwarves who dance around it).

Like most of director Rob Reiner’s ideas, the scene appears to be a clever subversion of real events; in this case, Black Sabbath’s Born Again tour, when the band unveiled a life-size model of Stonehenge and a satanic midget wearing a red leotard.

The only sticking point is that Spinal Tap and Born Again were released so close to each other, leading some to suggest that the Stonehenge connection might actually have been simply a coincidence.

Jeanine: “You don't do heavy metal in Dubly.”

One of the most consistent cliches in rock’n’roll is that behind every band is an ego-crazed girlfriend driving a wedge between the songwriters. The arrival of David St. Hubbins’s girlfriend, Jeanine (June Chadwick), at Shank Hall reflects this, to the point where Tap cast members dubbed it ‘the Yoko plot’.

Jeanine starts off as a mere irritation , but ultimately her controlling presence drives out both Tufnel and Faith. The Yoko/Lennon relationship is the key reference, although Johnny Rotten also recalled in his autobiography that the romance between Sid Vicious and Nancy Spungen “resembled something out of that rock’n’roll satire movie, Spinal Tap”.

Marty DiBergi: “Do you feel that, in collaboration with David, you are afforded the opportunity to express yourself musically, the way you would like to?”

Nigel Tufnel: “Well I think I do – in my solos. My solos are my trademark.”

Christopher Guest played Nigel Tufnel as the embodiment of all the most repellent qualities of a lead guitarist. The character is mainly an amalgamation of the axe heroes of the day, but this scene made specific reference to Jimmy Page of Led Zeppelin.

While soloing, Tufnel reaches for a violin and scrapes its strings over the strings of his guitar. He frowns at the atonal racket the combination produces, adjusts a tuning peg on the violin, and continues (it still sounds appalling).

Funny in its own right, the scene takes on a new dimension when viewed alongside a Led Zeppelin performance of Dazed And Confused, which saw Page using a violin bow to play his Les Paul.

David St. Hubbins (singing): ‘When there was darkness and the void was king and ruled the elements. When there was silence and the hush was almost deafening. Out of the emptiness, salvation, rhythm and light and sound. ’Twas the rock and roll creation. ’Twas a terrible big bang. ’Twas the ultimate mutation. Ying was searching for his yang.’

Reiner turned this scene into parody via Derek Smalls, whose pod fails to open. This moment was referenced by U2 during their 1997 Popmart tour, when the group emerged from a giant lemon.

“We felt that the more smoke there was the better,” says Popmart designer Willie Williams. “Just then, Las Vegas had the stillest wind ever. The Edge has to start his guitar by kicking a switch. He ended up on his hands and knees, feeling around for it. Later, he said to me: ‘There I was at the opening night, and this voice came into my head: ‘I’m Derek Smalls.’”