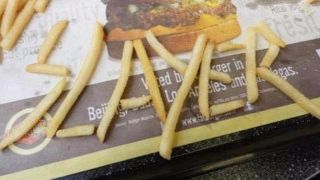 On paper, the concept of ‘having a laugh’ and Slayer should go together like rotten milk and gravel. After all, their stock-in-trade deals almost exclusively in death, war and the darker realms of human behaviour. But somehow, there’s humour to be found in the darkness.

Where else would you find thrash-themed jokes about former Popes, pizza and the President of the United States Of America? Here’s 12 of the very best…

This photo went viral many years ago, perfectly capturing the vague link between Saved By The Bell and Slayer. One internet comment reads: “My buddy has this tatted on his thigh”. That’s commitment to either Slayer or the actor Mario Lopez. Or both. Life doesn’t make sense.

Slayer are a bad influence on the kids. For example, Kerry King can’t walk past a child without them transforming into a bald-headed, tattooed thrash guitarist with an avid interest in herpetology. We’re surprised this hasn’t been mentioned on the news. This meme is the closest we’ll ever get. Pray for Ricky.

We’re pretty certain the bagpipes have been Photoshopped into this picture of Kerry King. We’d remember that unmistakable wheezing sound over the top of War Ensemble. The leather chaps, however, appear genuine.

Every time we hear the title track from the band’s 1988 album South Of Heaven, we can’t help but think of a tray of hot chips.

This was the perfect Slayer meme, until the creator got the lyrics to Dead Skin Mask wrong. Maybe that’s why Tom Araya looks disappointed.

Weather reports often leave us feeling despondent at the best of times. If Tom Araya was to rock up and predict a 30% chance of crimson precipitation, we wouldn’t be that bothered.

So it’s true, Barack Obama is a fan of Slayer. Look, there’s irrefutable proof below. Favourite song? Seasons In The Abyss.

The ‘Disaster Girl’ meme originated in Mebane, North Carolina almost 10 years ago. Here she is dishing out a one-liner about those with poor taste in music. The fire? Why, that’s just a coincidence. OK?

So you wanted to make a Satanic pizza. Well played. But what you’ve actually done is made six of the slices crust-free and awkward to eat. Thanks for that.

Well, that’s the rental deposit gone. Nice one. Shall we play God Hates Us All again?

This is your challenge for the week. End every story you tell with this. People won’t have a clue what’s just happened. Unless the story was about answering a question in the quiz below.