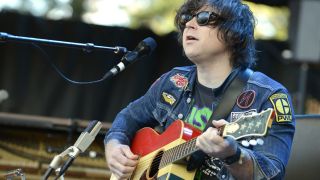 At this weekend’s Newport Folk Festival, alt-country superstar Ryan Adam did one of the things he does best, turning classic songs on their head and making them completely his own.

Adams, who has previously covered entire albums-worth of material from the likes of Oasis and Taylor Swift, took the stage accompanied by the newgrasss jam quintet Infamous Stringdusters and singer Nicki Bluhm and began his set with a hillbilly race through Slayer’s classic South Of Heaven. Later in the set they perform an equally uproarious version of Black Sabbath’s 1970 track The Wizard.

The performance ended with Adams saying, “the next time I come back, I’m gonna do a rap set”.