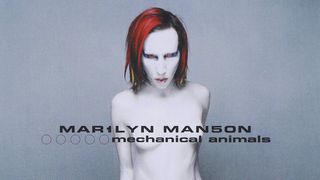 Joseph Cultice knew the God Of Fuck better than most.

“I’d already done the majority of Manson’s photos,” the New York photographer recalls, “so I was always in the running to do Mechanical Animals. But at that time, the band were on such a high they were even going to big photographers like Nick Knight, who were way out of their price range.”

In the end, Manson gave his old colleague the nod, and even invited Cultice to stay at his Los Angeles mansion while they collaborated on the sleeve.

“It was just easier than keeping me in a hotel,” he explains. “A lot of crazy shit went down at that house. They were the new rock stars in LA, so every celebrity wanted to hang out and drink with them.”

Cultice knew what he wanted for the sleeve, and realised he would need help to execute it.

“The androgynous body was created by a Japanese special effects artist called Screaming Mad George,” he remembers. “He cast Manson’s chest and we had tits designed by a sculptor. Then the tits were put on Manson’s chest and his entire body was covered in a kind of rubbery latex. He had to put it on four time, and each time it took eight hours. At the end of the day, you’d have to peel it off in big pieces.”

“When we did the retouching,” he laughs,” to make Manson’s hips have the right shape, we used a shot of [supermodel] Elle MacPherson. We had the hardest time shaping his hips in Photoshop to make it look like a girl’s hips – y’know, we had to get rid of his cock and everything. At the retouching place, there was a photograph of Elle MacPherson in a bikini, so we laid that on top as a kind of template to shape his crotch.”

The Mechanical Animals sleeve caused a storm when the album was released in 1998, with the American Wal-Mart chain store refusing to stock it in its original format, and the Japanese market objecting to the six fingers on Manson’s left hand.

Inevitably, Manson himself was delighted with the artwork.

“He was crazy about it,” Cultice recalls. “One of my favourite nights is when we sat in Times Square in a truck, watching out the window as they put up the billboard. People didn’t even realise it was Manson watching in the car.”