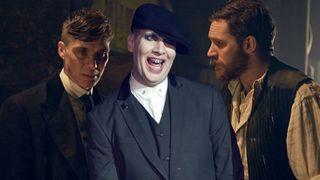 After seeing photos of Marilyn Manson sporting a ‘newsboy’ style flat cap, collar stud and three-piece suit at a recent awards ceremony, one thought sprang to mind: someone’s been watching a lot of Peaky Blinders.

Maybe he’s subconsciously trying to get a part in Steven Knight’s show about Birmingham’s most notorious crime family. And why not? He made his acting debut in Lost Highway, he was Ron Tully in Sons Of Anarchy, served drinks on rollerskates in Eastbound & Down and most recently played the creepy Thomas Dinley in Salem.

With all that acting experience under his belt, there’s no reason on earth why he can’t be a member of the volatile Shelby family. Check out the entirely Photoshopped gallery below to see how he’d fit right in as Thomas Shelby’s obnoxious brother.

But how would he be introduced into the next series’ storyline? The best suggestion will win a bag of admiration and a high five in the post…