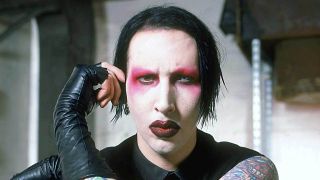 It’s no secret that Marilyn Manson (aka Brian Warner) took his stage name from two celebrities of varying levels of fame – Marilyn Monroe and Charles Manson. One was a beautiful model and actress who committed suicide, the other is a man incarcerated for conspiracy to murder.

And now a letter has appeared from the latter half of Brian’s namesake. Discovered by a Charles Manson fansite back in 2012, the handwritten letter was sent to Marilyn Manson doesn’t appear to make a lot of sense but gives an insight into the psyche of a man who has been behind bars for the vast majority of his life.

Can’t read that? Here’s the transcript:

It’s taken me a long time to get there from where I could touch M. Manson. Now I got a card to play – you may look into my non-profit, ATWA, and give Manson what you think he’s got coming for Air, Trees, Water, and you. Or I will pay Manson what you think Manson got coming – the music has make Manson into Abraxas Devil, and I’m SURE you would want some of what I got from what I got. It’s a far out balance. Beyond good and bad, right, wrong. What you don’t do is what I will do – what you did a sing-along, and let it roll and said how you saved me a lot of steps – I don’t need, it’s not a need or a want. Couped – coup. Ghost dancers slay together and you’re just in my grave Sunstroker Corona-coronas-coronae – you seen me from under with it all standing on me. That’s 2 dump trucks – doing the same as CMF 000007

To our knowledge, Marilyn is yet to respond.

Blood On Our Hands: Backstage With Marilyn Manson, Public Enemy No.1