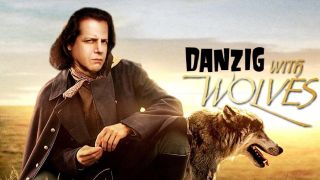 The Misfits frontman Glenn Danzig has always been a target of some light-hearted piss-taking, especially from the UK press. He was once nicknamed Fonzig and the label sort of stuck. That’s not to say that he’s not without a sense of humour; he played a beach-loving goth in the US comedy series Portlandia and voiced his grumpy likeness in the cartoon Aqua Teen Hunger Force.

But when it comes to memes, the Internet has outdone itself. Look at these gems…

Dancing With The Stars is basically the US version of Strictly Come Dancing. Neither audience will ever get to enjoy the sight of the Misfits man do the hustle or even an impassioned Argentine tango. He’s too busy crooning about teenagers from Mars or astro zombies at the moment.

Aw, he’s wearing a tiny tuxedo. If you squint, Danzig looks a bit like Tattoo from Fantasy Island. As far as we know, the late Hervé Villechaize never fronted the Misfits.

“We swim the seas at night, we go where clownfish dare…”

Even rock stars have to buy cat litter while wearing one of their own band t-shirts. The Internet wasn’t so forgiving though.

Before the Misfits, Danzig was just plain ol’ Glenn Anzalone from New Jersey: ‘You can dance, you can jive, having the time of your life…’ You’re imagining what he’d look like mid-jive now, aren’t you? Majestic is the word.

Just relax, stare at the grid and let your eyes flit around. After a minute, it becomes impossible to tell Danzig and the Alien star apart. They’re definitely two separate people, but your mind can play tricks. Thanks, mind.

Life would be very different if the Birmingham new wave band were comprised solely of Glenn Danzig. We’d like to hear Hungry Like The Killer Wolf, though.

A couple of forays into Hollywood history now. First up, some genius has imagined what it would be like if Danzig replaced Kevin Costner as the leading man in the overlong 1990 Western Dancing With Wolves. Come to think of it, it’s easy to imagine him wandering around a remote Civil War outpost and shouting at passing wolves.

And finally, nobody puts Danzig in the corner. Apart from that bloke from North Side Kings who gave him a cuffing in 2004.