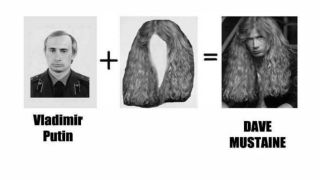 It’s 36 years since Dave Mustaine gave his former band Metallica the biggest “fuck you” of their lives by flouncing off and forming Megadeth after he was sacked. Since then, our hot-headed, flame-haired hero has created some of America’s most beloved metal albums, but that doesn’t mean he’s immune to the gloriously sarcastic art of the meme. Here, then, are some of the very best Megadeth mega-memes…

The title track of Megadeth’s 1986 album Peace Sells… But Who’s Buying? has proved to be a springboard for many Mustaine memes. With a little Google detective work, we’ve learned you can put a price on peas – a 1.6kg bag of garden peas will set you back £2.08.

Here’s a mash-up of sorts, featuring a line from Adele’s 2015 hit single Hello and one from Megadeth’s 1992 track Sweating Bullets. Mix them together and you’ve got yourself a tasty meme. The fact they’re both redheads is a mere coincidence.

Here’s a meme known as ‘Butthurt Dweller’ or Gordo Granudo (source: KnowYourMeme.com). We’re not sure why this chap is setting himself such a lofty challenge, but he could be heading for a fall. But good luck to you, sir.

Here’s Confession Bear getting something off his chest. The little cub’s face is etched with sadness because his favourite album came second last in our recent Megadeth album rankings. The worst, according to Hammer’s Dom Lawson, is Super Collider. As popular as a fart in a car, that one.

Kudos to Jules Winnfield for upholding metal standards when it comes to spelling band names correctly. Even the dictionary gets it wrong. Like, duh. But waving a gun around could be seen as a little excessive. Wait, that’s a scene from Pulp Fiction.

We’re 100% sure that Dave Mustaine’s hair isn’t made out of dry ramen noodles – unlike Chad Kroeger’s locks in the 2001 Nickelback video for How You Remind Me.

American actor Jonathan Goldsmith, who appeared in an ad campaign for Dos Equis beer, has been replaced by Holy Wars-era Vic Rattlehead for this slightly creepy meme. How does Vic yawn with all those hooks in his mouth? That’s something that’s always bugged us.

If you were invited to Dave Mustaine’s house for Sunday lunch, what would you take for dessert? Pizzelles, of course. That’s a brilliant joke.

Another Sweating Bullets-inspired classic. We’re assuming whoever crafted this internet diamond took the rest of the day off and ordered a well-deserved pizza.

The likeness between Putin and Mustaine is uncanny. Try spending an hour staring at both of their scowling chops and you’ll start to wonder why the Russian president is fronting Megadeth. That’d be something.

We’re pretty sure these photos have been doctored by experts, but look how happy Dave appears after getting rid of a stubborn stain. Life is about the small victories.

Photoshopped images of guitarists holding slugs were doing the rounds a couple of years ago. If the idea of Dave Mustaine grasping an oversized mollusc turns your stomach, look away now. It was too late for us. Slugs are the worst, aren’t they?