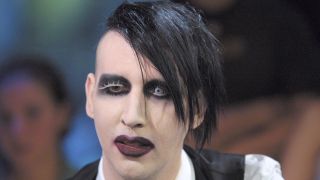 Marilyn Manson is brilliant. From the mid-nineties to the start of the millennium, this industrial metal maverick scored a hat-trick of world-beating, parent-eating records: the year 1996 birthed Antichrist Superstar, 1998 followed with Mechanical Animals then Holy Wood topped things off in 2000. Each a work of genius in their own right; each a scathing, scabby gunshot to the mainstream. But not everything he touches turns to gold. Here are 10 tracks from the God Of Fuck’s grotesque discography that should probably be avoided.

Manson’s full-length debut, Portrait Of An American Family, brims with charm and oddities but has little in the way of fully-fledged, conceptual bliss like the following three. My Monkey is the shining example of Manson, at the time, having ideas slightly above his station; borrowing lyrics from Charles Manson’s Mechanical Man, while the song grinds along with carnivalesque keys. Even Manson’s skin-crawling drawl, the “What I make is what I am, I can’t be forever” line, can’t save this track from appearing juvenile and rushed, especially given the content he’s tackling.

The media had been taken down a peg or 15 on Holy Wood, so there really was no need for Better Of Two Evils. It’s a cobbled-together attack on “paparazzinazis” and, all in all, sounds like KMFDM spitting their dummy out – guitarist Tim Sköld is held responsible here. The Golden Age Of Grotesque is a thrilling, unique record that was a more than adequate successor to Holy Wood, but Better Of Two Evils is the record’s sole weak link – derivative both lyrically and musically, it’s only ever been played live once.

The High End Of Low was the definition of a mixed bag; Devour and Into The Fire built on the candid, heartfelt Manson we’d become acquainted with on Eat Me, Drink Me; We’re From America, Pretty As A ($) and Arma-Goddamn-Motherfuckin’-Geddon are each fat, beefy industrial rock clangers; a few others, as this article delves into, just fail to make an impact. Into The Fire’s gorgeous, piano-laden acoustic throes would have been the perfect farewell, fading The High End Of Low out and leaving a positive impression. But no, 15 rolls along and shits all over that. It’s repetitive without any discernible hook and the track’s minimalistic nature stifles that air of gravitas conjured by Into The Fire. Maybe it could’ve worked in a cut-down format as an interlude or something, but as the full-stop on an already divisive record, 15 does Manson a disservice.

Eat Me, Drink Me isn’t awful. At least half of Manson’s sixth record, released in 2007, is worth re-listening to, admitting you’re wrong and slapping yourself across the forehead. Are You The Rabbit?, however, is not one of these tracks. There’s a largely useless Sköld solo – he does better work across this record though, honest – and the entire song lurches forth with a sluggish, sedated feel. It yearns to be the bluesy bastard son of Kinderfield and Cruci-Fiction In Space, but the end product fails to procure the grinding, Hellish stomp of the aforementioned classics.

The lazy lyricism isn’t restricted to the title: “Murdercute happyrape” is a phrase that pops up in this ridiculous number, coupling with “There’s not a word for what I want to do to you” to create a disturbing atmosphere. The throwaway refrain and sludgy, blues-tinged instrumentation give the lyrics a nasty edge which fail to be accompanied by any sort of redeeming message. Manson must have seen some potential in the happy-go-lucky clap-along part, mind, seeing as it translated much more naturally to The Devil Beneath My Feet from The Pale Emperor.

Another case of Manson failing to ignite the spark here. Disengaged has that swinging, blues rock feel to the riffs, albeit a little spikier than they’d become on The Pale Emperor. Ultimately, though, the hard/soft mish-mash had yet to be perfected, with Manson’s roar of “Dis! Dis! Disengaged!” and its surrounding adlib sections suggesting that there wasn’t much goth gas in the tank. This obviously wasn’t the case, as The Pale Emperor proved, but most of Born Villain proved a little directionless. However, the track following Disengaged, Lay Down Your Goddamn Arms, is fab.

The throbbing, gristly bass of Twiggy had been dearly missed for several years, so having him bash out the same few notes for nine minutes in some sort of hypnotic murder trance should have been the epitome of excellence. Unfortunately, I Want To Kill You In The Movies’ broader musical canvas isn’t enough, essentially revealing itself as a copy of a copy of a copy of something else we’d already heard on the record. Manson’s “Cut, cut, cut” refrain lacks conviction and, again, the basic repetition present in this track is neither catchy nor atmospheric enough to warrant its length.

3. Mutilation Is The Most Sincere Form Of Flattery (2007)

“I’m embarrassed to be me because these people are doing a really sad, pitiful, shallow version of what I’ve done.” That’s Manson talking about the lyrical inspiration for Mutilation Is The Most Sincere Form Of Flattery, but he’d may as well have been banging on about the song itself. “Fuck you, fuck you, fuck you too” isn’t exactly Irresponsible Hate Anthem, nor is the song in question even a patch on Eat Me, Drink Me’s high points; Mutilation Is The Most Sincere Form Of Flattery is awkwardly phrased, flat and in possession of yet another useless Sköld solo. Compare this song to Eat Me, Drink Me’s opener, If I Was Your Vampire or the record’s underrated classic, Evidence. There you go.

Carly Simon’s 1972 hit has been covered to death. Everyone from The Feeling to Faster Pussycat to Queens Of The Stone Age have given it a pop – even Manson’s chum Trent Reznor can’t deny You’re So Vain’s power, referencing the song’s refrain during Nine Inch Nails’ Starfuckers, Inc. So Manson had to pull a Sweet Dreams (Are Made Of This) here and, well, he didn’t. Pal Johnny Depp has a go on guitar as the rudimentary, bass-laden racket of Born Villain’s closing gambit completely underwhelms the listener; if you’re gonna do a cover like this – a fun cover – at least fully commit, a la Revolting Cocks playing Do Ya Think I’m Sexy?. Here, Manson fails to make an impression on another artist’s work, maybe for the first time in his career – even Tainted Love was half-decent.

So here we are. The end. Unfortunately. As promising as some of The High End Of Low’s tracks were, following I Want To Kill You Like They Do In The Movies with WOW is a move that still stings to this day. It’s bloated; it’s like Nine Inch Nails’ Closer repeating fourth grade; it’s self-indulgent, annoying, grating music that really drags the album down. The spoken word just isn’t convincing, coming across as arrogant and completely breaking down the naked, fragile portrait of Manson we’d envisaged on Devour at the record’s birth. If we had a second-hand DeLorean and a spare flux capacitor, we’d drive straight back to 2009 and beg Manson to reconsider.