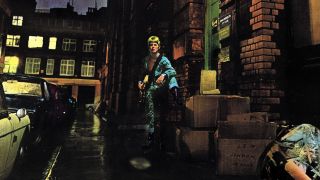 Ziggy Stardust is David Bowie’s crowning achievement. Obviously, contrarians will insist other albums have proven to carry greater cultural weight or defined his artistic legacy better, but revisit Ziggy today and its visceral and emotional impact remains undeniable. Especially when played, as advised, ‘at maximum volume’.

Latterly, Ziggy’s attendant baggage has come to overshadow its musical significance. Arriving just five months after Bowie proclaimed his bisexuality, and promoted with a series of artfully camp TV appearances in support of lead single Starman, Ziggy reflected and shaped its time and its audience like no other album. Ultimately, the line between Bowie the artist and the licentious Ziggy role he came to inhabit and eventually mirror, blurred to psychologically toxic effect and Bowie, as ever, moved on.

Worst track? Perhaps in Ziggy’s case, ‘least best’ is a more pertinent description. Written by Ron Davies and already familiar as the title track of a 1970 Three Dog Night album, It Ain’t Easy fit perfectly into Ziggy’s conceptual narrative and boasts a dynamite hook but, well, it’s a cover…

With an original title, when first demoed, of He Was Alright (Song For Marc), Lady Stardust’s gender-blurring lyric alludes to a brief flirtatious affair between Bowie and, his soon-to-be-rival, Marc Bolan: ‘A love I could not obey’. Rewritten to highlight Ziggy’s pan-sexuality, it opened side two. Ronson’s piano flourishes almost steal the show, but Bowie’s mannered vocal is only entrancing.

8. Hang On To Yourself

Propelled by a driving Eddie Cochran-informed, Ramones-presaging Trevor Bolder bass line, Hang On To Yourself was another song Bowie had been flogging and honing previous to Ziggy; it graced the B-side of his Arnold Corns side project’s Moonage Daydream single the previous May. Inspired into being by the Velvet Underground’s Loaded, Ziggy’s version wouldn’t have sounded at all out of place on Bowie and Ronson next production project, Lou Reed’s Transformer.

Forget Lazarus, Bowie has never sounded quite so ‘musical theatre’ as he does on Star. Though ideal as an illustrative vignette to move the Ziggy narrative forward (as our interstellar hero daydreams of rock stardom as the ultimate means by which to disseminate his message of youth empowerment, to be latterly revealed in Starman), Star too had been knocking around in Bowie’s back brain for some time, he’d even tried selling it to other artistes to distance himself from its (clearly autobiographical) narcissism. Though presented as Ziggy Stardust’s daydream of fame its lyric revealed its composer’s ultimate goal for Bowie life to imitate Ziggy art.

Another hangover from Arnold Corns, Ziggy’s third track, and its first opportunity for Mick Ronson to truly rock out, Moonage Daydream was significantly rewritten to introduce and flesh out Ziggy’s titular ‘space invader’. Seductively encoded with sci-fi word-play and gay slang, this gender-blurred androgynous ‘mama-papa’ moved on from sexually confused ‘rock ‘n’ rolling bitch’ to happily filling a pew at ‘the church of man-love’. As things rapidly escalate from inspired to ecstatic, Ronson unleashes an überglamtastic concluding guitar solo to die for.

Turned down by Mott The Hoople (they took All The Young Dudes instead), Suffragette City is Ziggy’s most unreconstructed rocker. A little bit Jerry Lee, a little bit Stones, it can easily be interpreted as an insight into how Ziggy Stardust And The Spiders From Mars actually sounded as a band. Climaxing in a deliciously salacious ‘Wham Bam Thank You Ma’am’-punctuated false ending, Suffragette City is glam rock in excelsis.

Ziggy’s anthemic signature tune tells a cautionary tale. As humanity’s final half-decade plays out, this well-hung, snow white-tanned, left-hand guitar-playing man who fell to Earth rises to significant fame only to suffer a self-inflicted - very human - fall from grace. ‘Making love with his ego,’ he alienates his fans, then loses his band. Everything here is exactly as it should be: Ronson’s riff’s supreme, Bowie’s vocal exceptional. But there’s even better…

With evocative lyrical imagery, Ziggy’s opening track introduced a scenario where ‘earth is really dying’ and as news of its fate echoes through the market square, Bowie, our narrator suddenly breaks from dispassionate description to tear down the fourth wall and draw the listener into the very heart of the narrative. The words “I think I saw you in an ice cream parlour” initiated a direct link between Bowie and a teenaged constituency that would last a lifetime. As hairs involuntarily rose on the back of countless necks, Bowie’s enduring star was born.

You cannot go wrong with an octave leap, it’ll guarantee you the back of the sure-fire-hit net every single time. It initiates an emotional response in the listener, songwriters know not to use it too often, to wear it out, but employed in the right song, it’ll launch a career. When it came to songwriting, Bowie most certainly knew his craft. The greatest Tin Pan Alley octave leap of all time is Judy Garland’s delivery of the word ‘Some-WHERE’ in Over The Rainbow. Leaving nothing to chance, Bowie dropped the octave bomb not once but twice to launch his career. And you really can’t argue with Star-MAN any more than you can with Life On MARS’. The rest of it’s not bad either…

Back in 1972, in a suburban bedroom doubtless scarred with quite horrible wallpaper, our wide-eyed teenaged listener has been locked in the recovery position since 2 minutes 15 seconds into Five Years when Bowie admitted once seeing them in an ice cream parlour. Would they be acknowledged again? Could hairs be raised by listening to music twice in a lifetime? Rock ‘N’ Roll Suicide begins by putting a self-analytical cigarette into its listener’s mouth, it’s understated, acoustic… it’s wearing a denim shirt. But it’s noticed you, and how wretched you feel, stuck between childhood and adulthood: confused, unacknowledged, alone… Then, as if reading your mind, at 1:39, Bowie delivers the line… “Oh no, love, you’re not alone” and in an instant your ‘60s Kansas monochrome life turns ‘70s Oz Technicolour. Fireworks illuminate your soul, your heart swells in your chest and those, hitherto dormant, neck hairs are back up again. At 2:27, Ziggy Stardust tells you ‘You’re wonderful’ and from that moment on, you belong to David Bowie. It’s as simple as that. As Mick Ronson’s glorious, final, string-driven crescendo rings out, you simply cannot wait for it to end. Not because it’s not the most marvellous moment in any pop music you’ve ever heard, but because the sooner it ends, the sooner you get to play it again.

David Bowie: the smartest guy in the room