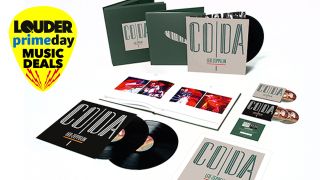 Amazon Prime Day will bring us a few bargain priced boxsets and vinyl releases in the next 24 hours, but the biggest bargain so far may well be this Super Deluxe Edition of Led Zeppelin's Coda .

Originally a contractual hotchpotch of career-spanning outtakes, the Super Deluxe was the only one of Zep's recent reissues given the three-disc treatment, with a total of 15 extras as disparate as the album itself. Originally £108.54, it's reduced today to £69.56 – a whopping 35% off.

Plus those bonus tracks on 180 gram vinyl in a new sleeve featuring negative artwork based on the original album artwork. This first pressing includes an LP sized, individually numbered, high quality print of the original album cover (one of 30,000), not to mention an album-size 72-page hardback book.

You can read Classic Rock's review of the album or click below to make the most of the offer while it lasts.

Led Zeppelin – Coda Super Deluxe Edition: was £108.54, now £69.56
Zep's last album gets a bad reputation but this super deluxe box really did unearth some extras. 3 CDs, 3 vinyl records, an art print and a book. Get it while you can.View Deal

Other boxsets in the Prime Day sale!

David Bowie – Who Can I Be Now? 1974-1976 boxset: was £104.73, now £69.83
A 12 CD box that features all of the material officially released by Bowie during the so-called ‘American’ phase of his career from 1974 to 1976 – Diamond Dogs, David Live, Young Americans, Station to Station – and a bunch of other stuff besides, including The Gouster, an abandoned work-in-progress that laid the ground work for Young Americans, Live At Nassau Coliseum 76, and a new compilation entitled RE:CALL 2,  a collection of single versions and non-album b-sides. With a 128 page book and a much more respectable price, it could be time to snap up this definitive look at Bowie's second (3rd?) wave.View Deal

Bob Dylan – Another Self Portrait (1969-1971), The Bootleg Series Vol. 10: was £90.54, now £44.90
50% off this highly-rated Dylan box from 2013. This four-disc deluxe boxed set includes the first complete release of the historic August 1969 Isle of Wight Festival performance, the Self Portrait album remixed, and two hardcover books by Greil Marcus.View Deal

Bon Jovi – The Albums vinyl boxset: was £189.46, now £135.69
24 LP box set featuring all of Bon Jovi’s studio albums remastered on 180-gram heavyweight vinyl. In the set are all of the band’s studio albums, including 6 albums available on vinyl for the very first time plus an ‘Extras’ bonus discs featuring rare b-sides from Bon Jovi’s international single releases and both Jon Bon Jovi's solo records.

Kraftwerk – 3-D The Catalogue vinyl boxset: was £148.32, now £101.63
An eight-album vinyl boxset from Kraftwerk from 2017, featuring the band's albums as performed live in the leading museums of the world. The art-work is as cool as you would expect and at 31% off, it's one of the biggest discounts of Prime Day.