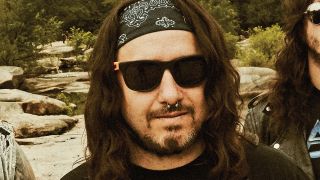 “I first got into music through the punk scene, going to Avail shows and trading music with people. This summer there was a big reunion and it was one of the craziest shows I’ve seen in my life. A lot of memories floated back and it reminded me why I got into music to begin with.

"I don’t give  a shit about my high school, but it’s the closest thing I’ll have to a high school reunion. It’s funny, Pyromania was one of the first metal albums I really got into, and lately we’ve been listening to High ’N’ Dry constantly. Switch 625 is my go-to when showing people Def Leppard because it’s so slick.

"Later, At The Gates were the first death metal band I got into. For most kids it was Cannibal Corpse, but I heard Slaughter Of The Soul and it blew my mind.

"One of the best Municipal Waste tours we ever did was the At The Gates reunion shows in the US – going somewhere like New York for a sold-out show and hearing the riff to Cold… intense.

I always thought Tegan and Sara were a really cool band and I loved the way they write songs; two sisters, openly gay and fighting for what they believe in. One of the most intense scenes I’ve ever been in was their show in Richmond, the day Trump got elected.

"Everyone was crying at just how bad the state of the world was. You don’t realise how fucked-up things are sometimes until you see how they affect other people. Richmond has always been a crazy place musically; even now there are way more bands than there should be.

"Born Against and Capitalist Casualties were the kind of bands who had intelligent lyrics, but also a very sketchy side to them. There was an anger to it which was very intimidating, the same as the first time hearing Morbid Angel or Deicide, like ‘Oh my god, Satanists!’, but this was  the real deal – oppressed people who were pissed off.

"I ended up playing in a band that were definitely a Dag Nasty worship band – I just loved those honest lyrics and Brian Baker’s riffs on stuff like Circles were incredible.

Everything Municipal Waste do obviously goes back to Slayer; I mean, who doesn’t love Slayer?! I got to hang out with them thanks to Gary [Holt] and we got to drink with them this summer.

"My entire stomach on the left side is  the Show No Mercy sleeve and I had to resist showing them – I didn’t want to cross the line. Our old drummer Brandon [Ferrell] used to play in this band Direct Control and I find them heavily influential. A lot of people were down on us when we signed to Earache, especially because we’d kicked Brandon out of the band.

"At the time, Direct Control were competition because that’s what Brandon did after Municipal Waste – we loved them, but we also wanted to get faster, and write better songs because of them. Brandon’s vocals on Plea For Peace left a huge mark on me – it pushed us to write albums like Hazardous Mutation.

I’ve loved Beastie Boys since like third grade; I got Licensed To Ill and had to hide it from my parents because it had swear words! I had no idea what rap music was, but the very first show I went to was Beastie Boys on the Check Your Head tour.

"I was the first kid in the line listening to them soundcheck, then got right to the front to see them play. Rollins Band opened; I clung to the barricade and my ass got pummelled the whole show.

I was obsessed with Wu-Tang Clan’s It’s Yourz when it came out. I almost got arrested! I got caught tagging Wu-Tang Clan all over my high school and town. I was taken in by the cops but never admitted to doing it, so I got off! Ha ha ha!”