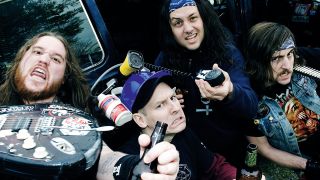 The skit was written at a pizza place

“We went up to Hadley, Massachusetts to record The Art Of Partying and we stayed at Planet-Z Studios. Zeuss [Chris Harris] is a good friend of ours and he produced the record and he used to take us to this pizza joint called Primo Pizza almost every night. We were working on Beer Pressure and we thought it’d be fun to create a skit in the song. Me and Tony [Foresta, vocals] were bouncing ideas around and we were like, ‘Let’s get these two guys who’re trying to convince their nerdy buddy to go out drinking with them to this bar,’ because it’s Beer Pressure – it’s a play on words ha ha ha!”

We stuffed in loads of our inside jokes

“Primo’s had this ‘wing-zing’ pizza, like this spicy buffalo wing pizza. For the skit, we renamed the bar these three guys go to ‘Wing Zingers’. We also really liked that movie The Stoned Age, it’s like a budget Dazed And Confused but a little bit more of a cult movie. The beer in the movie is called ‘Ox 45’, so I was like, ‘We got a whole keg of Ox 45,’ in this shitty Virginia Beach accent, because that’s where I’m from. Dave [Witte, drums] and I did two of the voices, but we thought it’d be really funny if Zeuss played the nerdy character. That’s an exclusive – like no one has ever known that until now.”

We never get sick of playing it

“The cool thing about that song which ties into our band now is the big Thin Lizzy/Maiden-styled guitar harmony. Now Nick [Poulos, guitar] is in the band, I go over to him and we do the duelling guitar thing. When we hit that harmony it brings the song to life – it’s my favourite part of the set. It’s like we’re playing a 2.0 version of the song now. I’m a big heavy metal fan, so it’s like the little bit of heavy metal in the set.”

We didn’t look at it as a thrash revival

“I hate to just look back at it as a trend. We were a band for eight years before that album, but that’s when people started catching on to us. We were just playing the kind of stuff that we grew up on. We’re still doing it now. So that revival thing, I saw a lot of those bands come and go and we’re still here. This song has become part of our classic material and it’s still exciting to play.”

There’s more to us than beer and partying

“I don’t like the party label that gets put on us. We have an album called The Art Of Partying, but that’s not all of what the band is all about. We may have dug our own ditch with that one, but it gets old. I wouldn’t sum up the band with this song but it’s fun to talk about.”

‘death before being sober’ is damn hard!

“Oh, it’s going to kill us for sure, ha ha! I’ve learnt to take breaks from partying when I’m off touring. I do have trouble staying away from it all when I’m on the road because it’s provided and you’re around a lot of friends; it’s a bar setting a lot of the time. So, it’s pretty hard to get away from. That lyric ‘death to being sober,’ it’s a double-edged sword, man!”

SLIME AND PUNISHMENT IS OUT NOW VIA NUCLEAR BLAST. MUNICIPAL WASTE PLAY BLOODSTOCK ON AUG 12

The Story Behind The Song: Coheed And Cambria's Welcome Home

The Story Behind The Song: Alter Bridge's Metalingus

The story behind the song: We Will Rise by Arch Enemy