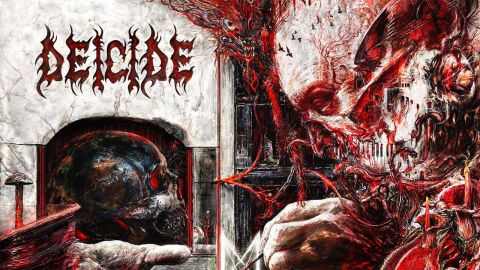 1. One With Satan
2. Crawled From The Shadows
3. Seal The Tomb Below
4. Compliments Of Christ
5. All That Is Evil
6. Excommunicated
7. Anointed In Blood
8. Crucified Soul Of Salvation
9. Defying The Sacred
10. Consumed By Hatred
11. Flesh, Power, Dominion
12. Destined To Blasphemy

Despite more than a few moments in their career when it seemed like the wheels were falling off, Deicide re-emerge in 2018 with their grim allure more or less intact. It certainly helps that the band’s last few albums have all been worthy additions to a catalogue that had plainly dipped in quality after an initial flush of youthful intensity. 2013’s In The Mind Of Evil, in particular, suggested that Glen Benton and Steve Asheim’s enthusiasm for doing this stuff – and doing it with more ferocity than anyone else – had been rekindled, the arrival of new guitarist Kevin Quirion the self-evident catalyst. That momentum has clearly continued into Deicide’s 12th album; Overtures Of Blasphemy is easily the most vicious thing the band have released since Serpents Of The Light, or perhaps even before that. Equally exciting is the fact that, glory days nostalgia notwithstanding, these are the most memorable songs the band have penned since that immortal self-titled debut back in 1990.

Anyone hoping for a simple retread of past glories is in for a disappointment, however. From opening declaration of intent, One With Satan, onwards, this is the fruit of the more straightforward and traditional approach Deicide have toyed with since 2006’s The Stench Of Redemption. There are no bewildering, Legion-style riff-mazes, just flat-out, three-minute extreme metal anthems, almost all boasting catchy, bellowed refrains and solos that owe more to KK Downing than Trey Azagthoth. But Deicide still beat the piss out of most other death metal bands, from any era, when it comes to sounding like they mean it and making every riff feel like a knife to the eyeball. Before death metal splintered into different substrains, this is what we wanted from it: hymns to Satan, played by maniacs and as proudly, belligerently metal as all unholy fuck.