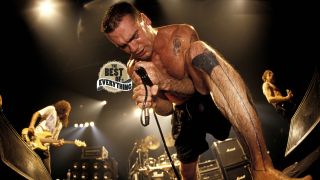 Chris Haskett was a member of Rollins Band from 1987 until 1997, and once again in 2006 for a US reunion tour. During that time, he played guitar on five studio albums and four live collections, as well as Henry Rollins’ two solo releases in 1987 (the full-length ‘Hot Animal Machine’ and the EP ‘Drive By Shooting’).

Here, then, are his pick of the best 10 songs from that decade-long period.

BURNED BEYOND RECOGNITION (Life Time, 1987) “I had the riff for this song in my head for a long time, but sometimes it won’t gel until you’re in the right moment. I remember bringing it to Andrew [Weiss, bass] and Sim [Cain, drums] and they brought it to life. I tend to think of riffs as shapes. It’s not quite synesthesia but it’s in that realm. The aesthetic elegance of a melody presents itself to me as a 3D shape a little. The riff for Burned Beyond Recognition – dada dada da bom – was a nice and angular. Dischord re-released Life Time on vinyl recently and I hadn’t listened to it for ages. I was shocked at how fast it is on the record. The more we’d play, Andrew would play it slower and slower. He was right. There’s a live recording from ’88 or ’89 and it’s much heavier than the album version. Don’t get me wrong, Ian [MacKaye, Life Time producer and Fugazi member] did a fantastic job on that record. But man, if we’d recorded it at the tempo we’d play it live a year later, it would have crushed buildings.”

DISCONNECT (Weight, 1994) “Disconnect was one of the best vehicles for the way Rollins’ voice was at that moment and one of the most fun songs to play. Tonally, it was very interesting; I was using a Whammy octave pedal and the guitar’s voicing is very much from high to low. Then there’s that high harmonic in the guitar line, a kind of Indian melody on the chorus and a hard rock riff, like Aerosmith but an octave down. It was the perfect blend of groove and angle – a lot of our riffs were very angular in a King Crimson way. Melvin Gibbs [Rollins Band bassist from 1993-1998] brought a different kind of depth to his instrument and his playing brought a lot of space to the songs we’d write.”

TURNED OUT (Life Time, 1987) “Turned Out has to be in there. It was a song that Sim wrote from beginning to end. We were rehearsing in the Netherlands in ’87 in a Dutch classroom. We made huge amounts of noise there. Sim was playing Andrew’s bass one night and came up with this riff. It’s very elegant and stripped down, very similar to Disconnect. Part of it was also in 5⁄4, which was kind of fun. Everyone in the band always contributed to a song’s final shape, but this song was one Sim had from beginning to end.”

THERE’S A MAN OUTSIDE (Hot Animal Machine, 1987) “It’s not from a Rollins Band record [Hot Animal Machine was released as Henry Rollins] but we played a lot of those songs on tour. It’s crazy. I was hanging out with Rowland Howard from The Birthday Party at the time and I’d been listening to those records a huge amount. At that point, he was doing Crime & The City Solution. That single string attack riff was totally informed by Sonny’s Burning [from The Birthday Party’s 1982 EP, The Bad Seed]. It had a working title of The Road Song until Rollins had words for it – because it sounded like a car careening down the road. I’m constantly writing riffs – I have tapes and tapes and would bring them to rehearsal. I’ve still got them all from around the time of Hot Animal Machine. This riff was one of the better ones.”

A MAN AND A WOMAN (Hot Animal Machine, 1986) “This was one the bass player at the time wrote – Bernie Wandel. It’s a cool song – very Rowland Howard, very Birthday Party-ish.”

LIAR (Weight, 1994) “Liar starts like a Motown song and has a soul groove. That was another riff that was around for ages. The main part was new, but the ride out at the end was old. I called that the ‘Lou Reed’ riff and it was kicking around in my head back when Tool were opening for us. I remember jamming on it for half an hour in a club in Atlanta, but it didn’t catch fire at that point – but it stayed in my head. There’s certain riffs and melodies that won’t go away. This one kept coming back! It wouldn’t leave me alone. When the record company chose to release it as a single, I just groaned. I was like, ‘Oh my God, nobody’s going to like it!’.”

NEON (Come In And Burn, 1997) “On Come In And Burn, we were in legal limbo for a long time. We were still rehearsing, so we ended up writing a whole batch of material. I think it’s the best sounding record we’d made, but I think some of the songs are overwritten; I’m not saying they’re bad, but every T is crossed and every I is dotted. We couldn’t put any more parts into those songs. I think if we had two months to write a record, it would’ve been great and a little more coherent to me. There’s a lot of music I like on that record and a lot of words I like on that record – but they’re not usually in the same songs! Neon is up there with Burned Beyond Recognition and Disconnect as one of my favourites to play. It’s one of the better mixes of words and music we were writing. There also was a song called Fall Guy and the riff was very Alice In Chains-y. I really liked it, but no-one else in the band really liked it that much.”

HARD (Hard Volume, 1989) “Hard was always fun to play, but I was playing beyond my means at that point [of recording]. If you listen to that song, it’s got a lot of [Van Halen’s] Hot For Teacher in it. It’s like rock band playing a big band song.”

TEARING (The End Of Silence, 1992) “I really loved playing that. If you play that on guitar, the riff has a Van Halen shape to it. [US filmmaker] Modi made a fun video for the single, too.”

JOY RIDING WITH FRANK (Hard Volume, 1989) “The title comes from Blue Velvet and was the last track on Hard Volume. We recorded a cover version of [Velvet Underground’s] Move Right In for Hot Animal Machine because I loved the original song but only knew it from bootlegs. But when Andrew joined the band, the song morphed into this enormous encore jam and it was so fun to play. That version isn’t the best, but it’s a good document of how good that band was right then. Most of those changes were not rehearsed. We knew what we were doing next, just we didn’t know when. That’s a tight fucking band, right there, and Andrew and Sim were totally on fire.”

Chris Haskett’s latest album The Courage Born Of Conflicting Terrors is out now. Get it now on Bandcamp.