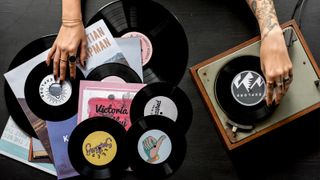 The vinyl revival is here to stay. According to figures recently released by the British Phonographic Industry (BPI), 2019 was home to continued gains for the format with 4.3m LPs shifted. That’s the biggest total this century, and the 12th year in a row that sales of vinyl records have been on the rise. So, perhaps you’re thinking of getting in on the action by buying the best turntable for your budding vinyl collection?

Unfortunately, right after this thought hits, some people run into a stumbling block. Vinyl is a fetishistic medium full of odd terms and eccentric bits of kit, and on paper it can all be a little overwhelming, but it doesn't have to be. In fact, the reality is far more simple and enjoyable, and it really is easy to find your ideal first record player – you may even find it in our round-up of the best budget turntables.

Allow us now to guide you through how to buy your first record player easily and enjoyably, so that you can dive headfirst into the most satisfying music format there is. We'll make a vinyl junkie out of you yet.

How many types of record player are there? Plenty, is the short answer. There are the super-cheap, plug and play suitcase turntables such as the Crosley Cruiser, which looks great but doesn’t really deliver the fidelity your record collection deserves thanks to its tiny built in speakers (serious audiophiles will also tell you it'll destroy your vinyl). There are also 'all in one models' that follow classic designs by keeping everything neatly tucked away. These include the versatile Teac MCD800B.

This system, and plenty of others like it, is also home to a CD player, a good old fashioned AM/FM radio, and features including Bluetooth capability. A standalone piece of kit like the Sony PS-HX500 bridges the gap between your basic deck and the 21st century, with USB connectivity enabling you to rip LPs to your computer as ultra high quality digital files. Then there’s old faithful: a straight up turntable that does exactly what it says on the tin.

How to buy your first vinyl record player: budget

All of these record players exist on a sliding price scale, with some infinitely more affordable than others. The Sony PS-HX500 is a good all-around performer with maximum plug and play convenience, and can regularly be found for under £300. Similarly, the Rega Planar 1, a superb entry level turntable, is out there for around £249.

Take a hundred quid off those price tags, meanwhile, and you can still find real contenders such as the Pro-Ject Primary E. Sub another £150 off and you’d still be able to walk away with the entirely competent, remarkably cheap Lenco L-85. Most of these models boast sleek, minimalist design schemes. Actually, the Lenco is an outlier, but there’s definitely something to its boxy charm.

The temptation may be to go for a dirt cheap suitcase record player to get started, which is cool, but beware: a poorly constructed turntable can have more issues than just tinny sound, with a lack of counterweight for the tonearm, undersized platters and predetermined tracking force all capable of doing damage to your records – beware if you have any valuable vinyl records in your collection.

You won’t have much choice in the matter if you choose an uber budget option, so think of splashing a little more cash at the very outset as an investment in getting maximum plays out of your records.

What sound quality should you expect?

The crucial thing with any record player, even at a budget level, is that it enables you to experience your records as intended, so when buying your first record player, sound quality is still an important consideration. You should temper your expectations accordingly (as let’s be real, you get what you pay for), but many entry level decks are capable of delivering decent audio in style.

The Rega Planar 1, for example, punches well above its price point, offering warm, detailed sound and a sense of depth. In this instance, it’s worth investing in a record player with brand recognition to assure a base level of quality.

Along with the Sony and Rega models, there are excellent, relatively cost effective decks available from Audio Technica (check out the AT-LP3, a killer take on the suitcase turntable) and others from the Pro-Ject range (see the T1, a bass heavy machine ready to deal in riffs).

Choose a vinyl record player that's easy to set up

Once you’ve made your mind up on a particular turntable, you might begin to worry about actually getting the thing set up. Well, don’t let anyone try to scare you by telling you they’re impossibly complicated. If the vinyl revival has taught us anything it’s that people are embracing the format because it’s not a huge headache to sit down and chuck some music on.

And at the budget end of the scale, record players are designed to be unfussy and easy to get along with. Something like the Audio-Technica AT-LP3 is as plug and play as you can get, while the Sony PS-HX500’s bells and whistles are crammed into a package that prizes user-friendliness as much as it does punchy sound.

Even when there are idiosyncrasies, such as having to remove the platter and shift rubber bands to switch between 33 and 45 rpm on the Rega Planar 1, they are simple to navigate once you know how.

How to buy your first vinyl record player: features

Before you sail off into the sunset with your new vinyl record player, there are a few extra external considerations to make. Some turntables come with something called a built-in phono stage, which provides standard equalisation and boosts the signal from your deck to a level that enables you to connect it to your stereo, and some don’t.

The Rega Planar 1, for example, does not come with a built-in phono stage, so you’ll have to pick up a preamp or an amplifier that boasts a phono stage of its own. The easiest way to find out if your turntable has a built in phono stage is to plug it in and drop the needle – if the volume kicks as it should, you’re golden.

Then there’s another important element: speakers. As mentioned earlier in our guide to buying your first vinyl record player, there are some suitcase-style turntables and all-in-one decks that take care of this but they can struggle to handle the workload. You’re supposed to be able to get lost in a vinyl record, to feel the sound enveloping you. That won't happen if your speakers are sub-iPhone quality.

Expect to pay a wee bit for a decent pair (broadly speaking, ‘affordable’ in speaker terms is anything from £100 to £500) or take on the fun task of finding some old beasts that have a few runs around the block left in them. And while you’re at it, pick up a pair of the best headphones to get lost in your vinyl collection even when everyone else has gone to bed.