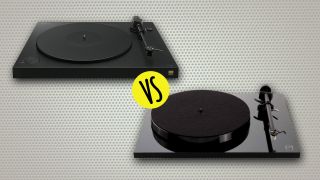 What makes for a great budget turntable? Your answer to this ostensibly simple question is likely all you actually need to decide which of these two class-leading decks should make it into your home.

Great sound is a given, and we wouldn’t dare recommend anything that didn’t possess a few gem-like sonic characteristics. But what else is it about?

If you want heaps of features, the ability to plug your turntable straight into an amplifier or powered speaker and the facility to rip your vinyl to hi-res digital files, the quick answer lies with Sony’s PS-HX500.

For the best value sound from a record player this side of half a grand, you’ll not regret the little extra system building it takes to accommodate the Rega Planar 1.

So, two worthy contenders, but which one will earn the right to spin your well-loved metal and rock vinyl collection?

Fans of minimalist aesthetics are likely to be enamoured by both designs, each with clean-cut rectangular plinths displaying proudly their platter and tonearm.

But Sony and Rega have had rather different focuses in building these decks. Sony has packed in a phono preamp, an analogue-to-digital converter and USB output, meaning not only can you plug your deck straight into any amplifier, but you can also rip your vinyl to digital.

And no doubt you’ll have spotted that Hi-Res Audio sticker: using free software, the PS-HX500 can convert your old black discs in better-than-CD quality, in DSD (5.6MHz) or WAV (up to 24-bit/192kHz).

That isn’t to say the Planar 1 is bereft of technology, though – just that the kind used by Rega is all to do with best-possible performance. From the precision bearings of its RB110 tonearm, terminated by a Rega Carbon cartridge, to its Thermoset, gloss-laminated plinth: the RP1 is every bit the product of decades of experience from a multi-award-winning manufacturer.

There was a time when you’d have to buy your deck, tonearm and cartridge separately and then put it all together yourself; those days are thankfully behind us, in terms of budget decks at least.

All you really need to set up either of these decks is to put in place the platter and mat, hook up the belt drive and balance the tonearm. In the case of the Rega, bias adjustment is automatic, and they’ve even marked the ideal position for the tracking weight, assuming you’re using the supplied cartridge.

You will have to think about a phono preamp with the Planar 1, though. A phono stage essentially dials in the bass frequencies – by design, a vinyl record can’t hold much low-end information – and amplifies the signal hugely before it gets to your integrated or power amp. Without it, you’ll just get a tinny, barely audible signal coming from your speakers.

Don’t rush out to buy one straight away, as your amplifier might already have a phono connection. Even if you do have to budget for a separate component then don’t let that put you off either: even one costing less than a ton – such as the Rega Fono Mini A2D, which also rips your vinyl – will make a budget deck sound noticeably better than anything it might have built in.

In terms of character the Sony and Rega are actually rather similar. Both paint marvelously detailed sonic imagery with bold, clearly defined strokes. Neither is concerned with pandering to that faux analogue warmth, which actually usually sacrifices insight and entertainment for more sausage-like lower mids, but each is capable of driving rhythms with a decent amount of punch.

The only problem with comparing like-for-like is that these aren’t like-for-like record players. The Sony did enter the market at a higher price than you find it now, but still if you consider the cost of the features on board you’re actually getting a rather much cheaper deck. And that’s before you budget for an outboard phono stage with the Planar 1.

It’ll come as little surprise, then, that the Rega is a superior performer in every respect. Its added levels of clarity and detail are one thing – this is a true hi-fi component – but you feel it most in its assured sense of organisation, rhythmic timing and dynamic range. It can be the difference between a performance sounding like a rehearsal or the main stage headline act.

Which is better is a difficult question to answer, because these are turntables for two different sets of people.

The Planar 1 has been one of the go-to budget decks since Rega unveiled its first iteration back in 2010, namely because it values sonic aptitude before all else. It is more than an entry-level turntable; this is a record player that will push a budget system to its limits and is likely to be the last component in need of an upgrade.

If you’re as single-mindedly concerned with audio quality as Rega, then you won’t find better sound-per-pound value until you double your budget for the company’s Planar 3/Elys 2 combo – and that means significantly upgrading the rest of your system, too.

But if you’re about convenience and features, then you’re still not being short-changed on sound by the Sony PS-HX500. The fact you can plug it straight into your Bluetooth speaker – assuming your speaker has an aux or RCA input – and play your records without a traditional hi-fi system is undoubtedly a huge plus. The vinyl ripping feature is also incredibly easy to use with the free software available from Sony’s website.

Just ask yourself this: when that grimy riff approaches, dragging its grazed knuckles across the concrete floor, do you want to hear it as soon and as easily as possible, or do you want to feel it as it clocks you one between the eyes? Therein lies the answer.