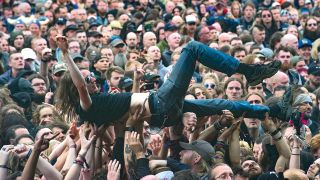 The worlds of rock and metal was devastated in the last few years, first with the shocking suicide of Soundgarden and Audioslave frontman Chris Cornell and then by Linkin Park's vocalist Chester Bennington tragically taking his own life. These incidents shook the rock community, but they also helped shine a light on the issues that musicians, even those who have gained fame and success, are facing.

While it has been proven that music can actually improve mental health, blasting our music loud and regular headbanging can only do so much, and with many metalheads drawn to the genre due to their trauma, battles with depression and feelings of alienation, there is still so much more we can all do to be an active ally.

In honour of World Metal Health Day and all those who are fighting every single day, Hammer speaks to the experts about how we can take positive action to help those struggling with mental health problems...

Giving your time to others is invaluable. Samaritans volunteer Diogo Duarte tells us how their helpline can save lives

Volunteering for the Samaritans always seemed like an obvious choice for Diogo Duarte. “If you’re not scared to talk about death and self- harm and have difficult conversations, you can make a real difference,” says the 30-year-old, who lives in Clapham and volunteers at the central London branch. He tells us he’s always been fascinated by human psychology, but it’s also his love of metal that helped him address those often tricky topics.

“I’ve been a metal fan since I was 14 years old,” he says. “Having been a goth as a teenager, these issues about mental health and suicide never frightened me. Talk of self-harm, suicidal ideation and depression wasn’t unheard of in my close group of friends. It was a really supportive community because it was so easy to talk about those things.”

Diogo has worked in mental health-related roles since 2010, and joined the Samaritans as a Service Improvement Officer, working on their suicide prevention and support programme for schools and colleges, last year. He volunteers on their helplines outside of his staff role.

“We’re there to allow people to reach out and talk and be themselves,” he explains. “They can talk about how they’re feeling without having someone on the other end telling them that they must feel differently. Sometimes, being listened to in a nonjudgemental way will make someone feel better, sometimes it won’t. But it’s not our role to fix it or get them out of that state. It’s a nice side effect if it happens, but our objective is more passive about that, because telling someone they’ve got a million reasons to be happy when they’re depressed isn’t helpful.”

Samaritans require all volunteers to undergo a training course of several weeks (the length varies between branches) involving a few hours each week. “It’s very role-play heavy, which used to scare the shit out of me!” laughs Diogo. “I absolutely felt at the end that I was equipped to deal with it. When you pick up the phone or open an email you still have no idea what you’re going to get.”

Volunteering can be difficult. “It’s challenging when you hear someone is struggling really badly to the point of taking their own life. When you put the phone down, you don’t know what happens next,” says Diogo. But there are uplifting moments, too. “It’s rewarding when people say thank you and that you’ve made a real difference. That’s when it really hits you why you’re doing it.”

As for why musicians and music fans might be particularly at risk of mental health issues, Diogo is pensive. “If you’re talking about musicians, there’s something to be said about the lifestyle – lack of sleep, drugs, the lack of structure and not knowing where the money’s going to come from, that’s a stressful lifestyle,” he muses. “The mainstream media has [accused metal of] encouraging those emotions, but I’m not sure that ever mattered to me, because it enabled me not to feel alone and to talk to my peers.”

Samaritans is already active within the metal community, and have a stand at Bloodstock festival that’s open 24 hours a day for anyone to drop in and talk to a volunteer.

Being able to talk openly about mental health is by far the most important aspect for Diogo. “You can learn that it isn’t this bogeyman and it is easy to talk about. We’re in desperate need of more volunteers; we put the phone down and the phone rings again. Sometimes a volunteer is the only thing that stops someone from taking their own life,” he says.

Becoming a volunteer is as easy as contacting your local branch of Samaritans and being able to give three hours per week and one nightshift per month. For more information, visit www.samaritans.org/volunteer-us

Put on a fundraising event

Want to raise some money for a mental health or suicide prevention charity? Seether’s Shaun Morgan explains how he organised charity fest Rise Above

When Seether vocalist Shaun Morgan’s brother took his own life 10 years ago, his life began spiralling out of control. “I spent many years in a daze. I drank and snorted a ton of coke to try to numb the pain, which was obviously incredibly stupid,” he remembers. “It was once I came out of that fog that I knew I needed to make his death mean something and try to turn that tragedy into a positive thing.”

The result was Rise Above, a music festival Shaun founded seven years ago. A percentage of all ticket sales goes to the charity SAVE, a Minnesota-based suicide prevention and support organisation that raises awareness through events and educational materials, conducts research and offers support to people who have lost someone through suicide.

“Rise Above is an annual music festival currently held in Bangor, Maine, which raises awareness about suicide and its rapid rise in our society,” explains Shaun. “Leading up to the festival we do a lot of press to help us get our message out. We try to reach as many outlets as possible so that we can shine a light on what we consider to be becoming an epidemic.”

As well as donating money through ticket sales, Shaun also has other strategies to raise money for SAVE. “We’ve got limited-edition merchandise that’s sold at the show only, which also contributes to the fund,” Shaun says. “We ask bands to sell VIP meet-and-greet packages for fans, and we also have an online action where bands and musicians donate signed memorabilia. Or people can simply make a donation.”

Currently, Rise Above holds 14,000 people, but Shaun says he’s hoping to expand it into other cities around the US to maximise its fundraising potential. As well as the music – Korn, Stone Sour and Halestorm are among the bands who played this year – there’s also plenty of places at the festival that attendees can get mental health support.

“There are stands with information and literature for people to take home with them,” Shaun tells us. “It’s published by SAVE so it helps people identify when someone’s in trouble. It might give someone who’s already in trouble an alternative option to reach out to the foundation and get in touch with mental health professionals.”

Having personally experienced the devastating aftermath of his brother’s suicide, Shaun is happy to talk to any fans who’ve also been affected. “I personally talk to hundreds of people a year about suicide, especially families or people who have experienced the loss of a loved one,” he says. “It’s incredibly painful to hear the stories so I try to be as compassionate as I can and really just be there to listen. I’m not a professional so I don’t talk about the health aspect but I do try to give comfort to those who have lost someone they love. Each and every story strengthens my resolve and increases my determination to help as many people as I can.”

Shaun’s links in the metal world mean he can book high-profile bands each year, but he says that a lack of contacts or experience shouldn’t deter anyone from wanting to put on their own event. “It needn’t be a huge affair with tons of bands,” he says. “As far as I’m concerned, any event that helps raise awareness, regardless of size, is important and worth supporting.”

SAVE has resources and information on their website for US residents who want to set up an event, but here in the UK, Mind also provides ideas, support and fundraising packs to anyone wanting to set up an event in the name of mental health.

Mind’s Stewart Lucas explains how he’s working to change people’s perceptions of those with mental health conditions, and how campaigning can help

“My passion is equality,” says Stewart Lucas, Chief Executive of the Lancashire branch of Mind. The 46-year-old dad has worked for the mental health charity for the past four years, and took the role so he could help influence the way mental health is perceived.

Stewart has also been a metal fan since the mid-80s, and says he’d love to see more people from the alternative community volunteering. “Most of our volunteers tend to be retired people and your archetypal volunteer,” he says. “We don’t get young people from the alternative lifestyle, and I’d say that just because you’re into metal or have tattoos and piercings, it doesn’t stop you volunteering. I think young, alternative people get the idea of ‘they’re not gonna want me’ or think people will look at them [strangely] because of the way they look – there is still prejudice about our community.”

The judgement and bullying that some people face for their appearance or lifestyle can in itself lead to mental health issues, and that’s all the more reason, Stewart says, for people who might be considered unconventional to get involved with the cause. “It’s a decade since Sophie Lancaster’s murder but that prejudice is still there. We’d welcome with open arms more people from our community. I think there’s a feeling of ‘we like to be slightly distant and the mainstream does their thing’ but I think there’s a real opportunity there,” he says. To get people from the metal world on board, Stewart says he’d love to see Mind have a presence at gigs and festivals, similar to the Samaritans tent at Bloodstock festival.

While volunteers are the “lifeblood” of Mind’s work, Steve also works closely with the public sector in Lancashire to improve the way mental health is dealt with. “We lobby local government and the NHS, trying to get them to change the way they view mental health and make sure it gets the same investment as physical health,” he says.

Lobbying does have a positive effect, as demonstrated by Mind’s work around the 2015 general election. 2,500 people sent the Mind Manifesto – which addressed issues like mental health funding and treatment referral times – to their local MP, and 100,000 people signed a petition on funding that was delivered to 10 Downing Street. In 2015, the Chief Executive of Mind chaired the Mental Health Taskforce, which set out a five-year plan for the NHS’s mental health strategy.