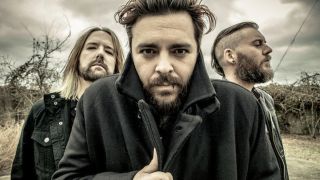 Congratulations on the success of the new album: presumably Top 10 chart placings aren’t something you take for granted in these troubled times for the music industry?

“Thanks man. We had a great first week which took us all a little bit by surprise, but we’re very proud of it. And we’re as aware as anyone about the state of the industry. We were in the process of writing this album when I was alerted to us being sold by our former record company to a different label by one of our street teamers who found a leaked press release: the label were apparently going to tell us the news the next day! It was a pretty horrible, ugly mess – we got sold on without as much as a courtesy call, which was pretty brutal considering we considered these people friends. I was pretty upset and pretty scared, because I didn’t know what was going to happen next: it was a trying time for all of us.”

Did you take this quite personally, given that lack of respect the label showed you?

“Well, yeah, considering that we’ve known these people for 12 years, you’d have thought someone might have had the decency to tell us. At a point we felt like our success was keeping that label alive, but it just goes to show how fake some people can be: to some people we were nothing but a dollar sign. Our new label is great, they’ve been hugely supportive, but yes, of course I took it personally at first. I spent a long time sequestering myself from the outside world because I didn’t want to talk to anyone: I sat and drank and put myself in harm’s way many times because I was miserable. That’s not the healthiest way to deal with things, but that’s what happened. When you’ve had a career for 12 years and been successful and then its pulled from under you, and you have absolutely no idea what the future will hold, it really knocks the wind out of your sails. At times I might even have been suicidal. This could potentially have destroyed us.”

Clearly that turbulence fed into the songs on Isolate and Medicate, which are pretty dark in places, but now that you’re in a happier place mentally was there any temptation to rework material from that period to give things a more positive spin?

“Well, you have to stay true to yourself. The words I wrote definitely helped relieve the frustration I was feeling at the time of this upheaval, and sure I could go back and change stuff, but it wouldn’t be as honest. I’ve made some compromises before, and I regret those. For instance, I was once asked if I’d changed some lyrics to a film we were giving to a movie soundtrack, to make them more relevant to the film, and afterwards I felt guilty about it all. Sometimes you get given opportunities and they turn out to be crap and you feel crap for selling a piece of yourself.”

Have you become disenchanted with the state of the industry?

“Well, it’s a tough industry, but it’s easy to say things with hindsight. So much depends on the almighty dollar and keeping the machine running. When we signed our first record deal someone said to me ‘Now get ready for the hard work’ and I was thinking ‘Surely the hard work is getitng signed?’ But they were right. When you sign you literally sign your soul away, and even your name doesn’t belong to you anymore. It’s kinda bizarre and terrifying when you think to yourself, ‘Okay, I’m no longer a person, I’m now just a barcode that these people own.’ Our new label are good people and because of their excitement and enthusiasm, we’re in a good place, but it wasn’t always so. I love this industry and I hate it at the same time.”

Your profile is a lot lower in the UK and mainland Europe than in the US: are you hoping to rectify this with the album campaign?

“I really hope we can make up for lost time. Our old label was so concerned with America, that the rest of the world got overlooked. I mean, it’s crazy to think that a band that has been signed and toured hard for 15 years has never visited Asian or South America. It breaks my heart that we haven’t done more. We’ll be on tour in Europe and see that bands like Alter Bridge and Black Stone Cherry are much bigger than us over here, but so much smaller than us in America. For years we thought we were having great album sales and getting great radio overseas, and it turns out we didn’t really have anything. I guess we didn’t pay enough attention. When you’re drunk and touring you don’t really pay attention to what’s going on behind the scenes, and bands need to start focusing.”

It seems then you’ve still have great aspirations for Seether, despite all your success?

“We’ve had a great run, but sure, we want more. We feel that all the stars are finally aligned for us, with the new record and the new label and re-energised management, so that not only can we enjoy what we’ve achieved, but aim higher. It’s kinda cool to still have targets. We’re in a really good place. And we think this band has a lot more to give.”

SEETHER’S ISOLATE AND MEDICATE ALBUM IS OUT NOW VIA THE BICYCLE MUSIC COMPANY/SPINEFARM.