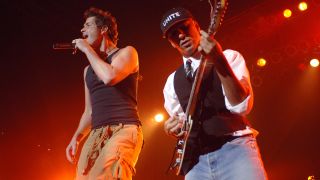 Tom Morello says there are unreleased Audioslave tracks featuring Chris Cornell that will eventually see the light of day.

The guitarist was taking questions as part of Kerrang’s In Conversation With series when he said: “There’s not a lot, but it’s pretty great and it will come out at some point.”

But he cautioned: “I don’t know when.”

Kerrang report that Morello was asked about Sleight Of Hand which the group played live but was never laid down in the studio.

Morello replies: “It was going to be the first single for Revelations but Tim Commerford really hated it because he thought it sounded like a Danzig song, which is weird.

“He yelled, ‘Fuck you!’ a lot to the head of the label. We said, ‘Let’s not put it on the record because we’re about to get dropped.’

"That one will see the light of day. There’s some other jams too but there’s no plans for that."

Speaking in September 2017, Morello said that he and Cornell had discussed the possibility of reuniting Audioslave after playing together live in January of that year.