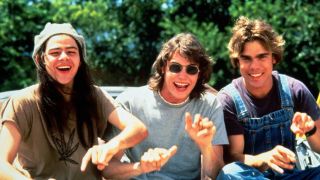 Ever since Bill Haley first made his way around the clock face back in 1955, movies and musicians have walked hand in hand, with rock’s great and good providing the soundtrack to big screen rebellion, coming-of-age comedy, and films in which the blind are gifted pinball operatives.

Here are 10 soundtracks that provide a stellar backing to their celluloid companions.

A soundtrack album that came out two years before the movie? In truth, Alan Parker’s film was more like the ‘picture track’ to the album. Years later, the two are now inseparable, the movie making sense of this, the Floyd’s last classic. And those solos on Comfortably Numb…

Pete Townshend’s song of a deaf, dumb and blind messiah was turned into an apocalyptic pinball ride by Ken Russell. The Who dominate the soundtrack, but Eric Clapton, Tina Turner and Elton John add their charm. Is this better than the original album? It’s a lot more bombastic.

The soundtrack to Cameron Crowe’s love letter to music is a brilliant 70s rock mixtape. Elton’s Tiny Dancer gets a new lease of life and is joined by tracks from The Who, Bowie, Zep and more. Fever Dog by Stillwater is the best 70s rock song that never was.

A fascinating documentary principally based around the iconic band’s three-night stint at Madison Square Garden in New York at the end of 1973. The soundtrack also served as Zeppelin’s first official live album. Dazed & Confused is Page at his best.

The Who - The Kids Are Alright

Soundtracking a film that covers some of the most glorious moments of their career, this is basically a live best-of from one of the best live bands in rock. A Quick One While He’s Away was so good the Stones pulled it from Rock’N’Roll Circus.

The Band - The Last Waltz

From the ‘yodelling bit’ in opener Up On Cripple Creek to a climax that makes Bob Dylan sound heavier than ever, via guest spots from Joni, Muddy and Van, The Last Waltz is a 70s rock essential. The Night They Drove Old Dixie Down is epic.

A ‘Kiss movie’, but a soundtrack with a difference: a playground scrap in which modern rock bands tackle classics while Sabbath, Lizzy and, yup, Kiss fly the flag for the old school. The old school couldn’t lose. And you gotta hear The Boys Are Back In Town by Everclear.

The film might not be all that fab, but its soundtrack is. Does it get any better than a collection of Beatles classics that includes Strawberry Fields, Penny Lane, Fool On The Hill and All You Need Is Love? It’s easy to forget how good that title track is.