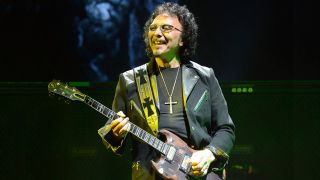 The metal icons’ The End trek will be completed with two shows in their home city of Birmingham on February 2 and 4, bringing their career on the road to an end after 49 years of action.

One of the main reasons for calling a halt is the guitarist’s health concerns after his battle against cancer.

Iommi tells Talk Is Jericho: “It’s going be such a weird thing because Black Sabbath’s always been my life.

“Everything fell by the wayside to Black Sabbath – all the marriages and everything, because I’m always out working and always doing this, always in the studio.

“It’s going be pretty weird, that last show. I don’t know how anybody’s going to feel. And after that, who knows?

“I’ve been asked, ‘What are you going to do after this?’ Well, I don’t know. As long as it’s not world touring, I’m all right.

“It’s just the traveling that gets me. Since I was ill, it really does affect me now.”

“When I got ill, that’s when I started getting vulnerable. Before that I could do anything – but I suddenly felt deflated and lost a lot of confidence.

“That’s what’s brought about the end of this, really, because the constant touring does eventually get to you.”

Asked about the chance of festival appearances in the future, Iommi says: “I wouldn’t write that off, if one day that came about. That’s possible.

“Or even doing an album, because then you’re in one place. But I don’t know if that would happen.”