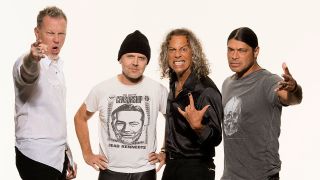 What’s that ruckus outside the front door? A bunch of Halloween kids trick or treating? The unquiet dead risen from the grave to claim the world from the living? Oh, no. It’s Atlas, Rise! another new Metallica song let loose to roam the streets ahead of their tenth album, Hardwired… To Self-Destruct.

Without wanting to sound churlish, this whole drip-feeding-new-tracks thing is getting a tad tedious. Sure, Hardwired (the song) was a revelation: a thrashtastic return to the glory days of the mid-80s and a fist in the sneezer of anyone who thought they’d lost whatever made them so great in the first place. And if Moth Into Flame was more measured and less breathless, it still showed that those endless months in the studio hadn’t atrophied Metallica’s muscles. But enough of this endless tease. Let’s hear the album.

No? OK. I guess that gives us time to digest Atlas, Rise!, a song so excited by itself that it comes with its own exclamation mark.

In fairness, it has every right to be. Like Hardwired and Moth Into Flame before it, Atlas, Rise! is the sound of a band who have finally put all that post-millennial turmoil behind them and reconnected with their inner fire. Swagger, confidence, a killer riff: this is what you want from Metallica.

If Hardwired and Moth Into Flame called back to a very specific period of Metallica’s past – namely that golden period from 1984-1988 – then Atlas Rise! could be read as a whistlestop tour of their career. There’s tighter-than-a-duck’s-quacker riff which evokes nothing so venerable as Jump In The Fire from Kill ’Em All. There’s the swinging groove, which wouldn’t have sounded out of place in the unjustly maligned Load era. There are enough cunning time-changes to keep the prog-heads who champion …And Justice For All happy.

But what could have been a Frankenstein’s Monster of musical body parts – hey, it is Halloween – hangs together perfectly. Like Moth Into Flame, it doesn’t feel like anything here is being dragged out beyond its natural lifespan (we’re looking at you, St Anger…).

Central to it all is a characteristically bullish James Hetfield vocal. In Greek mythology, Atlas was a Titan sentenced to support the sky on his shoulders. Here, Hetfield is kicking back against the “bitterness and burden” of being in that position (metaphorically, of course). In that respect, it’s a typical “don’t let the world grind you down” Metallica song (though one line sounds suspiciously like ‘drummer wears you down’ – what could he mean?)

Like the two songs that preceded it, Atlas, Rise! augurs well for Hardwired… To Self-Destruct. After a decade of waiting, Metallica’s late-career hot streak is on. Now, fer chrissake, let’s just hear the album…