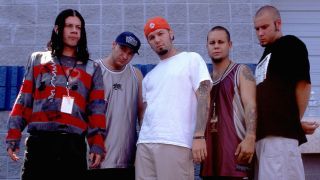 There’s more to Limp Bizkit than a red cap and crap dance moves imitating automobiles. Honestly. Throughout their 21-year career, Jacksonville’s much-maligned miscreants have brought nu metal to the mainstream in a way that surpasses even Korn, selling over 40 million records along the way. While the world awaits their semi-mythical seventh album, we give Bizkit’s catalogue a reappraisal.

Results did indeed vary when Bizkit’s fourth LP – and first without iconic guitarist Wes Borland – rolled onto shelves with the force of a lacklustre, late-night fart. Eat You Alive and Gimme The Mic admirably tried following Chocolate Starfish And The Hot Dog Flavored Water with their Full Nelson-esque bouts of aggression and catchiness, but otherwise this record is a bit cack. Borland’s absence is painful, leaving vocalist Fred Durst and Snot guitarist Mike Smith to churn out woeful ballads and stuff like Creamer (Radio Is Dead) and Let Me Down: mid-tempo, lifeless crooners that make Staind sound like Cattle Decapitation. Sure, Durst dubbing himself “The inFredible D” in Phenomenon is funny enough, but Terry Date and Rick Rubin produced this album – even that wasn’t enough to save Results May Vary. And let’s keep that cover of The Who’s Behind Blue Eyes locked away. Forever.

Borland returned but drummer John Otto was largely absent for The Unquestionable Truth (Part 1), his stool kept warm by Sammy Siegler – he played with Glassjaw, he’s alright. Eschewing tropes that made them superstars, Bizkit went heavy; Borland’s choppy riffs, the industrial chants and Sam Rivers’ wizardly basslines make The Truth come off as Ministry and Rage Against The Machine trying to cover Tool… but not quite up to that standard. Durst’s cry of ‘fuck it!’ on The Propaganda is basically this record’s mission statement: throw caution and mainstream acceptance to the wind. The Surrender’s subdued fade-out is a bit aimless while The Story and The Channel’s quirkless Rage Against The Machine-isms drag proceedings into more pedestrian territory, but The Unquestionable Truth (Part 1)’s first half is banging.

One of Download Festival 2009’s biggest crowds woke Bizkit from their three-year slumber. Obscenities were shouted, a punter yanked Durst’s trousers down during Break Stuff and everyone had a lovely time. Two years later, the band delivered Gold Cobra: a decent attempt at a comeback. The Unquestionable Truth (Part 1)’s Rage Against The Machine worship is recalled through Shotgun’s call-to-arms ‘Pop! Pop! Pop off the rock ship!’, and that criminally underrated Otto/Rivers rhythm section bubbles below Durst’s dunderheaded delivery, DJ Lethal’s ridiculous ammunition effects and a bizarrely glorious guitar solo. Bring It Back’s heavy as fuck, Shark Attack, Douchebag and Why Try bounce like vintage Bizkit and even though Loser and Autotunage detract from Walking Away’s passable balladry, Gold Cobra was worth the wait.

Taking Three Dollar Bill, Y’all$’s abrasive racket and mollycoddling/expanding it (delete as appropriate to your bitterness), Bizkit transformed into a juggernaut. The Durstisms came thick and fast, our red-capped hero saying “yeah!” and “bab-eh!” instead of rapping, enlisting Method Man to take care of that on N 2 Gether Now. The ‘Realised that I’m worth more than that’ in No Sex is essentially Stacy’s Mom by Fountains Of Wayne but 10 times better, Don’t Go Off Wandering’s got gorgeous strings courtesy of Borland’s brother Scott and the nasty, full-frontal riffing of I’m Broke is an unused gem from Three Dollar Bill, Y’all$. The hits still rule – even a guy in a Darkthrone hoodie knows Break Stuff – and the Jonathan Davis/Scott Weiland guest spots on Nobody Like You have aged gloriously.

Its namesake is a jizzy arsehole but it sold over a million copies in its first week… so, yeah. Chocolate Starfish And The Hot Dog Flavored Water is possibly the most obnoxious rock record ever; the hits keep coming and there’s not a lull until the 13th track, and that’s just because Hold On’s subdued, Weiland-led tones aren’t riposted by a man bouncing around in baggy trousers shouting ‘FUCK! YEAH! ASS!’ This album is ridiculous. Hot Dog into My Generation into Full Nelson, My Way, Rollin’ (Air Raid Vehicle), Livin’ It Up… imagine having the cheek to think that’s acceptable behaviour. Experimentation was traded for songs basically everyone ended up knowing, whether they wanted to or not; so many people pretended to hate Bizkit at this point, stowing away copies of Chocolate Starfish… and doing the Rollin’ dance in private.

It’s not got Chocolate Starfish’s silly swagger or singles, but Three Dollar Bill, Y’all$ makes up for that in sheer fucking venom. Pollution and Leech are the angriest, filthiest ditties Bizkit ever recorded, setting the scene for their Ross Robinson-produced debut. The cover of George Michael’s Faith is goofy, yeah, but it still rocks. Over the album’s duration Sepultura’s Roots is evoked through Otto’s drumming, Borland’s fretwork is at its most unhinged and Lethal’s scratching is, er, lethal. And Durst, man. Before he eventually became the caricature the press painted him as, Durst was a heartbroken, angry young man – just listen to Stalemate. On Indigo Flow and Pollution, you’ve got material actually reminiscent of rapping; he rides Stuck’s lounge/Korn combo as easily as something like My Way would come later. Three Dollar Bill, Y’all$ serves as Durst’s finest vocal showing and, come to think of it, Limp Bizkit’s apex. Before the bullshit, before the overexposure, before everyone pretended to hate them, Limp Bizkit were a brilliant nu metal band churning out raw, primitive music that kicked arse.