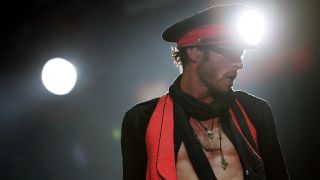 “I guess the problem at the moment is that I have some great things ahead of me and I’m in a band that I’m not getting along with who are junkies and fucking tramps and are trying to pretend they are fucking St. Francis!” Wearing a skinny black suit and Wayfarer shades, he looks like a hybrid of Bob Dylan and John Cooper Clarke – the epitome of grunge chic. Still very raw and emotional from a recent and much-publicised stint in rehab, in this interview – a week before he’s sacked from Velvet Revolver - Scott Weiland speaks openly about the very real highs and lows of being in and out of the band.

What’s your take on the Velvet Revolver situation?

There’s a lot of baggage that comes with the band, and a lot of displaced anger. Y’know, when I first joined Velvet Revolver I already had issues regarding the politics of a rock’n’roll band. When you’re the frontman and the person who writes the majority of the music – all the melodies, all the lyrics – the person who comes up with all the creative ideas – video ideas, concepts for covers, that sort of thing – eventually other band members start looking at you.

From the outside you and those guys getting together looked like two people coming out of horrendous divorces: relating to each other’s experience, but also having the baggage that comes with that experience.

Definitely. But it was almost like coming together off a rebound. At first it was very exciting and we did jive. We had the same common interests. Duff and I shared a lot of the same musical interests with punk rock. Matt and I shared an interest in experimental music. Dave and I had known each other from back in the days of playing clubs in Hollywood. And then you had Slash and I who were – and I don’t want to come over as self-serving – two iconic figures, which the media tried to turn into a Mick/Keef kind of thing. We did have that gang-type camaraderie at first. At the same time, I was in the worst period of my drug addiction I’d ever gone through.

Was Slash messed up too?

Not at that time. He was just drinking a lot. He hadn’t done drugs in a few years. He seemed pretty cool at the time. Duff had been sober for a long time and Matt had been sober for five-and-a-half years. Dave, of course, was as solid as a rock.

So VR was a musical thing that looked like it could be promising but it also looked like it could be a life-raft. These were guys that had walked the same streets that I’d walked and in the same shoes. They were totally supportive and non-judgemental because the first six months was like a process of me getting clean. The first thing to go was the heroin, then the cocaine and then the pills. Then I got into treatment and I got clean. I was clean and sober for two years and then I started drinking. And that all seemed cool for about a year, but then it started escalating.

During that time is when the guys started falling off the wagon. Matt relapsed and went into treatment, then Duff relapsed and went into treatment, and then Slash had his situation. So everybody in the band ended up falling off, except for Dave, of course. At that time I was maintaining my problem in a sane way and I really didn’t fall off intensely until my brother died.

Until then we were covering each other’s backs and then suddenly it all started evaporating. Suddenly these guys who had all fallen apart themselves became extremely judgemental. When they went through their shit I was the last person that would be judgemental after what I had gone through in my life.

The relationship I had with Matt became horrendous. He and I had come close to fist-fights so many times that it’s ridiculous. He has an attitude with lead singers. It’s a problem he had before Revolver – in Guns N’ Roses and The Cult. And, who knows, maybe even before that. Slash and I have always been able to maintain, except on a few occasions, a professional relationship. Duff and I have usually been close. Then everything started to erode. I couldn’t believe I was in this situation where I was getting ostracised by people who had been in the same fucking situation that I was in.

I definitely didn’t want to put Velvet Revolver to bed. I also don’t believe in overstaying your welcome when you are touring a dead album.

We toured our first record [Contraband, 2004] for a long time because it sold three-and-a-half million copies. But when you have an album that didn’t do that well, you don’t tour it for over a year. You take a break; you wait for the songs to happen. Like Keith Richards said: “You don’t fucking labour over songs.”

Right now it’s like a relationship that’s dead in the water, where you need space to figure out if it’s important enough to last. The band need time out to sit back and let the creative juices flow, and also time away to realise what everyone’s part is in why things have gotten to the point that they’re at. Now, I’m not saying that I’m innocent in this, but everybody’s at this place where the fucking finger is getting pointed and they’re all pointing the finger at me. When you think about it, isn’t it ironic that the band is regurgitating the same story that they did with Axl Rose in their last band, where the lead singer was being demonised? Originally I thought: “What a troll he must have been. What an evil man.” But you know what? I have to say that I have an entirely different opinion of him today.

That’s a turnaround. Last year you verbally laid into him in a very public manner.

But y’know what? That was a long time ago and I’d heard a lot of stories. But there are two sides to every story, and having been in this band I actually feel for the guy and understand him a whole lot more.

Is it true that VR’s Australian tour was cancelled because you relapsed and the band and management insisted you went back into rehab before going on the road?

Oh, that’s a bunch of bullshit! There’s absolutely zero truth in that. The band had nothing to do with me going into rehab at all. I never even had a conversation with them about it. I wasn’t even speaking to them at the time. As a matter of fact they didn’t even know that I was going until the night of the show.

Did you do that impulsively?

I was talking to my manager – who is not their manager – and was trying to get a bed at this place. The only person who had an idea that I was going was Matt, cos he went to the same place when the original tour got cancelled. What happened then was I went to dry out for three days at a place my shrink has, because I was drinking a lot. We were supposed to leave for Australia, but Matt came to rehearsals and was so fucked up that the band sent him back to rehab. That’s the reason the first tour of Australia got cancelled. A tour gets cancelled, and regardless of what Matt’s offences were no one pays attention to that because, to be quite honest, no one really gives a shit.

A couple of months later I was saying to my manager: “I can’t believe I’m saying this, but I think I want to go back into rehab again.” I was looking for a place by my house but the prices had changed from five years ago. So Matt directed me to a place in Orange County. It’s fucking ironic that the band says they asked me to go, because I tried to stop the tour earlier and go. So eventually I said: “Fuck it! Book me a bed and after the gig I’m going.” So I packed a bag, did the gig and split off without them even knowing. So the last couple of shows [in the US] we didn’t do. But y’know what? It was more important that I went, because I was in a miserable place. It was the first time in years that I went to a rehab place because I wanted to.

Coming out rehab this time and going straight on tour must have been quite a shock to the system. You must be in quite a raw and vulnerable place.

Yeah, but it’s not like the first time I’ve done it. It’s what my life is, really. But it has changed my philosophy to the concept of what Velvet Revolver is about. With this band everything is about touring. I think by this time we should have made three albums. At least it gives you something a little more thrilling to do while you are touring. Something more challenging than playing It’s So Easy/Sex Type Thing every night.

The initial goal was to tour our albums and not fall back on our old catalogue from our respective past. What ended up happening was exactly the opposite. We ended up falling back on the old material because there’s not enough confidence in what this band is about. I think I have a lot more to say musically.

There have been rumours on the net that during the last shows you’re going to destroy the stage or just split prematurely.

Oh, I can’t do that, because the management have threatened to arrest me. How do you figure that one? What is this, a fucking Mormon Tabernacle Choir?!

Wouldn’t an alternative to this heated situation be that you all cool off, do your separate projects and then regroup and see how the land lies?

I think they should get Guns N’ Roses back together, to tell you the truth. I think that would be the greatest thing that they could do. I think the world would be very happy. If they could stop talking trash about Axl in the press. It almost happened. The pens were ready to sign. With the Greatest Hits there was a possibility but there was too much stuff being said. But it was a close call. I would love to see that happen, as a Guns N’ Roses fan. I’d pay to see it.