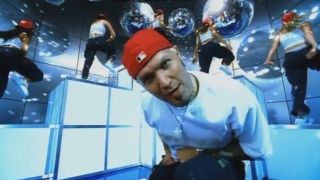 At the turn of the century, Limp Bizkit burned their way through some serious cheddar in the pursuit of making some truly memorable videos. Their promos had it all: Hollywood stars, iconic locations, appearances by rap royalty and massive insects. So it’s no wonder that between 1998 and 2002 you couldn’t turn your TV on without seeing Fred Durst’s shouting down the camera lens.

Here then, are the 10 best videos from one of nu metal’s most outlandish bands…

Limp Bizkit have always made a point of including their fans in many of their videos. In the case of My Generation, there’s literally thousands of them as they cause a near-riot at one of their sold-out shows. The video – which is a nice snapshot of the hysteria surrounding the band at their peak – also incorporates some trippy effects as they perform on a Plexiglas® stage, which wouldn’t have been cheap. Look out for the clip of Durst jumping from a cage into a crowd as though he was in a nu metal version of Roadhouse. What we want to know is, when did gigs stop being this batshit crazy?

Using footage shot on the infamous Family Values tour 1998, this is Limp Bizkit at their most riotous. While there’s nothing out of the ordinary about this video other than Korn turning up for a backstage party – much of the performance aspect of the clip was shot between two tourbuses – it’s still cool to look back at a world where nu metal was king and baggy jeans were acceptable.

A mishmash of footage of Limp Bizkit on tour – both backstage and onstage – it’s a side of the band we don’t see much these days. Long gone is the OTT bravado and larger-than-life attitude, this is actually what it’s like to be in one of 2000’s biggest bands in 2013. There’s a weird subplot between a man and two women sexualising garden tools, but if we’re honest, the highlight is still Fred Durst rapping while having a poo. Also, why didn’t Lil Wayne take the tag off his cap? It looks daft. Must be all that sizzurp.

While this is not the wildest or most stylistic video in this list, it’s a glimpse into the psyche of Fred Durst at the turn of the century. It’s a simple vision of Durst wants most in the world – to be followed down the street by attractive women before starting a riot with his band as they play a song about humping. It’s probably the reason why so many hormonal teens became Bizkit devotees. Typically, the band don’t have a permit for this live performance and end up getting arrested. Badass.

This 1997 video is notable for the fact it features a young Wes Borland in a corset – what more to you need to know? After being teased by some bigger boys, a teenager decides it’s time to cut off his spiky blond hair with some blunt scissors and transform into what he always knew he was – a freaky bug monster from Goosebumps. Of course, his jaded parents don’t care, barely paying their son any attention as he stands on the dinner table cramming food into his mandibles. America was weird in the late 90s.

It’s a bit of a rookie mistake of Ben Stiller to give the dodgiest looking guy on the street his car keys, but that’s movie stars for you. Although the joyride is just one facet of the three pronged attack Rollin’ delivers. There’s also the late-night gig on top of the World Trade Center and the neon blue room filled with sexy female dancers wearing baggy clothes and red caps. The real star of the clip is famed street dancer Mr Wiggles who bodypops the rest of the band off the screen. The band picked up an MTV Video Award for ‘Best Rock Video’ five days before the 9⁄11 terrorist attacks. “After 9⁄11, everyone stopped playing it. Nobody wanted to see it – neither did we,” Borland told FHM.

Probably Bizkit’s artiest video and, as a result, one that doesn’t make a whole lot of sense. There’s exploding girlfriends. Wes Borland’s head falls off. Fred legs it from a giant man made of hotdogs. There’s probably a metaphor buried somewhere in the script but we’re still none the wiser. As Fred finds himself in a weird sex room full of wigged women, they ramp up the weirdness even further as he turns into a cartoon and is surrounded by those creepy dudes from the Chocolate Starfish album sleeve. It’s nonsensical and a little bit obnoxious – precisely what you’d expect from Limp Bizkit. Fun fact: the video was shot in Portugal.

3. Take A Look Around

This video has an even higher production value than Rollin’ as it’s a spin-off from Mission Impossible 2. In keeping with the spy thriller theme, Take A Look Around tells the story of Bizkit trying to steal a briefcase from a pair of secret agents – because if you want to avoid an international incident, you call on Mr Red Cap. Again, Wes steals the show, this time by going undercover as a waitress, albeit with a goatee. Of course, the secret agents couldn’t look any more secret agent-y so we’re not sure just how true to life this adaptation is. What we do know, however, is that if you’re looking to take down a mysterious organisation in a diner then putting a gallon of hot sauce in their soup is definitely the way to go.

By the time Limp Bizkit released this definitive anthem as a single in 2000, it was clear that they could do whatever they wanted. A queue of Bizkit fans get their moment in the sun – just like that Feeder video for Just A Day but not as cheap – before a ton of Durst’s famous mates turn up. Snoop Dogg, Dr Dre and Eminem show their faces, mime to the song before nu metal royalty Jonathan Davis pops up to have some sort of showdown with Fred before that break. There’s baggy trousers, skateboards and chain wallets, if you needed reminding this was the year 2000.

Showing blatant disregard for the rules of video making, here’s a video about making a video – how (nu) meta! What starts with Wes and Fred discussing the video’s theme becomes one long montage of different scenes including real-life version of The Flintstones. There’s so much to look out for in this clip – usually stemming from Wes’ obvious apathy about the whole thing – except when he’s angrily throwing polystyrene boulders at his bandmates, before being crushed by one himself. C’est la vie.