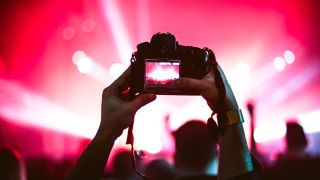 Although many professional music photographers use top-end camera kit, most didn’t start out that way – they used something a little less expensive in the beginning, which is where our round-up of the best cheap cameras come in.

If you can afford one of the models in our best cameras list then go for it, but there are some great alternatives further down the camera brands’ line-ups, or that have been around a while so are now cheaper to buy.

With that in mind, we’ve put together a list of the best cheap cameras that will put you on the road to taking awesome images of bands in action. These budget cameras can also be drafted in to document your everyday life, travels and more.

Choosing the best cheap camera for you

Buying the latest top-end camera usually ensures you get the latest technology, but it doesn’t always mean you get better image quality than from an older or cheaper camera. It usually just makes the job a bit easier or pushes the boundaries further.

There are plenty of cameras lower down the pecking order or that have been on sale for a little longer that still deliver superb images. It may mean that you don’t have the latest in autofocus technology or the fastest continuous shooting rate, but the images are still very good for the price tag.

All of the models listed in our best cheap cameras guide are still available new, and there’s a mixture of DSLR cameras and mirrorless cameras too. That means they all be used with different lenses, making them more versatile than a fixed-lens camera. Whichever camera you opt for, it’s important to factor in the price of a decent lens and that you buy one that has the right mount.

The Nikon D7500, for example, is a DSLR camera with a Nikon F-mount. Nikon makes a huge range of lenses with this mount, but you can also buy third-party optics with the mount. Ready to discover which is the best cheap camera for you, whether you’re shooting live music or something else entirely? Then let’s dive in…

The Nikon D7500 is made it into our top cameras list but, as it retails for under £769/$988, it also deserves the No 1 spot in our best cheap cameras list. This DSLR camera’s strengths are its impressive 51-point auto focus (AF) system and high-quality sensor, which combine to deliver superb images with plenty of detail.

As it’s a DSLR, the D7500 has an optical viewfinder and this is the best means of composing images on it as the autofocus system it uses in live view mode (when images are composed on the screen on the back of the camera) is slow in low light.

The best cheap camera for those who want a mirrorless design

The Sony A6400’s autofocus system has 850 AF points that cover approximately 84% of the sensor so that you can track subjects close to the edges of the frame. It also has Real-time Eye AF, which means it automatically detects and focuses on eyes in the scene. That’s perfect for capturing images with people (think bands) in the frame.

The snappy AF performance is backed up by 11fps shooting for up to 99 jpegs in the best quality setting. Image noise is also controlled well up to around ISO 32,000, which is great news for low-light shooting at gigs.

Capture fast-paced action during gigs and other live events

The Canon 77D’s viewfinder-based AF system is quite sensitive for a camera that has a smaller price tag, which means it performs well in dim lighting. And although you can’t shoot 4K video, the Full-HD results are very good, which is why it’s here in our best cheap cameras guide.

Helpfully, the 3.2-inch 1,040,000-dot screen is on a vary-angle hinge, and though there’s a healthy collection of buttons and dials, Canon makes good use of its touch-sensitivity. That means you can adjust settings quickly and easily on the fly during gigs and other fast-paced situations. It also makes the camera that little bit more intuitive to use.

As you’d expect from any camera in this list, the image quality does not disappoint.

The best cheap camera for anyone wanting a more compact design

Prime
£799
View at Amazon
£839.99
View at very.co.uk
£849
View at John Lewis
See all prices (40 found)
169 Amazon customer reviews
☆☆☆☆☆
Ace image quality straight from the camera
Great build quality and control
Badly placed Quick menu button
Some of the buttons are fiddly to use

We love the Fujifilm X-T3, but it’s too pricey to make this list. However, the Fuji X-T30 has the same 26.1MP sensor and processing engine, so it can produce identical quality images.

It also has a similar exposure control arrangement with shutter speed and exposure compensation dials, plus it’s compatible with Fuji’s lens with an aperture ring.

Fujifilm’s Film Simulation modes are also available to make jpegs look great straight from the camera. The X-T30 is also a tad smaller than the X-T3, which makes it easier to stash in your backpack in between use.

The ideal budget camera for beginners to learn on

The D3500 is Nikon’s entry-level DSLR which means its spec list isn’t the longest or most impressive but it delivers where it counts as it has an excellent sensor and a capable image processing engine – and all for under £350/$500.

It also has a great Guide Mode that teaches you about photography and how to use the camera controls in simple, non-techy terms.

Naturally, there are a few compromises to be made for this price, for example, the AF system which while very capable, has just 11 points and the maximum shooting rate is 5 frames per second. But with care, it still delivers very high quality images.

Prime
£479
View at Amazon
£509.99
View at very.co.uk
£579
View at Currys PC World
See all prices (21 found)
15 Amazon customer reviews
☆☆☆☆☆
Small size for a DSLR
Excellent touch control system
Just 9 AF points
Not as robust-feeling as others in this list

Known as the Canon EOS Rebel SL3 in the US and the EOS 250D in the UK, this is the smallest DSLR around with a vari-angle touchscreen. It also has a great combination of physical and touch-controls which makes it intuitive to use.

Although the AF system only has 9 points so you may need to crop your images a little to get the perfect composition, it’s very fast and does a great job of keeping moving subjects sharp.

A decent cheap camera for keeping track of moving subjects

It seems like the Sony A6000 has been around forever, but it’s also one of the company’s most popular cameras. And it’s easy to see why. It’s nice and small yet has both an electronic viewfinder and a 3-inch 921,000-dot tilting screen, plus its 24MP sensor captures plenty of detail and the 179-point AF system does a great job of tracking moving subjects.

However, it’s age is showing a little, and we’d recommend keeping to ISO 3,200 or lower to avoid noise becoming obvious in your images.

The OM-D E-M10 Mark III has some great features such as Live Bulb, Live Time and Live Composite mode which make it really easy to shoot long exposures, 4K video capability, a great range of Art Filters and a 121-point AF system. It also has a decent viewfinder built-in along with a tilting touchscreen.

Being a Micro Four Thirds camera means it’s compatible with a wide range of lenses from Olympus and Panasonic as well as some third-party manufacturers. And while its small size means it’s not a natural pairing with long lenses, it’s manageable.

The D5600 sits above the D3500 but below the D7500 in the Nikon DSLR line-up. It adds a vari-angle touchscreen to the D3500 package, but doesn’t have the excellent Guide mode that helps you learn about photography.

When you’re shooting using the viewfinder to compose images, the D5600’s 39-point AF system is snappy and accurate. Switch to composing images on the vari-angle screen however, and things slow down as the live view system doesn’t cope well with low light or low contrast, but most music photographers tend to shoot with a viewfinder anyway.

If stabilisation matters most to you, this is the shooter you need

If you’re looking for a compact, discreet camera, the Panasonic Lumix GX9 could be just the thing. Unusually, it has a viewfinder that can be tilted up for easier viewing from above, while the 3-inch 1,240,000-dot touch screen tilts up or down.

Despite its small size, the GX9 has an exposure compensation dial so you can adjust the brightness of images very quickly. Panasonic’s 4K Photo modes are also on board to make it really easy to capture split-second moments, but bear in mind they are captured at 8MP rather than the full 20MP resolution.

Gimbals turn your smartphone into professional video cameras, by removing the shaky, jerky movements you get from just handheld use. This one has a mechanical stabilizer on 3-Axis points that compensate when they detect unintentional movement, meaning you can move and zoom and still deliver smooth, pro-quality video. This one from Hohem is Amazon's #1 best seller and is now a whopping 64% off. View Deal