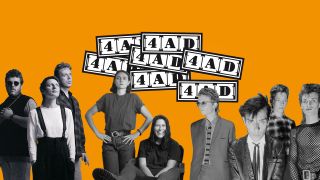 Once mocked as being the home of po-faced goth and hifalutin airs and graces, 4AD has survived as a national treasure and an international measure of class.

Arguably as influential as any classic indie label – only Rough Trade, Mute and the deceased Factory match its status as a brand name – 4AD began, fittingly, in 1980, heralding a new decade. Punk had shaken things up; now we were receptive to new ideas. Adventurous artiness was welcome as long as you remembered not to call it prog.

Beggars Banquet allowed co-founders Ivo Watts-Russell and Peter Kent to launch the 4AD imprint with a budget of two grand. The name – adapted from a flyer saying 1980 Forward – meant nothing. Now, of course, it means plenty.

Bauhaus got the dreams and dark entries rolling, but the association with goth was accidental. Ivo’s “light-bulb moment” had been seeing Jimi Hendrix on Top Of The Pops. After getting into Pink Floyd, Cream, and Caravan he felt he had “found [his] purpose”. “At that point in my life I was convinced the counter-culture was going to change the entire universe”, he told me. Vaughan Oliver and 23 Envelope’s artwork captured a generation’s imagination as effectively as Roger Dean’s had in a previous decade.

“Don’t go waving your pretentious love”, advised Bauhaus in 1980. “It’s a terrible love and I’m walking with spiders”, explained The National in 2010. On 4AD, there has been every kind of love. The label has carried us head over heels through four decades, from the archetypal Cocteau Twins single Pearly-Dewdrops’ Drops to the atypical Pump Up The Volume from MARRS, through the US-infused phase of Pixies' Gigantic and an uneasy realignment period after Ivo’s departure, to its current robust and bright-eyed 21st century condition.

Here are a dozen delights to join the dots of its constellation.

“We were original”, Bauhaus vocalist Peter Murphy told me a few years ago. “And we were beautiful”.

Acknowledged as one of the templates of gothic music, with its dominant moods of drama and despair, Bauhaus' debut album also thrives on the quartet’s love of glam mannerisms and the fertile new ground of post-punk, with punk having temporarily run out of steam.

One wishes they’d included nine-minute single Bela Lugosi’s Dead, but this scratchy, eerie, self-produced primal dream, dismissed as “meaningless” upon release, reconstructed the rules of rock. And as 4AD’s first album, was a divining rod for a new decade’s diversity. View Deal

When Melbourne band The Boys Next Door changed their name and moved to London, they weren’t impressed by “the English New Wave pop groups”. They had a firecracker to throw, and their Australia-recorded debut caught some of their feral live energy, often a Jackson Pollock-ish riot of noise, scares, surrealism, and Nick Cave’s as yet unseasoned pervy poetry.

While time has shown that Cave had a more thoughtful talent, the bird’s-nest hair and skinny legs of all concerned added to the early general sense that 4AD was gutter glamour for pouting goths.View Deal

This was where popular perception shifted: Planet 4AD was now inhabited by “ethereal” (this is where that journalistic cliche got its patent) women in floaty white dresses being fey in – yes – “sonic cathedrals”.

The Baudelaire-quoting Dead Can Dance and the high-of-voice and enigmatic-of-photo Le Mystere De Voix Bulgares confirmed the myth. The Cocteaus, though, were for some years the big beast of the growing and critically-adored label (which they’d approached after following Bauhaus and The Birthday Party around on tour as shy teenagers).

Their third album – the first where Scottish savants Elizabeth Fraser and Robin Guthrie were joined by Simon Raymonde – remains unloved by its makers, who thought it rushed and unfinished. Yet to the thousands falling in love with its unique voice, endless guitars and doo-lally lyrics, its ebbs, flows and magical melodies were, as Melody Maker put it at the time, “the voice of God”.View Deal

Germany wasn’t too interested in Hamburg’s female-led angst-rock pioneers, but after they toured the UK supporting Cocteau Twins, 4AD saw the light in their mysterious shadows.

Ice and fire and a rare purity: the most underrated Teutonic band of all time.View Deal

Emboldened by his label’s plaudits, Ivo Watts-Russell began a studio collective to realise his own aural dreams. “Fuelled by imagination”, he told me. “Never a 'house band'. My role was like a film director.”

On TMC’s first, It’ll End In Tears, the likes of Howard Devoto and Elizabeth Fraser interpreted such favourites of his as Big Star and Tim Buckley (famously, the latter’s Song To The Siren). Even plusher was their second release – a double – with such fine ears as Simon Raymonde (“Ivo had exquisite taste”) and under-appreciated singers like the Rutkowski sisters and Dominic Appleton reimagining Judy Collins, Van Morrison and Talking Heads.

Foghorns and helicopters were dropped in: it made nouveau-noir sense. Moments of majesty herein would make even a statue weep.View Deal

All change. 1987’s Pump Up The Volume by MARRS, an unanticipated monster club smash, had already broken the goalposts. In 1988, Ivo and I travelled to Boston, where in a seedy basement bar called The Rat Club we saw two local bands: Throwing Muses and support act Pixies.

These had just become 4AD’s first American signings, despite Ivo’s initial misgivings that the latter were too “normal”, too “rock'n'roll”. Persuaded by his then-girlfriend that they were viable, he took a gamble.

Suddenly, 4AD was no longer all about ethereal women in floaty white dresses, and now shared responsibility for revitalising the shouty rock genre, unwittingly birthing grunge and Nirvana. Fans will argue over whether ‘88’s Steve Albini-produced Surfer Rosa or this album are the one, but this gold-selling monkey undeniably went to heaven.View Deal

For many, the true star of Pixies wasn’t frontman Charles "Black" Francis, but mischievous bassist-vocalist Kim Deal. Although tensions within Pixies were high, Deal didn’t actually leave the band by the time she turned her attention to The Breeders – but this new side project indicated her wish to explore her own musical voice.

Also up for a liberating extracurricular spin was Tanya Donelly of Throwing Muses. Their Albini-produced debut, Pod, was raw, spontaneous and lyrically twisted, with Deal switching to guitar and aiming for “The Bangles from Hell”.

Recorded in a week, counter-intuitive cover of The Beatles’ Happiness Is A Warm Gun and all, Pod is now routinely hailed as one of the 90s’ most influential records.View Deal

While their startling, sublime 1986 debut was a watershed 4AD moment (Americans! Women rocking with guitars!), their fourth found a way of making the Muses’ jagged, circuitous songs ring with pop-friendly chops without sacrificing smarts or emotional intensity.

A perfect balance was found, bordering on college rock, and those who’d found them too “cerebral” were converted to Kristin Hersh’s vehemence. It was a swan song, too, to their first phase, with Tanya Donelly afterwards leaving her inspired half-sister’s band to form Belly. Even a band as blazing as brightly this could only host so much talent for so long.View Deal

Donelly chose her new band’s name as she thought the word “both pretty and ugly”. Even those who knew her writing ability didn’t expect their debut to take off quite like it did.

With Feed The Tree a huge hit, and Gepetto and Slow Dog equally light-footed pop-rock gems, Belly got two Grammy nominations, joint-headlined a US tour with Radiohead, and dazzled like Donelly’s grin. Follow-up King couldn’t match it and, being darker, didn’t want to, though it did see this 4AD queen on the cover of Rolling Stone before she pulled the plug on the band – until a more-relaxed reunion in recent years.View Deal

After Ivo sold his share in 4AD back to Beggars (and moved to New Mexico) just before the turn of the century, the label took some time to find its focus, flailing for a while. Around the middle of the 2000s it rediscovered its stride, with acclaimed successes from the likes of Bon Iver and TV On The Radio.

Possibly the biggest coup was the first Scott Walker studio album in eleven years, and only his third since The Walker Brothers’ closure of 1978. Avant-garde and complex to an unsettling degree, with sudden blasts of noise and musings on torture and disease, it’s one of the great “unconventional artist” music-as-Marmite albums. And therefore 4AD was, still, the perfect fit.View Deal

Few bands have restored credibility to the 4AD name this decade quire like the articulate, Obama-endorsed, alt.rock five-piece The National.

Their unlikely rise to near-world domination has been steady and sure, each album’s subtle musical surges and whirlwinds of wordplay winning new fans. By this fifth album, which made the top three in America, their murmuring swell of Leonard Cohen-goes-epic-indie was becoming Brooklyn’s biggest buzz.

“A lot of it wallows in self-pity”, singer Matt Berninger told me, “but don’t worry about it. Swans will keep swimming, and we’ll all be fine”.View Deal

Proof that 4AD is thriving in rude health has also been provided in recent years by artists as diverse as St. Vincent, Grimes, Deerhunter, Ariel Pink and Future Islands.

Young sibling art-rockers Lemon Twigs from Long Island have brought the glam, and no lack of ambition, as their second album – a concept rock-opera about the trials a monkey experiences upon enlisting at a human school – attests.

Todd Rundgren plays one of the chimp’s adoptive parents as Sparks tussle with Wings in Meat Loaf’s garage. Recorded in their parents’ basement, it’s creepily inspired.

Original? Beautiful? 4AD has its energy back as the place where the different meets the timeless meets the right now.View Deal