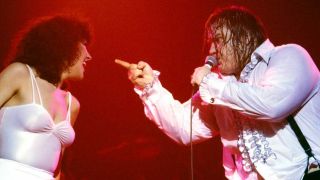 Lest we forget, Meat Loaf is 50% responsible for 1977’s Bat Out of Hell, one of the best-selling rock records of all time and truly one of the greatest. Along with songwriting partner Jim Steinman, the man-named-Meat created an unlikely but unforgettable act, going for it with such full-throttle velocity that he often needed to suck on a tank full of oxygen just to get through the show.

Meat has had many highs and lows in his five-decade career, but that’s the guy I would like you to remember, the bellowing, sopping-wet, wheezing, horny man-mountain who carved his own bombastic scarf-rock niche into the culture and made rock’n’roll even bigger and weirder in the process. To that end, let’s take a look at the wild world of Meat Loaf albums and while we may wince here and there, let’s also give the guy who sang Bat Outta Hell his due. Just in time for the release of Meat Loaf’s 13th album, Braver Than We Are, here’s your handy guide to studio Meat, ranked worst-to-best…

Let’s just get this mess out of the way first. While it is being touted as Meat’s first Steinman-dominated album in a decade, it should be noted that most of it is decades-old scraps from abandoned musicals, as well as songs previously flopped by Bonnie Tyler and Sisters of Mercy. Compounding the tired material is Meat’s increasingly weak voice, currently a squeaky shadow of its former grandeur. It’s bad, man. Of course, everybody’s still on Meat’s side, blah-blah-blah, but if you get through it all in one sitting you are definitely braver than I am.

At the time Meat was making this record, he was the belligerent star of Celebrity Apprentice and during the course of that season he recorded a charity single with some of his “all-star” teammates, Sugar Ray’s Mark McGrath, country singer John Rich (Big & Rich) and rapper Lil’ Jon. It’s featured here. It’s called Sand in the Storm and it’s a terrible mish-mash of clashing styles. Elsewhere Public Enemy’s Chuck D shows up for a rap cameo, and Meat butchers California Dreamin’ for what seems like an hour. None of this would even be that bad if his voice held up, but he was already struggling to hit notes. And with no Steinman on deck, Meat utilizes a handful of songwriters who have no idea what do with him. Just a mess.

Desperate to find some niche to survive the 80’s, an on-the-ropes Meat teamed up with Milli Vanilli producer Frank Farian to create a pastel-coloured collection of synth blasts and funky bass pops. Oof.

Wherein Meat goes it alone, eschewing any Steinman songs completely and employing a handful of writers (including Nikki Sixx) to create tepid soundalikes. Meat was riding high on sold-out greatest hits tours at this point and wanted to create some new classics to add to the repertoire. It did not happen here.

Another album created during a rift between Meat and Steinman, Midnight features a crack studio band that included Rick Derringer and Skynyrd guitarist Gary Rossington, but the songs (many co-written by Meat himself) are weak and lack the pomp and circumstance of classic Meat Loaf. To make matters worse, two of the songs Steinman originally slated for the album and sold to other performers became massive hits. Both Air Supply’s Making Love (Out of Nothing at All) and Bonnie Tyler’s Total Eclipse of the Heart would have been on Midnight had the fellas not been feuding.

Two years after the massive success of Bat II, Meat offered up this relationship-gone-awry concept record, and while it failed to produce any real hits of note, it went platinum anyway. Seven-minute single I’d Lie For You (And That’s the Truth) is primo to-the-limits Loaf, but a lot of the album is otherwise forgettable.

Created during the relentless glam metal wave of the mid-80s, this is meat’s hardest-rocking album. Featuring guitars by Bruce Kulick (Kiss) and a duet with Roger Daltrey on the title track, Bad Attitude was Meat’s attempt to keep up with the kids. And for the most part, he did.

Proof that pre-Steinman Meat was just as theatrical and pleasantly overblown as post, this minor gem was concocted while Meat and Shaun “Stoney” Murphy were both cast members in hippie musical Hair. Signed to Motown’s short-lived rock subsidiary Rare Earth Records, S&M is very much in line with Motown’s vision, a frothy stew of brass and thunder, full bluesy R&B and sexed-up gospel-rock. The highlight, in title alone even, is opener (I’d Love to Be) As Heavy As Jesus, which has to be the most Meat Loaf-y phrase of all time. The album was re-released with a shuffled tracklist and the ugliest cover imaginable in ’78 to capitalise on Meat’s ascent.

The title is sorta disingenuous. Steinman and Meat were in a legal battle over ownership of the BOH phrase, so Steinman relinquished production to the slightly less bombastic Desmond Child. Most of the songs were written by Steinman, but not as a continuation of the Bat theme (whatever that is). Still, it’s a solid collection of Meat-jams with another monster power-ballad (It’s All Coming Back to Me Know) and a zingy metallic opener, The Monster Is Loose, written by Nikki Sixx and John 5.

In 1980, Meat was nursing his tour-ruined vocal cords and starring in low-budget comedy Roadie. His partner, Jim Steinman, recorded Bad for Good, the follow-up to Bat, without him. But while working on that album, he wrote this one. When Meat’s voice kicked back in, he bashed out this fine return-to-form. More low-key and less concept-y than Bat, it nonetheless satisfies the itch for epic, Wagnerian rock’n’roll and is anchored by three strong singles, Read ‘Em And Weep, I’m Gonna Lover Her For The Both Of Us, and the title track, a duet with Cher. Like a lot of his non-Bat albums, this one got sorta lost in the shuffle, but it’s one of his best.

Another concept album. Each song on the album represents the dreams of a wounded soldier. Or something like that. Meat really went all-in on this one. No Steinman but instead of hiring murky background songwriters, Meat hired high-impact types like Justin Hawkins, Jon Bon Jovi, Desmond Child, and Foxy Shazam’s Eric Nally and peppered the album with cameos from Brian May, Steve Vai, and Jack Black, among others. The result is a flash-fire of fevered visions colliding in an audacious, ramshackle, wonderfully ridiculous collection of bombastic theatre-rock that really needs to be heard to be believed. This might be Meat’s most ambitious – and most over-the-top – album. And obviously, that’s saying something.

If the success of Bat seemed unlikely in ’77, what hope (in hell) would Bat II have during the height of “alt-rock”? The last thing anybody in 1993 wanted was to hear some bullshit album from creaky old dinosaurs like Meat and Steinman. And yet, seemingly out of nowhere, the constantly feuding duo pulled it together and created their second-greatest album, a collection of truly breathtaking rock’n’roll grandeur including the most beautifully absurd and almost grotesquely over-inflated power-ballad perhaps of all time, I’d Do Anything for Love (But I won’t Do That). The rest of the album is just as nuts. What a comeback.