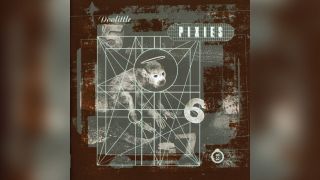 Black Francis still remembers that early spring of 1990 when he realised The Pixies had finally arrived. “I was driving my Cadillac, with my girlfriend, across Texas, quite near the Mexican border,” he says. “At three in the morning I was pulled over by the Border Police. There were six of them and I had this giant yellow car with out-of-state plates. I hadn’t been to Mexico, but I’d bought a couple of piñatas [colourful containers filled with small toys and/or candy] in Boston for my young cousins, but had forgotten to give them to them. And there they were in the top of my trunk, with ‘Mexico’ written incriminatingly across them. I also had a little marijuana stuck in a guitar in the trunk. I was thinking: ‘Oh shit!’

“These guys were questioning me, getting ready to take this car apart. Then finally the leader said: ‘Hey, haven’t I seen you on MTV?’ I said: ‘Yes you have, officer. I’m in a band called The Pixies.’ Somehow he’d seen our video and recognised me. Then suddenly out come the Polaroid cameras for me to pose for them, with me literally holding a shotgun. They were shaking hands like I was a big star. Then they let me go on my way. It was a close thing. You really don’t want to get arrested in Texas for marijuana possession.”

The video the patrolman had seen on MTV was most likely for Monkey Gone To Heaven, or perhaps Here Comes Your Man, the two singles released from The Pixies’ second full-length album, Doolittle. That record wasn’t just a turning point for the Boston band – songwriter/frontman Francis, guitarist Joey Santiago, bassist Kim Deal and drummer David Lovering – but, it transpired, also the whole of so-called ‘alternative’ American rock.

Before The Pixies came Black Flag, The Minutemen, Hüsker Dü and The Replacements, all intermittently brilliant bands who bucked the major-label monopoly of the 80s by mapping their own chaotic, punkish path through the US underground scene. None of them, of course, made any money.

The Pixies were different. They didn’t get rich either (“The big cheques only started arriving after the band had broken up,” laments Francis), but it they did make the mainstream. Doolittle made an unexpected dent in the US Top 100, selling a steady 100,000 copies in its first six months in 1989, and reached the dizzy heights of No.8 in the UK. This was significant for a band whose USP was all sheet-metal riffs, tart choruses, weird anti-harmonies, and a singer who seemed to vomit vocals rather than merely sing them. Added to the lyrics – strange tales of Biblical death, God, environmental collapse, sliced eyeballs and suicidal Japanese businessmen – it really did seem like anything was possible.

Perhaps most far-reaching of all was a quiet/loud dynamic that fed directly into the prevalent tropes of 90s rock. After The Pixies came Nirvana (and, by association, Hole and Foo Fighters), Pearl Jam, Stone Temple Pilots, Weezer and, back here in Blighty, PJ Harvey and Radiohead. Thom Yorke has called The Pixies “the greatest band ever”, while it’s not over-fanciful to suggest that Nirvana would never have existed without them. When Kurt Cobain told Rolling Stone about recording the multimillion-selling Smells Like Teen Spirit, he was gracious enough to say: “I was basically trying to rip off The Pixies. I have to admit it. When I heard The Pixies for the first time, I connected with that band so heavily I should have been in that band.”

Twenty years after The Pixies first split, Francis is now philosophical about it all, “To put it in perspective, we were a quirky band,” he says. People always say we must have sold a lot of records, but we had that video on MTV for six weeks and sold an additional 60,000 records. The nineties hadn’t really happened yet, where so-called ‘alternative’ bands were selling millions of records. We were selling a few hundred thousand, maximum, but we were impressed at the time. Suddenly we were out of our day jobs and flushed for cash. It was fantastic. But we were still some scrappy indie rock band. We weren’t like all those bands that came after.”

The Pixies’ corrosive brand of post-punk was forged in the clubs of Boston, Massachusetts, where they’d formed in 1986 and where Santiago and Francis (real name Charles Thompson IV) had shared digs at university. Their mini-LP Come On Pilgrim followed a year later. Then in ’88 came the metallic screech of the Steve Albini-produced Surfer Rosa. British music weeklies Melody Maker and Sounds both voted it their album of the year.

When the time came to make the next record, Doolittle, there was more money in the coffers of record label 4AD, and a major deal with Elektra in the US. Again, Albini was floated as producer, but the band wanted something else. “Steve Albini had been presented to us by the record company,” recalls Francis. “But he had all these bohemian ideals. He called himself an engineer. At the time, people of that ilk equated production with selling out and being mainstream. So when they suggested Gil Norton – someone who was British and an actual record producer – we were pretty agreeable.”

Norton’s spit-’n’-polish approach set things under a harsh light, accentuating the simple complexities of songs like Debaser, Wave Of Mutilation and Mr Grieves. He had to compromise, though.

“A lot of the arrangements were pretty short, and Gil suggested we lengthen them,” says Francis. “So, according to Gil, I went out, picked up a Buddy Holly record and played him one of the songs, which was about a minute and fourteen seconds. I said: ‘Gil, there you go. It doesn’t get any more classic than this rock’n’roll right here. Look how short these arrangements are.’ He decided not to fight me on that point. Then I was happy to let him lead everything else. The sound he got was more cold and icy rather than fat and messy. To my ears it was more exotic. We were without vision, and I think Gil made things a little crisper, more statuesque.”

Santiago, whose riffs give Doolittle a raw, buzzing intensity, also had a small issue with Norton: “I was a little concerned about there being too much reverb on the guitars. One day Gil came in and I’d covered my Marshall cabinets with blankets, just to make sure the point was taken.”

Then there were the songs themselves. The terse Debaser was Francis’s imaginary soundtrack to a favourite film, Luis Buñuel’s surrealist 1929 short Un Chien Andalou. Dead and Gouge Away alluded to the Biblical tales of David and Bathsheba and Samson and Delilah. Wave Of Mutilation plots the decline of failed Oriental businessmen driving headlong into the ocean. Monkey Gone To Heaven hints at impending ecological disaster.

Others, like Crackity Jones, were inspired by a more directly personal experience. “At college I’d moved into the men’s dormitory at the University of Puerto Rico at San Juan and my allocated room-mate never showed up,” explains Francis. “Then suddenly he was there one day, like a scene from a film. He was standing in the doorway, completely silent, holding his hand out. There was blood on his fingers. Then in Spanish he said to me: ‘I cut myself.’ It just got weirder from there. The guy had some mental health issues, voices in the head and things like that. Crackity Jones is about him.”

Lovering’s strongest memory is of recording La La Love You, for which he took the vocal mic for the first time: “That was a pretty big thing for me. I had to work my ass off to get it right because that’s tough to sing. It took me a lot of drinks to get over doing it, so in the studio I was knocking a lot of vodka back beforehand. I remember when I was in the booth getting the whole thing down, I was clapping like a fool and having a great time, which I think you can hear on the final version.”

When Doolittle was released in April 1989, the critics loved it. It was a record that provided some affirmation for choosing life in a rock’n’roll band. “I originally tried to be an architect,” says Santiago, “so it certainly validated the career my parents didn’t think I had. When they first saw me on MTV, they went: ‘Ah, okay. You’re not just playing shitty nightclubs!’”

Lovering remembers an unusual day spent in the company of admirer Kurt Cobain some time later: “I met Kurt once, when he and his wife Courtney came to a theme park with me at Six Flags, just outside Los Angeles. We went there in late January, on Super Bowl Sunday, and nobody else was there. Kurt was walking around in his pyjama bottoms. He didn’t talk much, but he did say: ‘You guys are such a great band.’ We were walking around there and some kid came up and said: ‘Oh my God, that’s Dave Lovering from the Pixies!’ And Kurt’s standing there and nobody said a word to him.”

Fast forward to today, and the Pixies are back together, playing sell-out shows in Europe and the US. Kim Deal, already juggling the Breeders reunion, quit in May 2013. A magnanimous press statement from Francis, Santiago and Lovering stated: “We will always consider her a member of the Pixies.”

Deal’s replacement was Kim Shattuck, formerly of The Pandoras and, since 1991, singer-guitarist with The Muffs. The first new Pixies record since 2004, the Gil Norton-produced Indie Cindy, landed in 2014. As if to bring a sense of circular narrative to their return, the lyrics of the song were partly written in exactly the same Starbucks outlet (Harvard Square in Cambridge) as those of 1988’s Break My Body a quarter-century earlier. More fresh material has since arrived in the form of 2016 album Head Carrier, although without Shattuck, who was fired in late 2014.

A key part of the Pixies’ enduring appeal, it seems, lies in their very elusiveness. It’s a point that’s echoed in Doolittle itself.

“No one ever had a clear idea of what the Pixies were about or what we stood for,” concludes Francis. “During Doolittle, for example, there was the fact that Kim Deal and I weren’t getting along. It was a truth, but it wasn’t like it was this giant black cloud looming over everything. But it’s painted like that over and over again, because nobody really knew what to do or say about us. People would look at the dead monkey on the album cover and decide we were environmentalists. Everyone was searching for some kind of story. There is a story, but it’s not a particularly nice one. It’s not a People magazine story. It’s more real than that.”

This article originally appeared in issue 196 of Classic Rock magazine.