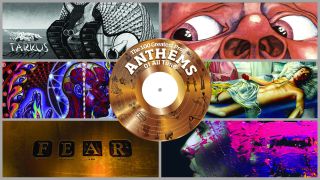 What are the greatest prog songs of all time?

What are the greatest prog 'songs' of all time? What is a song anyway? Can one song fill two sides of vinyl and be made up of several 'suites'? Aren't those 'suites', 'songs'?

Welcome to a song poll unlike any other. Voted for by the public, Prog writers, and leading prog artists, this isn't a poll, it's an epic, 7 page, 100-part text-cycle – an almighty collaboration piece with a cunning concept: to, like, order progressive music's greatest, y'know, pieces, into some kind of order. Anyway. Enjoy!

‘On Ruth!’ Catchy, complex, sweet, sarky and surreal, the fan favourite that kicks off One Size Fits All encapsulates everything good about 70s-era Mothers, including their marimba/xylophone/vibes player, the incomparable Ruth Underwood.

You say: “Outrageous musicianship, complicated playing and a sense of humour… It doesn’t get any better than this!” Andrew Hapeman

From sinister tone poem into raucous prog rock j’accuse!, Dave Cousins spits out his caustic rebuke to metaphorical vultures picking over a life lost. Strawbs at their fiery, abrasive best.

You say: “Who thought a song about auctioning off a deceased old lady’s belongings could be so powerful?” John Shaw

from The Lamb Lies Down On Broadway (Charisma, 1974)

With an intro by Gabriel, Banks’ keyboard themes and Rutherford’s looming bass-led section, this co-written song, a dramatic account of fear and paranoia, remained a live favourite long after the vocalist’s departure.

You say: “The peak of one of the greatest and perhaps underestimated bands of all time.” Haroldo Teixeira

You say: “I was introduced to this in Edinburgh, Scotland in the early 70s. When I listen to it now, it reminds me of those days.” Peter Hackzell

Unless you’ve been held prisoner in North Korea for the last 40 years, you may have heard this one. Yet its ubiquity doesn’t detract from its status as a masterpiece of genre-hopping, cod-operatic progressive pop.

You say: “Bombastic, energetic, smart and yet incredibly catchy, this song manages to captivate everyone from the hardcore prog fan to pop lovers.” Jonas Wilmers

95) Script For A Jester’s Tear - Marillion

94) Journey To The Centre Of The Earth - Rick Wakeman

Based on Jules Verne’s bizarre fantasy tale, one of the keyboard player’s childhood favourites, this narrated orchestral epic – like a compelling movie in sound – is one of prog’s most famous conceptual compositions.

You say: “The concept, the Moogs, Mellotrons, Clavinet, the gold lamé cape! It’s got it all!” Sean Timms

The title track of Crimson’s eighth album is an astonishing exercise in er, discipline. Each member features equally in a dense mêlée of fluctuating time structures, while maintaining remarkable restraint.

You say: “I don’t know how they pull this off. If you’re going to be someone… be Robert Fripp. If you can’t… then be mediocre.” Paul Bilyea

The late Geoff Mann’s finest hour sees him offer this neo-prog gem everything from spine-chilling falsetto to malevolent spoken monologues to hollering psychosis, as something wicked this way comes over 11 shape-shifting minutes.

You say: “Why weren’t Twelfth Night bigger? Creepshow is as good as anything Marillion wrote.” Michael Staunton

from The Raven That Refused To Sing (And Other Stories) (Kscope, 2013)

A car crash and a ghostly apparition inspire one of The Raven’s many highlights, with a hauntingly clever chorus and heart-rending guitar solo from a peak-of-his-powers Guthrie Govan.

Taken from the classic Misplaced Childhood, this UK No.2 hit single should be play-worn by now, but its musical elegance and Fish’s lovelorn lyrical honesty make it a timeless gateway into the prog world.

You say: “Still the perfect prog pop crossover song after all these years.” Kev Ranson

A song about loss and loneliness, this combines an off-kilter melody with a beautiful sense of quirkiness within a widescreen atmospheric perspective. It represents why the band are visionary.

You say: “One of the few times VDGG went down the more classical route, and it paid off.” Art Brooks

A hit on both sides of the Atlantic when re-released in 1973, Hocus Pocus’ heavy metal rondo encapsulates Focus’ classical and rock fusion. And premium deployment of yodelling and whistling.

You say: “Though it is a shame that this is the only Focus track that ever really gets played these days, it is such a classic that it can’t be ignored.” James Sawer

87) Shadow Of The Hierophant - Steve Hackett

The lengthy song that shows Hackett could replay his trademark guitar motifs from his Genesis days, yet still stretch out beyond prior confines. On this, Hackett emerges from his previous band’s shadow.

You say: “The greatest song Genesis never recorded, by the most underrated guitarist in prog.” Page Pearce

After 1981’s Moving Pictures, Rush further explored their electro side on Signals, and their facility for merging prog smarts with new technology is in evidence on this infectious protest against conformity.

You say: “The fact that it mirrors the human experience of the listeners is what makes it such an enduring gem.” Regan Fox

Living proof that music can be both smart and emotional, Tool have never sounded more powerful than on this dark ballad from Lateralus. From Justin Chancellor’s unmistakable bass riff onwards, it’s prog perfection.

You say: “Very hypnotic basic theme, constantly evolving until it blasts the listener away with that furious finale.” Stefan Kamphausen

Take a wryly observational song, add a kaleidoscopic pinch of Stockhausen-style atonality, throw them into the blender, press play, and then stand back as pop music’s ambitions are irrevocably altered.

You say: “The Fab Four at their proggiest. Every band listened and learned from it.” Sal Ashcroft

Lake recorded the bittersweet folky ballad alone; Emerson returned from the pub and whacked that enormous Moog solo over the end. Somehow the opposites meshed and a melancholy monster was born.

You say: “A wonderful track – beautiful and thought-provoking at the same time.” Ken Lamb

You say: “This song just radiates joy. For all of its complexity, it sounds effortless.” Niels Hazeborg

The Greek myths’ epic album 666 was inspired by Sgt. Pepper, Tommy and the apocalypse. Its thrilling stand-out cut quotes Revelation 6 and graduates from wind chimes to that ever-escalating wah-wah solo.

You say: “Who’d have thought Demis Roussos could make such epic prog?” ‘aligordon’

from The Human Equation (2004, InsideOut)

A full-blown 102-minute prog metal symphony with an all-star cast including Devin Townsend and Heather Findlay, The Human Equation is also an immersive, elaborate psychodrama with a really skewed sci-fi twist. None more prog, basically.

You say: “Arjen Lucassen is a genius, and this proves why.” Billy Munns