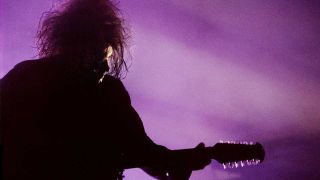 From its dark beginnings in the nihilistic grandeur of Bauhaus’ deeply influential In The Flat Field, to its heyday in the early 80s when The Cult set the scene on its head with the startling Dreamtime and Love And Rockets opened up America with Seventh Dream Of Teenage Heaven, to the goth metal boom of Type O Negative and on through to the noughties, when the twisted vision of Marilyn Manson and Finland’s The 69 Eyes revamped the genre, we take you through three decades of the finest, darkest moments forever set outside the mainstream.

Described by Steve Coogan’s Tony Wilson in the movie 24-Hour Party People as having “all the energy of Joy Division but better clothes”, ACR – their name taken from a Brian Eno lyric – evolved into post-punk funk, but their beginnings (this second single followed Shack Up, in 1979) were distinctly Bauhaus-like.

All Night Party, produced by Martin Hannett, barely touches drums but effortlessly etches its heavy groove from ominous bass, scratchy guitar and a vocal which culminates in witnessing a stabbing (‘I work all day, I drink all night, my life is just an angry blur’), making this the least festive, most compelling all-nighter imaginable.

Bauhaus were the band that perhaps first articulated gothic music. On this, their stunning debut, the focus is precise and monochrome, the attack powerful and anarchic, the feel bleak and unforgiving. And yet through all the sense of nihilism there’s something undeniably uplifting about Bauhaus’s unity of purpose, their relentless pursuit of what, oddly enough, feels like glorious nothingness.

With bassist David J and drummer Kevin Haskins rumbling away in the background, all quasi-funk bass runs and far-off tribal rhythms, the floor is left to guitarist Daniel Ash and vocalist Peter Murphy to create the magic, a kind of bastardised version of Ronson and Bowie’s glam duo turned into vampire musicians with a need to confess a multitude of sins.

Listen to Stigmata Martyr and you’ll feel there’s something altogether unholy going on. Ash pulls sounds never heard before from his guitar, while Murphy’s highly stylised vocals demand you pay your fullest attention. This is a dense and demanding listen, but ultimately it’s a hugely rewarding one.

The fourth Siouxsie And The Banshees album bewitched and bewildered the post-punk generation, proving the band to be much more than just punk-era chancers and establishing them as serious, transgressive artists with a unique voice and vision and a sound that entranced with style and subversion.

The album is thrilling and tense. From the exhilarating opening salvo of Spellbound through the sweeping-stuttering drama of Monitor to the menacing Voodoo Dolly, it’s a work which fuses ugly unease and startling beauty like the films of Alfred Hitchcock, and also Luis Buñuel

Juju reached number seven in the UK, staying on the album chart for more than four months. Its reputation has stayed strong. In the mid-90s, Melody Maker hailed it as “one of the most influential albums of all time”, while The Times, in 2004, described the band as “full of daring rhythmic and sonic experimentation…

But Siouxsie Sioux herself had no truck with the idea of her band being a template for ‘goth’. “Juju had a strong identity, which the goth bands that came in our wake tried to mimic, but they simply ended up diluting it. They were using horror as the basis for stupid rock’n’roll pantomime.”

“I wanted to make the ultimate fuck-off record,” said Robert Smith of his band’s fourth album. “And then The Cure could stop.” He achieved the first aim, if not the second, with Pornography, arguably the bleakest, most depressive record of the 1980s.

Entering the pop landscape in May 1982, the same month that saw Barry Manilow’s Barry Live In Britain give way to Paul McCartney’s saccharine Tug Of War at the top of the album charts, to say it sounded like nothing else was an understatement. Unrelenting and claustrophobic, it was panned panned upon release.

Rolling Stone called it “the aural equivalent of a bad toothache”, but it mattered little. Cure fans, enthralled by the dark lyricism and minimalist sonic landscapes established on previous albums Faith and Seventeen Seconds, lapped it up. It ultimately made Number Eight on the UK chart, and became the foundation stone for a trilogy that would eventually be completed by the similarly crepuscular Distintegration and Bloodflowers.

Experimental beginnings Barnsley’s finest had played Leeds’ Futurama 2 festival alongside Soft Cell and Siouxsie before releasing this debut in 1982. While the press sometimes labelled them with the “goth” tag, their rhythmic, experimental sound was often closer to Northern peers like Comsat Angels.

Here, Ambition lures you in with three minutes of electro pulse before the drums kick in – a dramatic intro technique The Sisters Of Mercy later often employed. My Heart is as prescient in its use of synths as early Simple Minds, while Godsend is a whirl of metallic chimes, drones and screams, with lead singer Steve Rawlings suggesting that this is ‘where the nightmare ends’.

For The Danse Society, the dream was just beginning, albeit to fade with their 1986 split.

Unbelievably, Song To The Siren was originally released as a B-side to the Sixteen Days-Gathering Dust EP. Effectively a Cocteau Twins release (as it featured Elizabeth Fraser and Robin Guthrie only), the song took on a life of its own, became the A-side of the single, and gave legs to the goth supergroup concept.

Originally written by Tim Buckley (Fraser would later be involved with his son, Jeff Buckley), the song was first recorded by well-known goth Pat Boone. The song so beguiled director David Lynch that when he was denied usage of it for his movie Blue Velvet he hooked up with singer Julee Cruise and composer Angelo Badalamenti to make music in a similar vein.

The Aston brothers, Jay and Michael, of Porthcawl, have never been credited as progenitors of the post-punk/goth style in the same way as, say, Siouxsie Sioux, Ian Astbury or Peter Murphy. But the Welsh boys’ debut album, Promise, had as many of the elements that came to define the movement as Dreamtime, Juju or In The Flat Field.

The tribal drums, shimmering riffs, spooky bass lines and slightly hysterical vocals are all present and correct, while the naturally theatrical Astons add both a touch of androgynous sex appeal and arthouse lyrical bent to proceedings. Promise is the sound of glam rock refracted through punk and an almost overwhelming desire to escape a humdrum British existence, to transcend it, actually.

There’s no doubt that the album’s a period piece. It’s utterly impossible to imagine a track like Scheming being written today. But as a snapshot of a moment in time it’s superb, with an impressive sense of self and a commitment to the songs that is absolutely palpable. Despite knowing a thing or two about melody, Promise isn’t an easy listen. But you wouldn’t expect anything less from an album featuring a song called Shower Me With Brittle Punches, would you?

Alien Sex Fiend took the corpse of rock music, strapped it to a table, did unspeakable things to it, then shot it full of electricity and brought it back to life. Well, ‘life’ is perhaps too strong a word: like Frankenstein’s monster, the undead beast they created was damaged, brutal and naive. Their songs weren’t composed, they were decomposing. A weedy Lahndahn voice caterwauling over a frequently atonal racket, ASF were Alice Cooper’s shock rock taken up a punk rock cul de sac – and then taken roughly from behind.

Acid Bath is their high water mark and their biggest seller – coinciding with two John Peel sessions that year that introduced them to the crimped-haired masses of Thatcher’s Britain. You could mistake it all as schlock but between the lunacy and gore was the sense of a band genuinely reflecting their age: the death disco throb of Dead And Re-Buried belied it’s pro-veggie message (‘Never eat anything with a face on it’).

Hee Haw Here Come The Bone People saw the electro-punk replaced with skull-crushing layers of guitars as Nik Fiend turns his gaze to a generation racked by solvent and amphetamine abuse (‘Who is the man? Give us a clue/Living on thinners, you’re choking on glue… Blood runs from my nose’). It’s grimly fiendish.

The word ‘gothic’was apparently first used in a musical sense by Factory record boss Tony Wilson to describe Joy Division’s Northern grimness. Despite coming from Worcestershire, And Also The Trees followed in Joy Division’s footsteps to an extent: mournful and worldweary with a bass sound that echoed Peter Hook’s (but without the pop, er, hooks).

The band’s first demos were produced by Robert Smith and their 1984 self-titled debut album by The Cure’s Lol Tolhurst. Closing track Out of The Moving Life Of Circles is an overlooked gem: as deliciously dreary and dark as anything by the early Smiths or The Chameleons.

I’ve always detested Treasure,” guitarist Robin Guthrie said a decade after its release. “Not because of the record, but because of the vibe at the time, when we were pushed into all that kind of arty-farty pre-Raphaellite bullshit. And so I was just really ashamed of [it].” Bassist Simon Raymonde has commented: “[Treasure] is our worst album by a mile.” Singer Liz Fraser, meanwhile, has described the album’s song titles – and the fans’ search for meaning in them – as “bollocks”.

Don’t listen to them: Treasure is a landmark Cocteaus album, a fan favourite, and one that topped the indie charts in 1984 and even made it into the real Top 40. Such is the contradictory world of the Cocteau Twins – a band that came from the grim industrial Scottish port Grangemouth and made music that sounded like it’d fallen out of the skies.

Beginning life as a sub-Siouxsie goth act, Cocteau Twins soon transcended the genre with follow-up Head Over Heels and this astonishing third album, the first of their ‘classic line-up’ as a trio with Raymonde. Singer Elizabeth Fraser’s cooing, soaring, soothing vocals, which sound permanently on the verge of orgasm, are the perfect match for Robin Guthrie’s inspirational use of textures and effect.