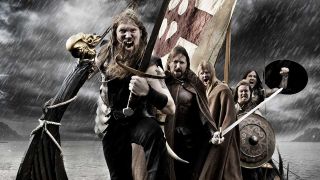 Ahh, Swedish metal bands: with a population just shy of 10 million, Sweden has absolutely no right to produce as many great bands as it has over the last few decades. The rest of the world will always point to Abba as the country’s greatest contribution to modern music, but that’s just stupid and wrong.

Dedicated purveyors of balls-out doom metal since 1984, Leif Edling’s seminal crew were paying tribute to Black Sabbath long before the stoner and doom scenes erupted, and their first two albums – Epicus Doomicus Metallicus and Nightfall – are among the most revered records in metal history. What has always made Candlemass a cut above their peers is Edling’s ability to write stunning riffs: Tony Iommi aside, it’s hard to think of anyone that has written as many cast-iron winners. Meanwhile, despite splits, hiatuses and regular lineup reshuffles, Candlemass are still out there spreading the doom gospel with utmost class and power.

It hardly needs restating that Meshuggah have been insanely influential over the last 27 years. The entire djent/tech-metal scene grew from a collective obsession with the Swedes’ polyrhythmic might and disregard for the metal rulebook, but Meshuggah’s impact has spread much further than that: their embracing of new technologies and new ways to sound disgustingly heavy have cast a shadow over the entire 21st century metal scene. And, thrillingly, they have retained their mystique, their reputation for always upping the ante and their status as one of the most mind-blowing live bands on the planet.

It took the UK more than a decade to truly get to grips with Amon Amarth’s Viking-inspired bombast, but since the huge success of Twilight Of The Thunder God in 2008, the Tumba titans have looked increasingly like world beaters. The magic lies in the band’s remorselessly straightforward musical approach, the consistency of their Viking-inspired lyrics and imagery and, most importantly, their utter devotion to being an unapologetic flames ‘n’ fury heavy fucking metal band. Recently celebrating their 25th anniversary, they’re still getting bigger and better. Raise your horns!

No list of Swedish metal bands would be complete without the mighty Bathory. One of the most influential bands to come out of the country, Bathory pioneered Viking metal and are often credited with helping to create black metal. Their first four albums – Bathory (1984), The Return...... (1985), Under the Sign of the Black Mark (1987) and Blood Fire Death (1988) – are generally considered to be the blueprint for Scandinavian black metal. Following the last of these four landmark albums the band shed its early blackened style and released the record Hammerheart (1990), the quintessential Viking metal album.

Mainstays of of the Gothenburg melodeath mafia, In Flames formed in 1990 and swiftly evolved to become one of the most influential metal bands of the ‘90s via classic studio efforts like Colony and Clayman. You only have to listen to any half-decent metalcore album to hear the influence of the band’s trademark sound, but beyond their status as pioneers, In Flames have also released a huge amount of great records while exhibiting a collective enthusiasm for evolution that has kept them afloat – and relevant – for nearly three decades.

Initially active from 1990 to 1996, At The Gates didn’t received the credit they deserved first time round, but even though the Gothenburg quintet split shortly after the release of their now classic Slaughter Of The Soul album, their impact on the entire metal world is still being felt today. More extreme than In Flames but still armed with some ridiculously catchy songs, the band even managed to pull off a dignified and exciting comeback in 2014 when they reunited to release At War With Reality, an album that cemented the Swedes’ notoriety and provided a timely reminder that the originals are nearly always the best.

Yes, they’re the band that brought us The Final Countdown and yes, the ubiquity of that song has done a certain amount of damage to their reputation within the metal world, but a) The Final Countdown is awesome and b) Europe were simply one of the sharpest and smartest melodic heavy metal bands of the ‘80s. Listen to the Stockholm residents’ second album Wings Of Tomorrow for all the proof you need. Impressively, since reforming in 2003, Europe have reinvented themselves as a superlative bluesy hard rock band with several strong new albums under their belt. And they’re still fucking brilliant live.

An absolute no-brainer for anyone that likes their heavy music to be both interesting and distinctive, Opeth have been following their uniquely progressive path for over 25 years, seldom putting a creative foot wrong and producing some of the most beautiful and original albums are metal has ever witnessed along the way. From early explorations like Morningrise and the Earth-shattering Blackwater Park through to recent triumphs like Heritage and Pale Communion, Mikael Akerfeldt’s artful warriors have smashed down the wall between metal and prog like no one else and their artistic journey is one of the most fascinating ongoing phenomena in our world.

Formed in 2006, Tobias Forge's Ghost have taken the world by storm – owing to their theatrical stage presence and catchy classic rock riffs, all of which is meticulously planned out and designed by Forge. Within ten short years, the band captivated audiences young and old and have established themselves as major players within the rock and metal scenes.

Masters of melancholy since 1991, Katatonia began as students of the death/doom code, but have since transformed into one of the most idiosyncratic and consistent bands in the metal realm. Early works like Brave Murder Day exhibited a refined sense of sorrowful grandeur, but as the band grew in confidence, so their songwriting chops matured, resulting in heartbreaking masterworks like 2001’s Last Fair Deal Gone Down and this year’s jaw-dropping The Fall Of Hearts. Still firmly rooted in metal, but with a purposefully diverse sonic palette at their disposal, Katatonia are true originals to be cherished.

You might think they’re a bit silly, but Falun titans Sabaton are one of the biggest power metal bands on the planet right now. With their military schtick and tank that actually fires into the crowd, their live shows have become festival favourites, earning themselves a headline spot at Bloodstock 2019. Drawing from historical battles, war, and generally succeeding in acts of combat like Big Burly Blokes do, Sabaton are very self-aware in their brand of fist-pumping, super-macho power metal, planting tongues firmly in cheeks. Of course, its not all battlegrounds and bloodshed, the lyrics to their joyous track Metal Crüe is made entirely of band names. But let’s face it, Scandinavian power metal is the best music to drink to. Cheers!

Sweden is universally known as the birthplace of melodic death metal, but the Swedes had their own black metal scene alongside their neighbours in Norway too. Mayhem's Per Yngve Ohlin, otherwise known as Dead, is a black metal icon – and he hailed from Sweden. Dark Funeral are perhaps one of the most prominent acts within Sweden's black metal scene. The band have released six full-length albums since their formation in 1993 and toured with the likes of Cannibal Corpse, Dying Fetus, Nile and Dimmu Borgir.

Evergrey are the great unsung heroes of Swedish metal. Widely regarded as a progressive metal band, they are in fact entirely unique, with a sound that is as contemporary and crushing as anything out there, but with the unique addition of leader and frontman Tom S. Englund’s extraordinarily soulful voice and lyrics. Evergrey write big, epic and wildly distinctive heavy metal songs that exert colossal emotional power. Quite how they’ve avoided becoming insanely huge is anyone’s guess, but it’s never too late to dive into their immaculate catalogue of wonders.

The infamous black metallers Watain are best known for their intense live shows, involving real animal carcasses, blood, Satanic rituals, candles and pyrotechnics. The smell of their gigs alone is enough to turn most off, but that of course is part of their appeal. However, these antics have also caused controversy, with allegations of animal abuse and a notorious show in Brooklyn, where the audience members were doused in the animal blood, reportedly causing some audience members to vomit. Brutal.

Formed in 1987 under the name Nihilist, Swedish death metal pioneers Entombed helped put Sweden on the musical map in the late 80s/early 90s alongside Dismember, Grave and Unleashed. Influenced initially by bands such as Celtic Frost, Sabbath, Slayer, Death, The Misfits and Motörhead, they later incorporated elements of garage rock into their repertoire, moving away from their original "buzzsaw" guitar tones, however, inventing a sound later referred to as death 'n' roll.