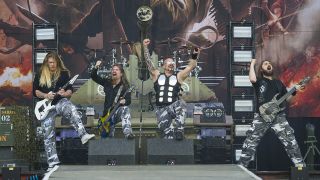 Sabaton have been confirmed as the first headliners at next year’s Bloodstock Open Air.

The UK festival will take place at Catton Park, Derbyshire, on August 8-11, 2019, with the Swedish outfit closing out the Friday night at the event.

“The first time in 2009 we played Bloodstock, it was a tiny set of 30 minutes and we played at lunchtime. This time, it’s going to be a full headline set and we’re coming all guns blazing.

“The show at Bloodstock next year will be the only Sabaton show in the UK in 2019, so if you don’t want to miss us, that’s where you have to be. See you there!”

Check out the band playing Metal Crue at Bloodstock back in 2015 below.

Early bird tickets for Bloodstock are now available, while dozens more artists will be revealed in due course.

Bloodstock organisers have also announced that this year’s festival raised £11,872 for Teenage Cancer Trust via the guest list scheme, on-site donations and through the charity's stall at at the festival.

They say: “Thank you to everyone who donated.”