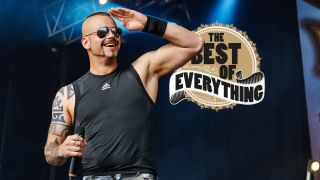 Sonisphere Knebworth, 2010. Saturday morning. Alice Cooper-aided hangovers plagued all in attendance – even the kids were feeling it. Everyone just wanted to curl up and whimper until Rammstein’s set. Thankfully, a troupe of war-obsessed Swedes pummelled the Saturn Stage with the subtlety of Jar Jar Binks on a blind date; Sabaton converted a field full of punters that day and haven’t looked back.

Since then, the power metal monsters have clambered up festival bills and headlined bigger venues – they regularly pack out London’s Forum whenever they march into town. Bloodstock Festival gave Sabaton a shot in 2009. They were one slot from the bottom of the bill. Now they’re set to return in August and this time, they’re bringing a tank with them. What a difference six years makes.

The strength of Sabaton’s recent material is undying. Last year’s Heroes is up there with the best of them and ensures the group will be going nowhere save for the upper echelons of heavy metal royalty. In celebration of this – and as we count down the hours, minutes and seconds until they steal the weekend at Bloodstock – we delve into the vaults and pick 10 pre-2008, pre-The Art Of War slices of Swedish metal…

LIGHT IN THE BLACK (Attero Dominatus, 2006) This is how to do a ballad. We’ll push The Hammer Has Fallen under a rug, set fire to it and jettison it into space because Light In The Black is superior in every way. Undeniably epic guitar/synth harmonising and crudely delivered backing vocals emblazon the track with potential, making this number a precursive step towards Cliffs Of Gallipoli two years later.

PRIMO VICTORIA (Primo Victoria, 2005) The ultimate Sabaton singalong and a certified calorie-burner. When this track hits, you jump. Even in their relative infancy, the band still managed to pull tunes this massive from whatever cavity. Differing from the aforementioned Shadows, the cheese-drenched synth follows the vocal melody this time, allowing the axes to dance around it.

MASTERS OF THE WORLD (Metalizer, 2007) Sabaton’s Bon Jovi moment. Played over the P.A system at the end of their gigs, Masters Of The World hasn’t been aired live in ages and we demand its reinstatement. Lyrically, it’s one of the most phoned-in odes Brodén’s ever penned; generic guff about “disco everywhere” and the desire to “party all night long” is laid on thick and that’s kinda the point. It’s an anthem and, even stripped of their so-called gimmick, Sabaton still rock on this most basic of tracks. Oh, and there’s not one but two cheeky key changes in the final choruses. Lordi, reassess your relevance.

INTO THE FIRE (Primo Victoria, 2005) We’re suckers for a bit of phaser. There’s phaser. We get all dewy-eyed over well-placed gang vocals. There’s gang vocals bellowing “NA-PALM!” – this couldn’t be more manly if you pumped it full of testosterone and dressed it up as a lumberjack. Brodén is a criminally underrated songwriter and, when coupled with the brainpower of bassist Pär Sundström, Sabaton just becomes unstoppable. Into The Fire rivals Primo Victoria’s titular track as the album’s crowning moment, amalgamating victorious soloing and angelic keys with some pretty pitch-black lyrics regarding the Vietnam War’s napalm drops.

HELLRIDER (Metalizer, 2007) A brutish, simplistic number stolen and re-recorded from 2001’s Fist For Fight demo, Hellrider is a thrashing attack that would sow the seeds for songs like Lion From The North later down the line. A blistering guitar solo exhibits several melodies that we’d now associate with Dragonforce; Brodén’s grunts assure us that we are, however, still listening to Sabaton.

PANZER BATTALION (Primo Victoria, 2005) Power metal’s never really been viewed as politically charged, so for Sabaton to do a Rage Against The Machine was pretty ballsy on their behalf. Panzer Battalion recounts the 2003 invasion of Iraq and, while the spooky keyboards and gang vocals make this an instant winner, the lyrics are genuinely biting: “This time we’re here to finish a job started a decade ago…” Telling the tale from the eyes of the invaders was a risky move, but it paid off in dividends; this proved Sabaton wasn’t just a gimmicky gaggle of history nerds, but courted controversy as a result. Oh well. It could be worse. They could have gone full-on gonzo terrorist (see Slayer: Jihad).

METAL CRÜE (Attero Dominatus, 2006) No, that’s not Brodén trapping his nads under some tank treads – guest vocals from Christian Eriksson kick this off with a high-pitched, vibrato-laden wail. The lyrics are all moulded around bands that have inspired Sabaton, morphing every iconic act under the sun into a witty turn of phrase; when it’s put this way, you can hear how the likes of Judas Priest have infected Sabaton’s sound and provided a set of stones that set them apart from their contemporaries.

METAL MACHINE (Primo Victoria, 2005) A similar premise to Metal Crüe, but with awful euphemisms thrown in. No, we don’t want to suck your metal machine.

NUCLEAR ATTACK (Attero Dominatus, 2006) While most fans view Attero Dominatus as a slight step down from Primo Victoria, it’s tunes like Nuclear Attack that bolstered Sabaton’s second full-length (or third, depending on how you view Metalizer). A typical, galloping tune by the band’s usual standards suddenly delves into a crushing mid-section reminiscent of a stringier, Cowboys From Hell-era Pantera having a ping pong duel with Iced Earth; it soon rides back into cheesy territory, but this little flourish was a welcome deviation before the obligatory key change and fist-pumping path to glory.

For more information on Bloodstock, visit the festivals’ official site.