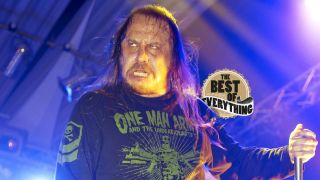 Deep into an intensive rehearsal period with Entombed AD, frontman LG Petrov greets TeamRock with the proviso that he hasn’t listened to much music for a while.

“When you get home you’re pretty tired, you want to have quiet,” he explains. These, though, are the 11 songs that made the most profound impact on the teenage LG. He was drumming for ultra-cult black metal demo legends Morbid in 1987 at the age of 15, before switching to vocals and joining Swedish death metal trailblazers Nihilist, who became Entombed in 1989.

“I don’t know if I can go that deep because I don’t remember too much!” he stresses, with a gleeful but sinister giggle. “My head is full of lyrics right now.”

Nevertheless, TeamRock managed to coax out some fevered reminiscences of his awestruck adolescence in that hallowed mid-80s era, when new boundaries of extremity were being pushed back every week. Of the records and tapes themselves, LG assures us: “All these things are in my mother’s cellar.”

MOTÖRHEAD – Back At The Funny Farm (Another Perfect Day 1983)
“Lemmy did everything right. This was the first album I ever owned – I didn’t buy it, my mother actually bought it for me! There was no Led Zeppelin or anything, I went straight in with Motörhead. Another Perfect Day is still my favourite record of theirs, and the way that first song came thundering out, the bass sound on it… For me, it’s better than Ace Of Spades!”

IRON MAIDEN – Running Free (Maiden Japan, 1982)
“After getting into Motörhead, the next band I heard about was Iron Maiden, so I went out and bought the Maiden Japan live EP. That was excellent, such a good sound. We saw Paul Di’anno just recently with Blaze Bayley, they played together in a really tiny pub here, that was the smallest arena show I’ve ever seen – it was great! It was packed, everyone was singing along and drinking beer!”

BATHORY – Raise The Dead (Bathory, 1984)
“I’ll pick the easy ones! This is a nice, typical Bathory song. We were at the Bathory signing session at our local record store, we got Quorthon’s autograph on our record sleeve – I only met him once. We had a little black metal gang in the 80s, drinking light beer and pretending to be drunk, carrying our portable tape recorder, playing Bathory and causing havoc in town.”

VECTOM – Black Viper (Speed Revolution, 1985)
“We were kids back then, and of course we thought ‘Vectom sounds like Venom!’ So we checked the album out - it was called Speed Revolution, haha! Back then it sounded so heavy. They were from Germany, and German thrash metal was great. Of course now when you go back to songs that you liked 30 years ago, it can be better, or it can be worse. I’ll have to go back over it when I get a chance!”

VOIVOD – Korgüll the Exterminator (Rrröööaaarrr, 1986)
“As a kid, you went from Motörhead to Iron Maiden to seeking out more violent stuff, and Rrröööaaarrr was just total war! Voivod have done many great albums, but at that time they weren’t so technical. I met them last year when they played here with Carcass, Obituary and Napalm Death – what a show. I didn’t actually hear what they played; we were really drunk!”

WHIPLASH – Warmonger (Pleasure And Pain, 1986)
“Excellent thrash metal. We had our local record store, they only had overpriced vinyls but we bought them anyway. I guess we got ripped off, but we got the pleasure of discovering new, great music. In those days you looked at the sleeve and thought, ooh, this looks heavy metally! The Whiplash sleeve had a fist crushing someone’s head, we were like, ‘Wooo!’“

MEFISTO – Frost Of Inferno (Megalomania demo, 1986)
“I just saw Mefisto in December, it was good but the original singer wasn’t there so it was kind of strange. They were about a year before Morbid, so it definitely was influenced by them, but everybody influenced each other in the underground Swedish black metal scene back then.”

DEVASTATION – Beyond Fear (A Re-Creation Of Ripping Death demo, 1986)
“There was another band called Devastation from Texas, but these guys were from Chicago. Their singer Troy Dixler inspired me a lot. You could hear what he was singing! Both demos were really good, but I don’t think they ever got an album out.”

SADUS – Certain Death (demo, 1987)
“Fucking intense. Those high-pitched screams! Great sounding as well. Back then you were always experiencing something new all the time. Steve DiGiorgio on bass of course, he’s the nicest guy in the music industry. We met at some Italian festival, we had lots of beers and Sebastian Bach sang 18 And Life at me in the backstage room!”

CARNAGE – Torn Apart (Infestation Of Evil demo, 1989)
“Michael Amott from Arch Enemy was in them back in ‘88. All those guys are in different bands right now, they’re still around doing the thing they love. They’re the same people really, that’s the cool thing. They’re not pretending to be someone else, they just do what they do. Maybe we can see a reunion sometime? It would be fun!”

NIHILIST – Abnormally Deceased (Only Shreds Remain demo, 1989)
“We’re actually gonna rehearse that one today! There are so many songs, but that’s the first one that comes into my mind. It ended up on the Entombed debut, Left Hand Path. I remember the Nihilist demo version to be excellent, but I haven’t heard it in a while.”

Entombed A.D. release their new album Dead Dawn on February 26 through Century Media. The band are currently on tour with Behemoth, Abbath and Inquisition. For dates, see their Facebook page.