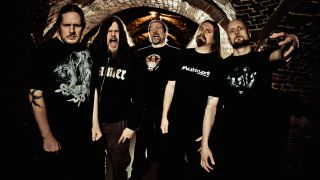 Although ‘djent’ was coined by Meshuggah’s Fredrik Thordendal back in the ‘90s when describing a double octave palm-muted power chord, I actually only became aware of the term when Periphery made their ‘Got djent?’ T-shirts. I could be wrong, but I think Periphery’s humourous merch was the major catalyst in popularising the word.

The D word definitely had its place towards the end of the noughties, as it was the name given to a community of bands who were experimenting musically, predominantly self-producing their sounds (in bedrooms) and all striving to do something fresh and new. Most of the bands had a shared love of Meshuggah and their very unconventional approach to metal. However, as a subgenre classification today, it’s very much redundant, as the bands who were collectively labelled ‘djent’ have evolved way beyond what they were doing back then.

All the bands in this playlist are key to the movement’s development and evolution, however the root of the it was in the internet forums frequented by Acle, Misha Mansoor (Periphery), Paul Ortiz (Chimp Spanner), John Brown (Monuments) and a few others… these individuals built up significant online followings, before even getting bands together. While this was going on, there was the American tech-deathcore thing going on which included Veil Of Maya, Born Of Osiris, and Reflux, whose guitarist Tosin Abasi went on to form Animals As Leaders. Other bands who fed into it were Textures, who were doing their own thing in Holand and inspired a lot of bands under the djent umbrella.

There was also cloudkicker who was simply doing his own post rock/prog metal thing in a bedroom somewhere, and didn’t actually want anything to do with the music biz until he was convinced to tour the States last year, opening for TesseracT. Oh, and there’s a band called Meshuggah, without whom, none of the above would exist.

MESHUGGAH – Soul Burn (Destroy Erase Improve, 1995) For me, the Destroy Erase Improve album is where it all started. With this record, Meshuggah’s signature jazz-fusion inspired brutality took metal in a direction no one could have predicted. This song is probably the most obvious early recording of the distinctive ‘djenty’ double octave chord sound. The song will be 20 years old later this year and and it’s sounding fresh.

SIKTH – Hold My Finger (The Trees Are Dead & Dried Out Wait for Something Wild, 2003) The tech band before tech was even a thing – a whole decade before. Chaos and melody combined in ways no one had heard before at the time. This track still gets the mosh pits going!

TEXTURES – Laments Of An Icarus (Silhouettes, 2008) Probably the most unsung heroes of the scene, Textures have been writing ground breaking progressive metal for well over a decade. This song always sends shivers down my spine when I see it live, and it’s one of the few riffs that still tempt me into a pit!

PERIPHERY – Zyglrox (Periphery, 2010) Periphery were the first band to break out of the bedroom/online nerd forums and are to this day one of the most impressive bands in metal hands down. I love this song as the riffs are like a taking your fingers to the gym for a mini work out – and they sound great whilst doing it.

CHIMP SPANNER – Bad Code (At the Dream’s Edge, 2010) Paul Ortiz is another of the first forum nerds and his take on the sound focused on soundscapes with a clear nod Sci-fi. Bad Code is one of the heavier tracks that tells the life story of a computer virus and it’s brilliant.

MONUMENTS – I, The Creator (The Amanuensis, 2014) Guitarist John Browne was another of the early forum-ites and was in Fell Silent with Acle before the band split. Monuments and Tesseract became the focus of the two respectively. This song has killer riffs as expected, and the introduction of Chris Barretto on vocals has helped them create one of the genre’s best ever records. This is the opening track.

AFTER THE BURIAL – A Wolf Amongst Ravens (Wolves Within, 2013) Huge riffs and grooves from one of the most impressive live bands that metal has seen. Tragically guitarist Justin Lowe passed away earlier this year, which is totally gutting. Here’s hoping that the band pull through this tough time and get out there again, as they really are one of the best around. RIP Justin.

BORN OF OSIRIS – Divergency (Tomorrow We Die Alive, 2013) Riffs, electronica and shred. Three of the best things in the world and Born Of Osiris are masters of all. Divergency is one of their simpler track which is carried by one huge riff… and the ending… just wait for it!

ANIMALS AS LEADERS – Physical Education (The Joy of Motion, 2014) Hailed as some of the best musicians in the world at the moment and for good reason as they are ridiculously talented. Physical Education is a lesson in groove and hooks which musicians from any genre could learn from, a must listen for anyone who plays music. They have a ridiculous sense of humour to match, just watch this video.

HEART OF A COWARD – Hollow (2015) Heart Of A Coward use a lot of the genre tricks and methodology, but strip back the frills to create a barrage of metal brutality that will still retain the interest of the nerds, but appeal to the pit crew as well. Their new song Hollow is incredible.

THE ALGORITHM – Isometry (The Algorithm, 2012) The Algorithm is bonkers electronica meets djenty metal, and the track Isometry is one the most hectic. It was a b-side a few years back and is essentially hard breakcore with a djent sensibility. It’s a bit tough on the ears, but that’s why I love it.

VEIL OF MAYA – Punisher (Eclipse, 2012) Veil Of Maya will make you bounce until you can’t bounce any more! Punisher is a quick taster of one of the bands who helped shape the US scene and are one of my favourite bands from that side of the pond.

HACKTIVIST – Deceive And Defy (single, 2014) Hacktivist have created a unique sound that has gained attention from the wider metal world and way beyond. They have plenty of killer songs, but I think this is one of the best. The riffs are so crushing!

TesseracT will release their new album Polaris on September 18 through Kscope. For more information, visit their Facebook page.