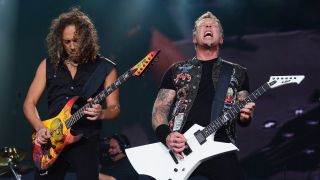 As another year comes to an end it’s time for us to look to the future, and the records that will shape 2016. Will the likes of Marmozets and Architects take their UK success worldwide? Will Gojira and Killswitch Engage take the momentum they’ve created and turn it into yet more killer music? Do veterans like Korn and Deftones still have it? Will this be the year we finally see new music from studio shy megastars Metallica and Tool? And what the fuck is the new Babymetal album going to sound like? We take a look here.

Metallica
All the signs point to the fact that we should see a follow up to 2008’s Death Magnetic in the next twelve months (unless Kirk loses his phone again of course). It’s no secret that the world’s biggest metal band are currently working things out in the studio, with recent clips of James Hetfield laying down some guitar parts for what would, we assume, be new material having been uploaded onto the bands official website. With Kirk Hammett revealing in a recent interview “You will see a new Metallica album, and it will most likely be in 2016” it seems we are tantalisingly close. What it sounds like we can only speculate, but the same interview saw Hammett comparing Metallica’s new stuff as being “along the same lines as Death Magnetic” which we’d take right now frankly.

Deftones
Slightly later than anticipated, Sacramento metallers Deftones will release their eighth album in early 2016. It was originally slated for a September of this year release, but has been put back until the notoriously perfectionist ‘Tones are happy with the outcome of a recording process that happened intermittently rather than in one chunk of studio time. Drummer Abe Cunningham recently confirmed that the album is “being mixed now.” And that although the band are “still in the process of album title, song titles. We haven’t got there yet,” as far as recording is concerned to Cunningham “the music’s done.” Vocalist Chino Moreno has also revealed an unusual inspiration for the latest record; former Smiths frontman Morrissey. “I’ve been on this crazy Morrissey kick recently, totally obsessing over his solo records, so I brought a lot of that to the table.” As long as Chino doesn’t start swinging flowers around we’re sure it’ll be another excellent addition to the catalogue of one of metal’s true originals.

Avenged Sevenfold
After the massive success of 2013’s Hail To The King, a record that hit number one on both sides of the Atlantic and saw the band headline the Download festival, the Orange County superstars will return in 2016 with a new album. And a new drummer. Former Bad Religion sticksman Brooks Wackerman takes to the A7X stool for the first time, and even he doesn’t know what he’s in store for. “I wish I had the answer to that question!” he tells us here at Hammer. “I’m as curious as you are. I do know that, from what we’ve worked on so far, it’ll be a completely different album from the previous one.”

Babymetal
One of the biggest phenomenon’s in the world of metal in living memories, Babymetal will release their new album on 1 April, the day before their massive Wembley Arena headline show, before heading out on a world tour that will take up the majority of 2016. Second guessing Babymetal is a dangerous game, but Maometal has told fans “I promise you that we will come up with an album that will betray your expectation – in a good way.” So who knows what kind of lunacy will be unleashed on 1 April. One thing is for sure, Babymetal are sure to keep splitting the metal community right down the middle.

Meshuggah
Having celebrated their 25th anniversary last year, Swedish tech-metal inventors Meshuggah will release the follow up to 2012’s Koloss in 2016. It’s been all quiet in the Meshuggah camp of late, but guitarist Marten Hagstrom did reveal back in June that the band were keen to enter the studio after finishing their European festival dates. Since then there has been no news, but Hagstrom did confirm that the album would definitely be out “sometime next year… but not early.” So you can guarantee we will get it, and you can probably guarantee it’ll leave you feeling a bit dizzy when you hear it.

Letlive.
One of the most exciting live bands on the planet, Letlive. will release their fourth album in 2016. And the follow up to the critically acclaimed The Blackest Beautiful will hopefully be out before the band head on the road for European festivals in the summer (they’ve already been announced for Grozerock in May), as their official Twitter account confirmed the album is finished in September. It read “We recorded a new record this year – it will come out next year. Thank you for being a part of this with us. Now go tell someone about it.” So we’re telling you.

Marmozets
Having released one of the most exciting British debut albums in recent memory – which took them from underground curio to the main stage at Reading and Leeds festivals – the pressure is on for Marmozets to deliver on the follow-up to The Weird And Wonderful Marmozets. The band have taken the holiday period off to recuperate after their manic 12 months, but plan to have the new album out at some point in 2016. And drummer Josh Macintyre has claimed that “The stuff we’re writing I personally think blows the first album out of the water.”

Korn
The Bakersfield veterans and godfather’s of nu metal have already teased the release of their 12th album, which guitarist Brian ‘Head’ Welch claims the band will “come swinging back next year.” Predicting that the new record will see the light of day in the autumn of 2016. Excitingly Head also claims that the new material will be a return to their heavy roots. “I’m a metalhead so I keep saying I think this album is going to be heavier. I just want heavier all the time. That’s what I’m leaning towards.”

Architects
After the success of the incredible Lost Forever//Lost Together album that saw them headline the historic Roundhouse in London, could this be the year that Architects build up to yet another level of popularity? You’d not bet against it, and, with a new album currently being written and a Download festival performance confirmed for 2016, this could finally be the year that Architects fully pollute the mainstream with their furiously intelligent metalcore.

Gojira
French eco-metallers Gojira have confirmed that 2016 will be the year that they finally release the follow up to 2012’s stunning L’Enfant Sauvage. Although the band had hoped to have the album out already, they decided that the material written was not up to scratch and scrapped everything to start afresh. It now appears that the band are happy with the material as drummer Mario Duplantier revealed “The recording process is almost a detail. The most important thing is the songs. So the songs are here.” Expect it to see the light of day in the autumn.

Rammstein
It’s been a while coming, but German superstars Rammstein have regrouped and are currently holed up in the studio working on the follow up to Liebe Ist Für Alle Da. The band’s official Twitter account posted a photo of the band working with the simple caption “Rammstein: Es geht weiter!” or “Rammstein: Back on!” So it looks as though the long wait since 2009 for new material is coming to an end, but it’s unlikely the new album will be out before their hugely anticipated headline slot at the Download festival.

Killswitch Engage
Having roared back into life with the return of Jesse Leach, some of the best live sets in the band’s career and the superb Disarm The Descent album, KSE now have the task of bettering what has already been a world-beating reinvention. And the band have already released a video for new song Strength Of The Mind, which has all the elements you’d want from the metalcore mob, to tease the release of the new album. The record, Leach claims on a long Instagram post, will be out in March 2016, adding that “It’s slowly starting to hit me that the record of my entire career is finished and soon to be revealed to the world.”

Tool
For many fans it’s the golden goose of albums. So will 2016, ten whole years after the release of previous album 10,000 Days, see the release of new music from the world’s biggest cult band? We’re not holding our breath frankly, but the band are heading out on a US tour as, what guitarist Adam Jones calls, “A little break” from writing the new album. And that the sessions are “Going well”. Yeah… that’s all we’ve got I’m afraid folks. We’ll almost certainly be writing the same thing this time next year.