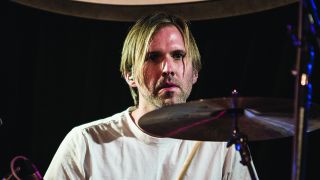 It’s certainly been a trying period for Avenged after the tragic death of original drummer Jimmy ‘The Rev’ Sullivan in December 2009, with ex-Dream Theater sticksman Mike Portnoy filling in for the subsequent Nightmare album, before unknown youngster Arin Ilejay was announced as The Rev’s official, long-term replacement in 2011, going on to play on the band’s hugely successful Hail To The King world tour.

However, Arin surprisingly left the band in July of this year following what guitarist Zacky Vengeance cited as “creative differences”, with the band revealing later on that they’d been working with a new drummer for over a year now. That man turned out to be Brooks, and with the announcement making his addition to the fold official, you’d imagine fans and band alike will be hoping that A7X have finally found some much-needed stability in replacing one of the 21st century’s most iconic and unique drum talents.

“Well, first of all, I’d like to echo those sentiments about Jimmy,” Brooks tells us in an exclusive chat with Hammer. “I’ve spent a while studying Jimmy’s parts and navigating where my voice is in this band. I hope that this will be the start of many records down the road, because we all share the same goals and aspirations for this band. For a drummer, you can’t ask for a much better gig than with these guys, because what they do is so broad. It is metal, yes, but it’s so much more than that, so I feel that I now have avenues open to me that weren’t open to me before. It’s exciting.”

As Brooks explains, he may well have sown the seeds of his appointment many years ago.

“I was playing in Bad Religion when we first crossed paths at the Warped Tour over a decade ago, about 2004,” he tells us when asked how the move came about. “I got on really well with those guys and we’d always bump into each other at festivals. Last year, after they had finished the Mayhem festival, I heard they were looking for a new drummer, and I received a call from Matt asking me if I wanted to go out to dinner. We met up and talked about music and the future and what we wanted to do in our careers, and we just hit it off!”

Brooks’s wealth of experience should bring some interesting dynamics to a band looking to get fully rolling on album number seven next year.

“They’ve been a band that I’ve admired throughout my career, and to get the chance to work with them up close and personal is a tremendous honour,” he adds. “I feel like, coming in as a band-member, this is more inclusive. It’s been a long time since I’ve been in a position like this where I’m there from the inception of the process. This is the most freedom I’ve had as a drummer, creatively, for a long time.”

That must surely mean work is well underway for that new album, so we might as well ask – how’s it sounding?!

“I wish I had the answer to that question!” Brooks laughs. “I’m as curious as you are! We are at the very nascent stage of working on these ideas. I do know that, from what we’ve worked on so far, it’ll be a completely different album to the previous one. There is going to be a lot more risk taken in this one, I can tell you that. And a few more changes here and there. But, really, it’s hard to tell at this stage. That’s all I can say about that. It’s the million dollar question! Ha ha!”

Hey, at least we tried. Good luck Brooks, welcome to the family and you’re not the only person who is excited for the next chapter in the career of Avenged Sevenfold.

A new Avenged Sevenfold album is expected next year

After making his Suicidal debut on an EP and a compilation prior to this, the first post-hiatus ST album, Brooks was called in again to lend some rhythmic groove to Mike Muir’s recently remodelled thrashers.

Brooks’s work was evidently so good that Mike brought him in to spank the skins on the (to date) final album from this ST funk metal side project, also featuring Suicidal alumni Mike Muir and Rob Trujillo and Excel’s Adam Siegel!

Kicking off a six-album run with the punk legends that included their surprisingly good 2013 Christmas album (no seriously, look it up), Brooks first appeared with Bad Religion on their Epitaph debut and, unsurprisingly, did a damn fine job.

Look, say what you want about Avril, but Sk8er Boi is still a jam, so we’re cool with Brooks picking up the sticks for the Canadian pop-rock princess’s second studio album in 2004. The album kinda blew, though, but that’s not his fault.

Dipping his toes in heavier waters, Brooks played on a few numbers from this rather so-so effort from Korn in 2007. Although he did at least play on Evolution, which was actually a pretty good song, so fair play to him.